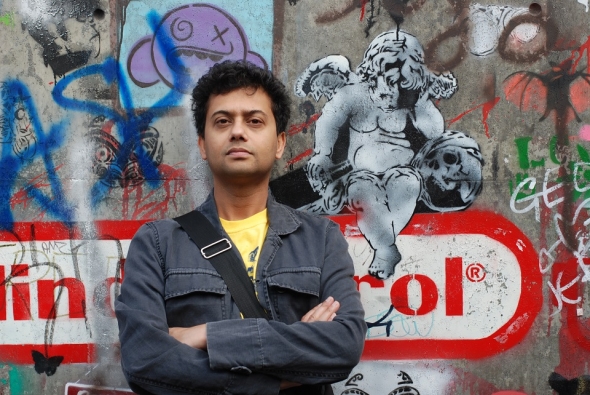 A new novel charts the origins of the Naxalite (Maoist) movement in West Bengal, India and poses questions that remain as the country battles against an insurgency that is still rife in parts of India…

READING from the prologue which is an example of the gut-wrenching realism that is at the heart of his book, Neel Mukherjee said that he finds writing about violence, and there are many violent scenes in his book, difficult.

He said it helps him to write such scenes quickly and that “some kind of subconscious detachment kicks in”. It is only when he returns to it later that he allows himself to feel its impact.

Mukherjee was reading at the launch of his second book, which is set in Kolkata (Calcutta) in 1967. He launched it at the Alchemy Festival at the Southbank Centre last Wednesday (May 21). Called “The Lives of Others“, it tells the story of Supratik, who has become involved in extremist political activity with the Maoists. Compelled by an urge to change the world around him he leaves home one day to join the Maoist insurgency.

They believed that the balance of equality could be bridged only through armed rebellion. A whole generation joined the movement fired by idealism and a desire to make a more equal society, he explained.

However it was a failed revolution, Mukherjee felt. In three months, the movement was brutally suppressed and for years there was no sign that it had survived.

“However, 40 years later, it is a little known fact that 23 per cent of India is under Naxalite rule,” claimed Mukherjee.

He said there is very little discussion about this in India but that the Naxalite insurgency is not going away in a hurry. There are parts of rural eastern India where the Maoists are in control and the state has retreated – former Indian prime minister Manmohan Singh declared the Maoist insurgency India’s biggest issue after terrorism some years ago.

Mukherjee said he set out to write a “bourgeois realist novel” as well as a political one and so “owes a big debt” to “Buddenbrooks”. This is a 1901 novel by Thomas Mann which won him the Nobel Prize for Literature and is also a family saga with a political theme.

The fact that Mukherjee’s book is a big “richly-textured” novel came up for discussion, since it runs into 600-odd pages.

“If you are going to do realism then it should be done with a certain amount of density and detail as you are launching readers into a new world,” he explained. “One way they can believe it is by being totally immersed in it.”

He recalled a reader saying to him: “All that I want from a book is that it must make me inhabit a new world.” Mukherjee says it seems like a modest request, but is a huge task to execute for the novelist. He wanted to explore the lives of every one of the characters in depth. This applied to one of the peripheral characters in the book, a cook, who he said was, in fact, one of his favourite characters.

“Writing a long novel is like throwing a bottle with a message in it into the sea,” he said. He hoped that people would read it but couldn’t be sure they would due to its length and the perception that people increasingly lack the attention span for novels, least of all for a lengthy one.

There is a belief that the novel is dead and that no one will be reading novels in five years, he lamented. Though Mukherjee did not agree, he admitted that there were days when he woke up thinking it might be true and the thought depressed him, but there were other days when he felt it would survive and that people do like to read long novels.

He felt that novels today are technically perfect and can’t be faulted for their prose, but bemoaned the fact that they lack a certain “moral energy”.

A novel is a meditation on good and evil, and though it never tells us what we should be, the beginning of a moral sense is to put yourself in the place of others, he added. This idea of empathy is central to his novel and is reflected in the title.

One of the inspirations for the novel came from an epigraph: “How can we imagine what our lives should be without the illumination of the lives of others.”

There is no point in writing a book unless you can write it compassionately… “Only Naipaul can sneer,” he said to laughter.

As much as the book is about the men going off to fight their battles for a higher ideal, it is also about the women who live in the huge, rambling multi-storey family home, fighting their own battles. The women’s lives are as richly imagined as the lives of the men. Mukherjee said he found Supratik’s mother’s life very interesting.

“It is about the collision of the public and the private. The women are crucial to do this,” said the prize-winning author, whose latest work has garnered much praise from fellow writers.