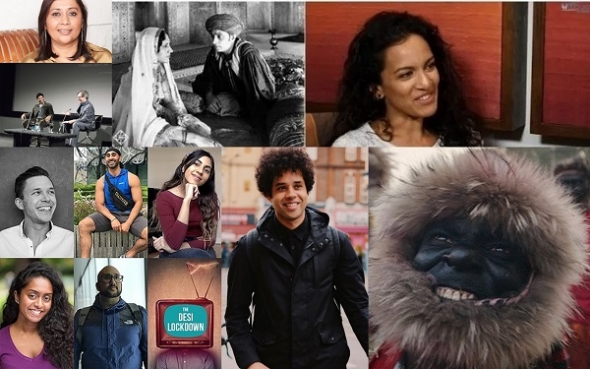 Instead of physically going to attend a film festival – it is coming to you tomorrow and will last 10 days (till June 7).
That’s right, the We are One – a Global Film Festival, is a unique project bringing together many international film festivals and showcasing shorts, narrative features, documentaries and many other genres. There are films from 35 countries and over 100 films to view for free on Youtube.
Among the selections is the award-winning Indian feature, ‘Eeb Allay Ooo’ (picture above) about a man employed to keep wild roaming monkeys, in Delhi, in check. The film proved a big hit at the Mumbai Film Festival (Mumbai Academy of Moving Image which organises the festival) – winning a top award there – the Golden Gateway. It also screened at the Berlinale in February and attracted a lot of international interest. It screens on Friday (May 29) – see details below. ACV had reports on both festivals and the film was mentioned in stories and social media.
Another film which acv readers will have heard come across too is ‘Shiraz: A Romance of India’. Made in 1928 by German Franz Osten and produced by the legendary Himansu Rai, it is one of the most remarkable films to have emerged anywhere at any time. In 2017, the drama which tells the reputed story behind the construction of the Taj Mahal and first written as a play by Niranjan Pal, was digitally restored. It is a silent film and sitar player and composer Anoushka Shankar (picture below) wrote the musical score for the film and it was given a live orchestral accompaniment release at the London Film Festival in 2017 as a part of UK-India celebrations that year, marking 70 years of independence. Shankar spoke exclusively to acv about the challenges of putting the score together for the film. It screens on Tuesday (June 2)
‘Eeb Allay Ooo’ screens UK time 12pm on Saturday (May 30).
‘Shiraz: A romance of India’ screens at 5.45pm on Tuesday (June 2). These are UK times, times on the site are shown for US Eastern Standard Time (EST).
For the full schedule from May 29-June 7 and links to both films, see
http://www.weareoneglobalfestival.com/

THERE’S a chance to catch some of the best recent masterclass sessions from the London Indian Film Festival (LIFF) which is going digital in its 11th year this summer.
Last week, LIFF added a series of interviews and conversations from previous editions of the fest to its roster of Satyajit Ray short film competition winners you can watch from the website (in the UK only) and reported on in this column two weeks ago. These masterclasses which are also available from the BFI can be watched from anywhere in the world. Those featuring in this are actor Tannishtha Chatterjee, actor-director-writer and songwriter; Farhan Akhtar (pictured above with Nick James), cinematographer and director, Santosh Sivan; director Mani Ratnam and Irrfan Khan talking to director Asif Kapadia and also covered in the lockdown listings two weeks ago and referred to in our personal obituary piece.

Running for four days until Sunday (May 31) is the new online South Asian Literary Festival.
Described as a “celebration” of authors of South Asian origin, it kicked off this morning (May 28) with celebrated chef, broadcaster and author Asma Khan in conversation with well-known writer and journalist Sarah Shaffi.
Among the other authors participating are Nikesh Shukla, Preti Taneja, Kavita Puri, Deepa Annapura, Priyamvada Gopal, Meena Kandasamy and Angela Saini.
There’s also a special pre-recorded session on the Jhalak Prize – the literary prize in the UK recognising writers of colour – which has just announced its winner for 2020. See below in And…
You can hear the sessions and should register to participate.
The festival has been created by Dr Pragya Agarwal (pictured), author of ‘Sway: Unravelling Unconscious Bias’ which recently was selected as Book of the Week by The Guardian newspaper.
You can find the full schedule, Thursday May 28, (12pm) to Sunday, May 31 (3.30pm). All times are UK – https://www.drpragyaagarwal.co.uk/south-asian-litfest

Taking a look at how some people have reacted to the lockdown is at the heart of a new series which has just dropped online from Rifco Theatre.
With normal theatre, tv and film production all on hold for the time being, theatre company Rifco invited writer-performers to submit ideas and you can now watch the commissioned pieces.
You can see the five commissioned works direct on the company’s website or on Vimeo. The five writer-performers are Jassa Ahluwalia, Jaswinder Billan, Rahika Jani, Nicky Rose Roshini, and Harry Syed.
Known collectively as ‘Desi Lockdown’, Rifco said: “Each film in the ‘Desi Lockdown’ series explores a different aspect of the lockdown experience through drama, comedy and spoken word.
“From the experience of isolating with family, to the generational divides and new connections we are forming, individual experience and self-reflection and even efforts to try and make your own version of mum’s favourite dish!”
Pravesh Kumar, artistic director of Rifco Theatre, based in Watford, Hertfordshire, said: “We want to remain connected with our audiences so they can be challenged, questioned and entertained from home. In creating this new work, we want to celebrate creativity even in the most difficult of times.”
The company has already put out other digital content including its recent hit play, ‘Mushy: Lyrically Speaking’ and is inviting donations to continue to support its work.
‘Desi Lockdown’ series here https://www.rifcotheatre.com/watch/the-desi-lockdown

*JOHNY PITTS was announced as the winner of this year’s Jhalak Prize for his debut book, ‘AFROPEAN: Notes from a Black Europe’ on Tuesday (May 26) in a special online event.
The writer, photographer, and broadcaster wins the £1,000 cash prize and is the recipient of a special trophy sculpture, ‘Rebirth’ by artist Neda Koochakian Fard.
About a five-month journey Pitts undertook documenting the experiences and lives of black communities in 10 European countries, it is mix of genres from memoir to travel and social commentary.
‘Arfopean’ was unanimously selected the winner by a judging panel consisting of poet, activist and writer, Roy McFarlane, journalist and critic Anita Sethi and novelist and screenwriter Nikesh Shukla and novelist Kerry Young.
McFarlane described the book as “beautiful” and “brilliantly put together; memoir, travel, historical, social and political look into the idea of being black and part of Europe…A praise to the past and a living, breathing documentary of the present.”
The prize open to anyone of colour living in Britain had a shortlist this year, which included ‘Queenie’ by Candice Carty-Williams, ‘Remembered’ by Yvonne Battle-Felton, poetry collection, ‘Flèche’ by May Jean Chan, ‘Suncatcher’ by Romesh Gunasekera, and ‘The Black Flamingo’ by Dean Atta.
The Jhalak Prize was created in 2016 by authors, Sunny Singh, Shukla and Media Diversified.

VERY sadly, one of the most influential figures in Indian independent cinema died earlier this month.
Raja Chhinal was a well-known, much admired and liked executive with India’s National Film Development Corporation (NFDC) – the country’s principal organisation developing independent film projects. Many Indian films such as ‘Eeb Allay Ooo’ were fostered by the NFDC and Chhinal, and many paid tribute to his role in strengthening and enhancing Film Bazaar – the market segment attached to the International Film Festival of India (IFFI).
Chhinal was a prominent figure at international film festivals around the world and there was a huge outpouring of grief and sadness on the announcement of his demise.
He died in Delhi, on May 17, following an infection and treatment for a brain abscess. He was 47 and leaves wife Maneka, and twin daughters, Vanna and Vania.
More here https://www.screendaily.com/news/indian-international-industry-mourns-loss-of-nfdcs-raja-chhinal/5149916.article

If you want to feature in this page for a relevant online offering from late June 3 or 4, please email editor@asianculturevulture.com and please put ‘Listings‘ in the subject line please and send by 4pm on Tuesday, June 2.

Privacy & Cookies: This site uses cookies. By continuing to use this website, you agree to their use.
To find out more, including how to control cookies, see here: Cookie Policy
← ACV Lockdown listings – Women of the World Festival goes digital and Asif Kapadia to talk about Irrfan Khan and other great online offerings…
VE Day: Imperial War Museum’s ‘Voices from the War’ including Daljit Nagra and popular representations of Indians in the Second World War… →