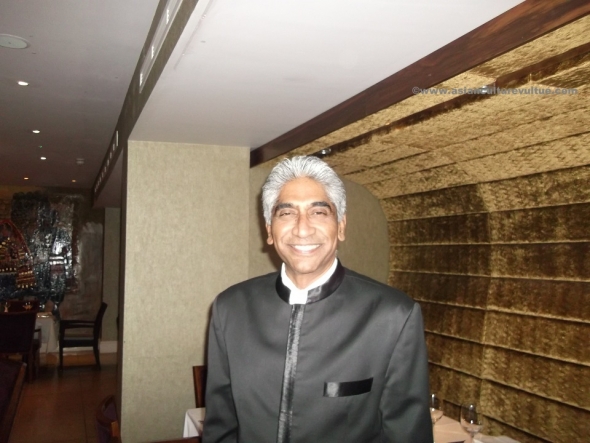 IN A NEAR 40-year career in Hollywood, producer Ashok Amitraj has seen it and done it and more – ‘finding’ kickass superstar Jean-Claude Van Damme, showcasing Clare Danes’ talent before TV sensation ‘Homeland’ and generating more than $1 billion in movie revenues.

The ex-tennis pro has just finished a film with an all-star cast called ‘Life of Crime’, which features Jennifer Aniston and Tim Robbins and is adapted from a novel by the recently deceased and much loved crime writing genius that was Elmore Leonard.

In London on Monday (October 28), Amitraj spoke to www.asianculturevulture.com about his life at the top of the Hollywood food chain, as a producer and CEO of Hyde Park Entertainment.

Probably the most powerful person of Indian origin in the entertainment business, he started out poor and hungry…for success, and as a consequence has some amazing stories to tell.

These are now contained in his memoir, ‘Advantage Hollywood’, which chart his development from Chennai to the Wimbledon Juniors tennis final and then establishing himself in LA.

Amitraj is a man of easy charm, gentle wit and has a natural storyteller’s disposition.

“The most interesting part (about writing a memoir) is that you forget, as you get successful, about the hardships that you have been through and as you start to recall it, more of it comes back, and it’s been a fascinating experience and  quite emotional.

“Looking back you connect the dots more. It’s been a great ride,” he told ACV.

He released the memoir in London in front of a high-powered audience of business tycoons, film industry stars and India’s high commissioner Virander Paul – all brought together by the Indian Journalists Association (IJA) that Monday to celebrate Amitraj’s achievements under the auspices of a Diwali dinner.

Amitraj somewhat repayed the compliment paying tribute to India, saying he still felt Indian and that everything he did still had something of an Indian stamp on it.

What should strike anyone is how he made his way in Hollywood and he sees parallels between his journey and his great friend Sidney Poitier’s own in breaking down barriers and getting to the top table.

Poitier became the first black actor to win an Academy Award in 1963, at a time when prejudice was still rife.

“It’s hard to say whom I was most impressed by,” answered Amitraj to the question. “ It’s a package – but Sidney Poitier stands out and not just because he is my friend.

“I knew him from my tennis days, nearly 40 years ago. He is a very impressive man – his career and his breakthroughs in breaking the mould.

“I feel that what he did in the 1960s, I did in the 1980s. I was an Indian tennis player trying to break through, who knew nothing. I just wanted to be in the film business, in Hollywood.”

There was no one moment or person who gave him that all important break.

“There is no such thing,” he told us. “You make your own breaks and if you bang on the door long enough, you can break it down. Breaks are just a fantasy. ‘Double Impact’ (with Jean-Claude Van Damme) was deemed an overnight success but the night lasted a long time – 10 years.”

Amitraj grew up in Chennai in a high-achieving tennis family but the way forward after tennis did not seem clear.

He had landed up in LA playing tennis very successfully in the World Team Tennis Championship, but he was desperate to get into the film business and had little real idea of how.

His only (dubious) credential was watching ‘The Sound of Music 34’ times, he revealed.

“For five or six years (from 1975) everyone knew me as a tennis player and I would play in these really bad tennis games with a lot of powerful executives, producers, directors and stars and they were really bad (at tennis) but that shows you just how badly I wanted to get into the business,” he told the audience at the IJA dinner. “For five or six years, they wanted me on their courts on Saturday morning to play tennis (with them) but didn’t really want to make a movie with me,” he opined.

He survived by making small films – many of which went straight to video at the time but then in 1984 something happened.

“I was sitting in my office and I got this 8×11 envelope from an actor and not really having anything to do, I saw the number and called him over.

“In 1990, I’d made a bunch of small movies and I was at the Cannes Film Festival sitting in the lobby of the Carlton Hotel and this kid comes running across the lobby and says, ‘Ashok, Ashok, of the 800 photographs I sent out, you were the only one who got back to me.

“I didn’t feel like telling him I had nothing better to do, he was so excited and he said ‘we’ve got to make a movie together’.  The kid’s English was a little better – his name was Jean-Claude Van Damme and we made a movie together called ‘Double Impact’ for $11 million and it grossed over $100m worldwide.

“He became a movie star and people in Hollywood started returning my calls.”

His love affair with film began in Chennai (Madras it was then) watching movies at the Sapphire Theatre there.

“It was not a 30-seater like you might have in today’s multiplex – it was a big theatre and it captured the magic of the movies and had a big influence on my life,” he explained to his audience.

He clearly loved going there and even seeing ‘The Sound of Music’ 34 times had a payoff of sorts.

“It’s funny how things come full circle – for many years I was on the board for foreign film at the Academy and sitting next to me was Robert Wise, before he passed away – the man who directed ‘The Sound of Music’.

He told us it was hard to put a finger on the film that has given him the most satisfaction.

“My movies are like our children, you spend so much time on each one and each ones gives you a different sense of satisfaction.”

He reeled off a short list, ‘Bandits’ (2001) with Bruce Willis and Cate Blanchett, and more recently ‘Ghostrider: Spirit of Vengeance’ (2011) with Nicolas Cage, as well as ‘Bringing Down The House Down’ (2003), with Queen Latifah and ‘Shopgirl’ (2005), also with  Martin – and Danes – as a wistful, attractive, lonesome shop girl, who has very contrasting romances with a much older tech millionaire and a goofy, sweet loser-type played by Jason Schwartzman.

Danes is terrific, carrying the movie on her slender shoulders, displaying that ennui of good-looking female shop assistants that is so recognisable in large, slightly elitist retail stores everywhere – go look, please.

Adapted from Martin’s own novel, it’s small but beautifully pitched and quietly directed by Anand Tucker, who has an Indian heritage.

Amitraj warmed to his theme.

“She’s always been a phenomenal actress but she hasn’t always had the success she deserved – talent is only one part of it, it’s about the material, luck and when and how it is distributed.”

“It was never meant to be a commercial film – it was very much  a festival movie and won a number of different awards,” Amitraj pointed out.

Another element that stands out is Amitraj’s ability to flit between this type of movie and quite another, amply demonstrated by his current offerings.

For ‘Life of Crime’ is a typical Leonard caper and comes with a top cast. It is expected to release in 2014

While in London he was also working on ‘Midnight Sun’ – directed friend and Tomorrow Never Dies Bond director Roger Spottiswoode – which is a family movie about ‘a boy and a polar bear’.

He isn’t a producer who thinks and sticks to genres.

“I think more about the story and to a great extent I will react to a script instinctively and it’s about what I want to make.”

He lists Bollywood A-listers such as Shah Rukh Khan, as his friends (Khan appears in a short video praising Amitraj, see link below) and Amitraj said the problems with Indian films is that the writers and the scripts they write aren’t given the attention (or credit) they should be.

“I don’t get pitched to by writers in India, and I hold them in the highest regard. The way you tell a story is the most important thing. Writers need to be paid more (in India) and given a lot more attention.

“There are great and original stories that come from the culture and traditions of India, which are more spectacular than anywhere else in the world.”

He said growing up in India has stayed with him and has helped him to negotiate the pitfalls Hollywood inevitably offers.

Eschewing a possible love marriage to any of his early American girlfriends, he married Chitra through the traditional way and now has two children. As a South Indian catholic, he said he has remained faithful to the values he inherited and paid tribute to his parents at the dinner.

“Growing up in India with the wonderful mix of religions – it influences everything that I do in my life and with the movies that I make. Integrally I am Indian.”