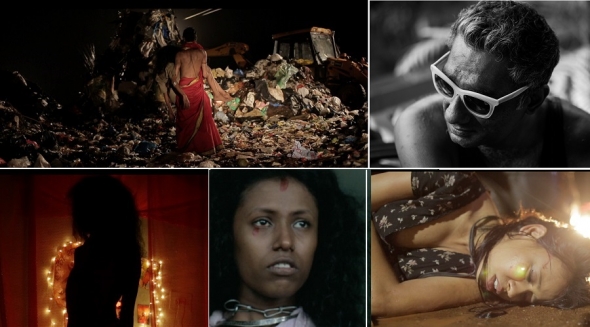 HIS FIRST film was banned in India but ‘Gandu’ (‘A**hole’) is something of a cult classic and earned him a worldwide reputation as a filmmaker with enormous edge and vigour.

Now, festivalgoers at the Berlinale (February 15-25) will get a chance to deliver their verdict on his latest production – ‘Garbage’. It is the only Indian film selected for the fest.

‘Garbage’ enjoys its world premiere today (February 21) at the Berlin International Film Festival and sees director Qaushiq Mukherjee – better known to the film world as Q – returning to the fest seven years after ‘Gandu’ premiered there. His last film was ‘Brahman Naman’ – an Indian sex comedy that found a home on Netflix.

His latest film will almost certainly shock and upset anyone who believes Bollywood represents the best of Indian filmmaking.

Q’s films are almost tirades against the system and are produced to make audiences squirm and feel uncomfortable.

Speaking to www.asianculturevulture.com ahead of today’s showing of ‘Garbage’, Q does not see himself as a traditonal filmmaker and is someone who understands his work as constant transgression.

“I don’t consider filmmaking to be my profession. I am more like a film jockey playing a set,” he told acv.

“I am sampling what is around me and I am making an atmosphere at a certain period in time and that atmosphere is there to make you uncomfortable – you should not be there sitting comfortably – this is meant to be an uncomfortable dance.”

Set in Goa, Phanishwar is a taxi driver who lives with Nanaam, whom he keeps in chains.

The two are in some form of a relationship (acv has not seen the film) and it has an S&M angle too – one of Q’s continuing themes is sexuality and transgression related to that; Phanishwar is also beholden to a local ‘baba’ (a religious cult figure) and there is a homosexual angle there.

“It is a kind of metaphor,” explained Q speaking from Berlin. “Rami, the city girl feels violated about something she chose to do and is aware of inconsistencies of the social fabric around her actions. She feels privileged enough to feel violated and that her life is coming to an end with this (tape).

“But the other two live in squalor and a habitual nightmare… it is two ends of the spectrum of society.”

Of course, it isn’t black and white – Q described it as being more “thick and thin” and with lots of shades in between really. The point is self-perception and how some groups almost willingly accept their own repression and degradation.

“The bandwidth of the marginalised is narrow and it affects every position they take and their lives are generally completely controlled by someone else,” Q extrapolated.

In many ways, the transgression and Q’s general oeuvre is to challenge and question norms – sometimes by shocking and being wilfully provocative. Some of the media who have seen ‘Garbage’ in Berlin, describe it as an act of resistance.

Like many countries, India is in something of a cultural and political firmament – the ruling Bharatiya Janata Party (BJP) under Prime Minister Narendra Modi are Hindu nationalists and strongly believe in tradition and orthodox Hindu practices.

Opposing them in some quarters is seen as an act of treachery or being ‘unpatriotic’ and the country has witnessed violence as groups clash over beliefs, religion and caste.

He said the spirit of ‘Gandu’ is very much in ‘Garbage’. He didn’t have a lot of money.

He was backed by director-producer Hansal Mehta, who made the acclaimed ‘Aligarh’ (a gentle film about a gay Indian academic who is hounded out of his post) and producer Shaailesh R Singh. Both gave him the freedom to make the film Q wanted.

“I had very little resources and I had to use whatever was around me,” Q explained.

The film has a certain documentary edge to it, with violent videos that were actually doing the rounds in India shown in the film as just that.

“You use things that you find around yourself. I think that has happened with this film – there are a lot of truths around that get reflected in bizarre ways in this narrative.

“It was mostly unplanned and we were searching in real time and that is what we would show.”

Q now lives in Goa, having moved from his native Kolkata.

“It’s extremely alive in terms of political standpoints, as much as Kolkata, if not more so right now,” he said of Goa. “It’s a place where a lot of right-wing organisations have their HQs and there’s a lot of political unrest currently and people are getting more organised about how to protest.”

It isn’t clear when ‘Garbage’ will come to the UK, or if it will come at all – but a festival is likely to pick it up you will know about it here!

A clip from Garbage
http://screenanarchy.com/2018/02/berlinale-2018-check-out-this-exclusive-clip-from-qs-garbage.html