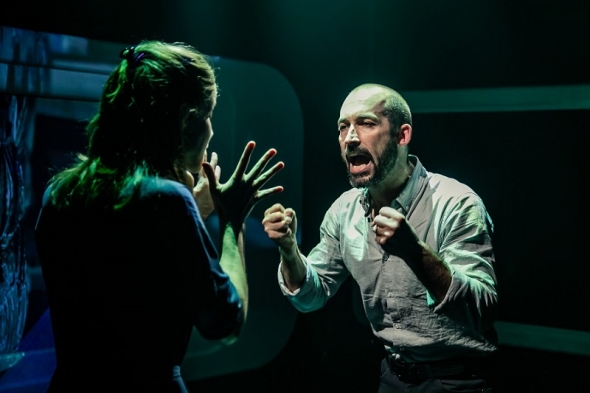 PARK THEATRE, in Finsbury Park, is one of those neighbourhood London venues that regularly puts on good work and the chalk illustrations of its productions on their foyer blackboard – done by the in-house chef and artist in residence, Robert Czibi are always unique.

The latest show in the studio is ‘Distance’, a play that was written because as author, Alex McSweeney explains in the programme sheet, “five people he knew killed themselves over five years. All of these people were men,” and he wanted to know what drove them to their decision.

In ‘Distance’ , directed by Simon Pittman, we met Steven (Adam Burton) a highly intelligent man on the way to a job interview – sitting in a train carriage preparing – while at the same time his mind is on his relationship with his wife Sonja (Lindsay Fraser) with whom he’s about to separate.

He’s clearly suffering from depression and stress and then he runs into a friend, Alan (Abdul Salis) who is also going to the same interview.

Both men have to make a presentation, and as they catch up, Alan begins to pick Steven’s brain about certain aspects of literary icons, such as the narrative technique of William Faulkner. Steven is very bright and highly functional, but is cracking up underneath, hitting the bottle and having an internal monologue all at the same time.

Part physical theatre, part narrative, the show design by Bethany Wells, has a wonderful three-dimensional element -where Steven can see his own reflection in the mirror (his interior and exterior self) which then doubles up as carriage windows that close in or move outwards according to the action. One moment he is squashed in a train carriage (when he’s feeling the pressure) or when he’s relaxed there is more room. The lighting design by Dan Saggars with its bluish black tones gives off a sense of coldness.

It’s visceral and uncomfortable viewing as you know this could happen to anybody.

Steven (Adam Burton) and Alan (Abdul Salis)
©The Other Richard

Steven has had a comfortable job, goes to posh restaurants, and has a high-achieving wife and a son who clearly adores him.

We never ever know the reasons for Steven’s break up but it is well known that men find it difficult to talk about personal issues.

He tries to get help from the well-meaning Jehovah’s Witness social worker (played by Dorene Blackstock) but really it’s only The Duke (Richard Corgan), character who’s a kindred spirit and minstrel all rolled into one that seems to impact on Steven.

The show has been nominated for three Offies (off West End theatre awards) for Best Supporting Male (Abdul Salis); Best Director and Best Set Design (I wonder why the lead actor didn’t get a nomination as it’s a hard job to pull off such a difficult performance without ever getting off the stage for the entire duration of the show!)

The Campaign Against Living Miserably (CALM) have revealed that suicide is the single biggest killer of men aged under 45 in the UK and that, in 2015, 75 per cent of all UK suicides were male.

‘Distance’ goes some way in explaining how easy it is for depression to get hold of you and drag you down.
ACV rating: **** (four out of five stars)

Privacy & Cookies: This site uses cookies. By continuing to use this website, you agree to their use.
To find out more, including how to control cookies, see here: Cookie Policy
← ‘Ghost Quartet’ (review): Spirits lose force as they take on too much, but production has charm and quality…
‘When the crows visit’ – playwright talks misogyny, power relations and morality as premiere hits London →