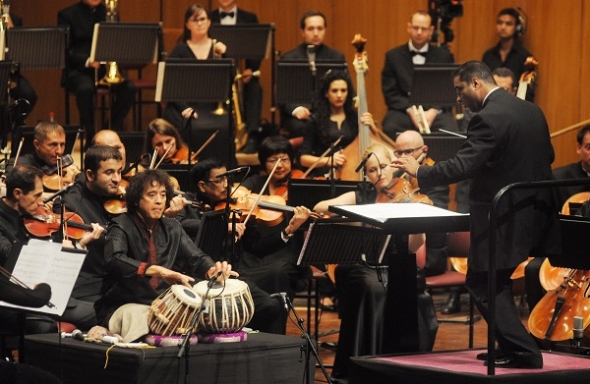 ZAKIR HUSSAIN – one of the world’s best-known tabla players – joins the Symphony Orchestra of India (SOI) for its first ever tour of the UK.

Hussain will play ‘Peshkar’, his concerto for tabla and orchestra and originally commissioned by the SOI in 2015.

While Hussain has played ‘Peshkar’ before in the UK – at Alchemy, the South Bank Centre’s annual South Asian multi-arts festival, it was with a BBC orchestra.

Tomorrow (February 19) at the Symphony Hall in Birmingham, you will be able to hear the SOI and Hussain play for the first ever time in Britain.

The SOI is on six-concert tour of Britain from Tuesday to the following Monday (February 25) only – and will play London, Cardiff, Guildford, Edinburgh and return to London for its final outing.

Hussain plays with the orchestra on just two of the opening dates – tomrrow in Birmingham and the next day at the Cadogan Hall in London.

Both the SOI’s UK debut performance in Birmingham and the one on Wednesday will be conducted by Zane Dalal, associate music director of SOI and its resident conductor.

He talked to www.asianculturevulture.com last week, as the orchestra and Hussain were rehearsing for the Mumbai concert at the National Centre for Performing Arts, their permanent home.

Dalal told acv about Hussain’s composition and what people could expect of him playing alongside a western-style orchestra.

“It starts as a solo with an impressionistic opening – there is a build-up of rhythm and the excitement – it’s like a juggernaut going right to the end.

“We (the orchestra) are made to support him, be a bed, be combative. It’s been a marvellous experience. By the time we get to the Cadogan, it will be nine performances of ‘Peshkar’ with eight for me as the conductor.”

The SOI and Hussain premiered ‘Peshkar’ in Switzerland in 2016 and have played in continental Europe before and the US.

It received rave reviews and is seen as a powerful expression of North Indian classical music with elements of western solo concerto.

“It’s more a symphony (a large-scale work than), than concerto (which is a solo backed by an orchestra or strings), with a fascinating dialogue between the soloist and orchestra based on the five-part structure of the ‘Peshkar’ or presentation form of tabla composition. I believe that combination works well for connoisseurs of Indian classical music and of western orchestral music,” Dalal is quoted as saying in a press release about the tour.

Talking to acv more recently, Dalal added: “This is our first tour of the UK and I hope it won’t be our last.”

There are only about a dozen Indian players that make up the SOI presently, but an academy has been founded and will provide a pipeline of future home-grown talent.

The SOI was co-founded in 2006 by Khushroo N Suntook, the chairman of the National Centre for Performing Arts (NCPA) in Mumbai.

Suntook had attended a concert by the West Kazakhstan Philharmonic Orchestra in 2004 in London and invited the recently formed orchestra then and its conductor Marat Bisengaliev to perform at the NCPA in Mumbai.

That visit and subsequent ones prompted Suntook to put the idea to Bisengaliev of forming an Indian and India-based orchestra.

Many of the SOI today hail from Kazakhstan and other former Soviet Union states.

Bisengaliev, who is now the SOI’s musical director, believes this process of mixing players from other nations and Indians is paying dividends.

“It is a young orchestra with a mix of styles and nationalities which gives it a special energy.

“I value the uncompromising approach towards the quality of the music making for the orchestra from our chairman as well as our long term-strategy to induct Indian musicians into the orchestra at a high standard, based solely on their professional merits,” he said.

British-born Dalal joined the SOI not long into its creation.

An organist and pianist by way of musical background, he graduated from Oxford University with a degree in music and led the Oriel Chapel College Choir there with much distinction. After leaving Oxford, his masters took him to Indiana University at Bloomington and a career in orchestral conducting. His parents had relocated to the US and he regards himself now as a Los Angelino – dividing his time between LA and Mumbai.

The SOI calendar is split into two seasons in a year – and many of its members have to be flown in from around the world, as the SOI continues to build its home-grown strength.

Dalal described it as something of a “United Nations” still.

“We have come a very long way in a short space of time and it’s on a very steep trajectory.“We have made sure standards are high and we invite people to a new sound to India.

“It is a great honour to introduce this marvellous piece to British audiences with Zakirbhai and the SOI,” said Dalal.

He does not conduct all the concerts – Martyn Brabbins, the music director of the English National Opera, conducts in Cardiff, Edinburgh and the SOI’s return to the capital next Monday; Bisengaliev plays the violin in the concerts without Hussain.