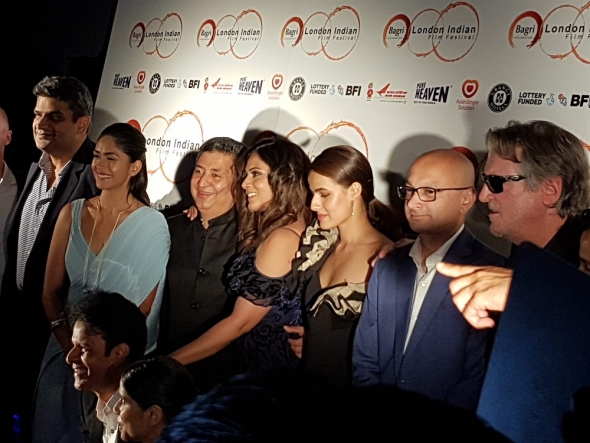 MANY of the India-based stars of the film ‘Love Sonia’ glittered on the red carpet at the opening gala film of the London Indian Film Festival last night (June 21).
The nine-day fest started with a world premiere of the film that features LA-based stars Freida Pinto and Demi Moore (in a small cameo).
Of the Indian stars it was great to see Rajkummar Rao, Manoj Bajpayee and Richa Chada (seen our pre-fest Twitter interview – it is here).
Also attracting a lot of attention was Mrunal Thakur, the Sonia of the film and set to have a great career in front of her.
The young beauty is the central character of the film and carries it superbly on her slender but very capable shoulders.
UK based Banita Sandhu (who talked to us for ‘October’ alongside Bollywood heartthrob Varun Dhawan) also walked the red carpet as a guest – she is next doing a film alongside Sally Hawkins, she told reporters.
Here are some pictures from last night and a video of Bajpayee quite rightly pointing attention to the issue of human sex trafficking and how we must put a stop to it.

Review
IF YOU don’t know anything about the international sex trade – this film, ‘Love Sonia’ is a tremendous wake-up call.
Many people were moved to tears by Sonia’s plight.
Freida Pinto as one of two brothel madams is very believable and so too is Richa Chadha whose character plays a pivotal role in allowing Sonia (Thakur) the ability to see an escape route.
That this is the fate of some 500,000 young girls in India is truly worrying and shocking. We all know it goes on – where a girl (often seen as a burden in opposition to a boy) is sold off or flung out with few options.
Anupam Kher, as the landlord boss who exploits Sonia’s farmer father (Adil Hussain), is brilliantly menacing – so too is Bajypayee as the ruthless and tender (on ocassions) brothel owner Faisal.
Director Tabrez Noorani – making the transition from producer, ‘Slumdog Millionaire’, and ‘Life of Pi’ – keeps the film moving briskly for the most part and delivers an absorbing, engaged film with fine set design and believable characters.
ACV rating: *** (out of five)

Privacy & Cookies: This site uses cookies. By continuing to use this website, you agree to their use.
To find out more, including how to control cookies, see here: Cookie Policy
← Boney Kapoor and Janhvi Kapoor emotional tribute to Sridevi at International Film Festival of India (IFFI 49)
Top Bollywood producer says successful films no longer have to showcase stars – but not the same outside India (Film Bazaar) →