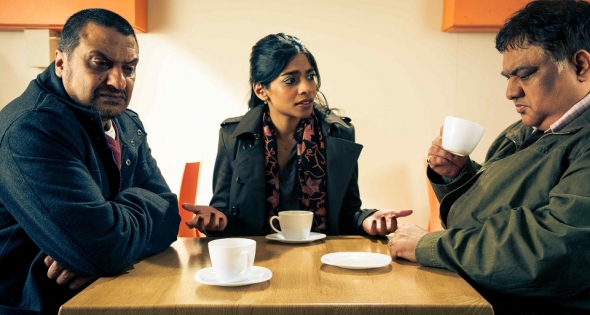 Film about food, family and Leicester to hit UK screens…

Of course, the proof is always in the eating – and this production has food at the very centre of it.

Amit Gupta’s second feature, ‘Jadoo’, is a comedy drama set in Leicester and about two brothers who both run restaurants, having long fallen out.

However, daughter Shalini (Amara Karan) wants to reconcile these two other men in her life – brothers Raja (Harish Patel) and Jagi (Kulvinder Ghir), as she sets out to organise her wedding to Mark.

Gupta grew up in Leicester and has very personal reminiscences about his family running an eaterie, ‘The Chaat House Restaurant’, along the Belgrave Road, undoubtedly the city’s most famous ethnic street, and also known colloquially as The Golden Mile or The Curry Mile.

His first feature ‘Resistance’ (2011), was critically acclaimed and starred Michael Sheen and Andrea Risborough, and his time away from the town (he now lives in Oxfordshire, having spent 15 years in London), has helped him to step back and distil ideas about the town and its Asian contribution.

‘Jadoo’ has been described as his love letter to Leicester and appropriately enough there is a premiere on Tuesday evening (September 3) in the town and it hits more cinemas up and down the land on Friday (September 6).

“It is a personal film,” Gupta, 40, reflected to www.asianculturevulture.com. “Sometimes you have to go away from a place to really see it completely.

“People around the country will see an area that has its own definable character and will feel it is very British and very Indian and a place they want to go to.”

Much of  ‘Jadoo’ takes place in the area of Belgrave and it was both an inspiration and a form of meditation for the writer-director, who won a Royal Court Theatre writing competition with ‘Touch’ in 1998 and has written successful plays.

“It’s very much rooted in my background and being away from a place brings its own clarity…I don’t know where the pot (of creativity) is, but you just go back to it and it is tied up with my childhood memories – that’s why it has a nostalgic feel. I grew up in Belgrave with Bollywood cinema.”

His father was an aspiring thespian, but once the family involved itself in the restaurant trade his personal passion became the VCR and watching Bollywood movies.

It was by the side of his father and his other siblings, that Gupta began to dream of making films.

“I am still a massive fan of Indian cinema – Bollywood. I don’t use the term disparagingly, it was a huge influence as a child and all I watched.”

That sense of identity, close kinship and his mother’s meals during their Bollywood viewing has all found its way into this comedy drama.

‘Jadoo’ has enjoyed wide success on the festival circuit and while it is very clearly a British film, others respond to it naturally and a little unexpectedly, revealed Gupta.

It premiered at the Berlin Film Festival and was very warmly received there in February.

“It was a surprise – we were going to release the film in March, but then it did well at the festival and we were given advice.

“It’s a story of family and something different – a different view of a British Asian family – one that is normal, where there isn’t a violent father (‘East is East’) or a major issue about a mixed race relationship (‘Ae Fond Kiss’).

“It’s just a normal British Asian family and not some stereotype. It feels very real to them (foreign audiences) and it’s like a side of Britain they have never seen before.”

For him the story of an Asian family split apart resonated with others easily.

“It was very pitcheable and I think people connected with it very quickly. It’s the story of a family who have a break and the break is represented by a family rift, and the family are torn in half. It’s a very visual idea and something with which people could connect.”

The core of the film is the relationship between the bickering brothers, as played by veterans Patel and Ghir.

“The tricky part of the casting was getting the brothers right, and anyone who watches Harish and Kulvinder together will really feel there is a real relationship there – I was very pleased about that.”

Both can be exceptional performers and are capable of bringing richness and depth to the characters they inhabit and if the film succeeds (commercially) you can bet this will be a definite attraction.

Gupta said ‘Jadoo’ has already been categorised as a ‘Bollywood’ movie and that has both positives and negatives.

‘Slumdog Millionaire’, one of the most successful movies ever, was categorised as a ‘Bollywood’ movie and in the beginning people were very suspicious and sniffy about it.

“Nobody thought there would be a market for it – all it tells us, is that nobody really knows anything,” said Gupta, only half-jokingly.

He said selling the film to producers after making ‘Resistance’ was not as hard as it might have been had he started out with ‘Jadoo’ (and it helped him not to be categorised as just a director who makes British Asian films).

“It’s like a lot of people have different interests, and directors are like actors, they can get typecast very quickly and had I made ‘Jadoo’ first I am sure people would have put me in a particular category.

“Making the first one was very hard,” he added. “People are taking a shot in the dark and ‘Resistance’ was a period movie with special effects and has children and animals in it – all the things you’re told not to work with as a first time director.

“They (the producers) took a risk on that and it seemed to go pretty well. I guess I didn’t have to prove that I could pull a film together.”

Making films is a fraught business at the best of times (and in these, it’s perhaps as tough as it has ever been), but how does the industry respond to material of this type generally?

“I suspect what will happen is that if ‘Jadoo’ makes a lot of money it will be a bit easier for British Asian filmmakers, if it doesn’t, some will say there isn’t an appetite for it. That’s the problem when you are categorised.”

The last British ‘Bollywood’ movie with a similarly well-established British Asian cast (including Patel) was decent and very watchable,  but it failed to set the box off alight (in the way of ‘East is East’, still to date the one of the most successful independent productions ever made in Britain.)  On average an independent British feature will cost between £1m-£3m to make and that money can be hard to recover, as it is for any indie production.

Seemingly, you can have all the right ingredients – Ayub Khan Din wrote both ‘East is East’ and ‘All in Good Time’, and the acting was solid and the director Nigel Cole, who was behind ‘Made in Dagenham’, all brought their ability to a worthy production – but for that chai to go down well, people really have to be thirsty for such fare and respond to it with their feet.

*’Jadoo’ on release at selected cinemas from September 6