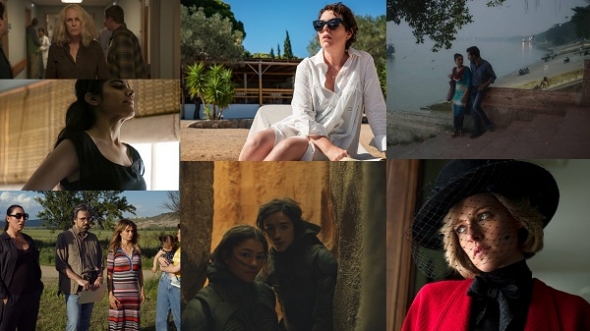 By Tatiana Rosenstein and Rodrigues C

FOLLOWING the Cannes Film Festival, which ended in mid-July, there was a clear surge of optimism. Despite the pandemic, cinema is alive!

However, due to the shift in dates for Cannes, which usually takes place in May, the festivals this summer and autumn, which are generally considered not to be so intense, proved to be more hectic.

There was Locarno Film Festival, which began almost immediately after Cannes, and now we have the 78th edition of the Venice International Film Festival – which is the oldest film festival anywhere.

It all begins tomorrow (Wednesday) and opens with ‘Parallel Mothers’ by Pedro Almodovar.

The Spaniard showed amazing creativity during the quarantine period. Having recovered from a coronavirus infection himself, at the last Venice Film Festival, he presented a short film ‘The Human Voice’ with Tilda Swinton in the title role. A tour de force, it showed Swinton pining for an ex-lover.

For his new release, he managed to make a full-length film with Penelope Cruz, where she plays a middle-aged woman, getting accidentally pregnant by a man who doesn’t want to become a father.

The long-awaited film ‘Dune’ by French Canadian Denis Villeneuve with Timothée Chalamet, Zendaya, Rebecca Ferguson, Jason Momoa, Oscar Isaac, Charlotte Rampling, Stellan Skarsgard, will be shown out of the competition. The film was originally scheduled for a December 2020 release, before being postponed due to the coronavirus pandemic. This latest adaptation of Frank Herbert’s sci-fi epic is set far into the future, in an intergalactic society, where powerful houses fight for control over resources and planetary power. The book, published in 1965, was considered ground-breaking because of its unique portrayal of the future, which then raised issues of environmental protection and gender dynamics.

Also, out of competition is ‘The Last Duel’ by Sir Ridley Scott with Matt Damon, Ben Affleck and Adam Driver.

David Gordon Green has directed another postmodern version of the horror franchise ‘Halloween Kills’ with Jamie Lee Curtis; and British Edgar Wright has made his second film in a year.

After the much lauded documentary about the US-British pop group, Sparks, he will present a horror-mystery-drama in ‘Last Night in Soho’ with Anya Taylor-Joy in the lead. In this 1960s period piece, an aspiring fashion designer travels back in time and is forced to confront more than just the past.

In the competition category, among the films vying for the much coveted, Golden Lion, the festival’s top award, will be ‘The Power of the dog’ by New Zealander Jane Campion. The director has an impeccable pedigree as the first women director to ever win the Palme d’Or with ‘The Piano’ (1993) and this year French director Julia Ducournau became only the second with ‘Titane’.

‘The Power of the dog’ has an all star cast – Elisabeth Moss, Benedict Cumberbatch and Kirsten Dunst may all be snapped at the famous Venice Lido, where screenings take place.

Hollywood Renaissance figure Paul Schrader, screens ‘Card Counter’ at the festival. The writer-director-critic best known for his work with Martin Scorsese (‘Taxi Driver’ and ‘Raging Bull’, just two among them) also has a starry line-up – Oscar Isaac, Willem Dafoe and Tye Sheridan. It chronicles the life of a gambler ex-soldier haunted by the past.

Recent Cannes jury member Maggie Gyllenhaal comes to Venice with her feature film debut as director with the ‘The Lost Daughter’, starring Oscar-winner Olivia Colman and Ed Harris. A college professor is forced to look back on her life while on holiday in Italy.

There will also be much British interest around Chilean director Pablo Larrain’s ‘Spencer’ not least because it has an American in Kristen Stewart in the lead role as the late Princes Diana, whose maiden surname was Spencer.

There is little doubt that both critics and a primed public are eagerly anticipating ‘The Hand of God’ by Oscar-winning Italian director (‘The Great Beauty’ 2013), Paolo Sorrentino. Produced by Netflix, ‘The Hand of God’ stars Sorrentino favourite Toni Servillo and is a deeply personal film. The title refers to the infamous hand of god goal by Diego Maradona in the World Cup quarter-final game against England in Mexico in 1986. Sorrentino says he wanted to watch the game and fortuitously did not travel with his parents to their mountainside resort home. They died in what was a central heating malfunction. His previous film ‘Youth’ (2015) contains a reference to the same.

Michel Franco brings ‘Sundown’ after the festival circuit success of ‘New Order’, which showed a fractured Mexican society imploding. Tim Roth and Charlotte Gainsbourg star in a film which is about a wealthy man abandoning his family while on holiday.

Elsewhere, beyond the star directors and their Hollywood names, there is much interest also in ‘Mona Lisa and the Blood Moon’ by American-Iranian Ana Lily Amirpour with Kate Hudson and Korean actress Jung Jong-seo, known for the thriller ‘Burning’ essaying roles.

Venezuelan Golden Lion laureate Lorenzo Vigas brings ‘Box’; while there is the ‘The Hole’ by Italian experimental filmmaker Michelangelo Frammartino.

The winner of the Golden Lion will be announced on September 11 by the jury chairman Korean film director Bong Joon Ho, a much decorated figures since ‘Parasite’ premiered in Cannes in 2019 and took the top prize there.

A total of 4,000 spectators will be admitted to this year’s festival. Control procedures will remain the same as last year, which means tickets must be booked online and in advance.

But the green pass will be a new requirement. Only visitors with health certificates confirming that they are vaccinated against covid-19 or have no infection, are allowed to attend the film festival.

Aditya Vikram Sengupta’s statement about ‘Once Upon a Time in Calcutta’: This film is a culmination of personal feelings and emotions for the city of Calcutta and its people, especially as it tries to catch up to the rapidly changing world. Leveraging real characters and actual events, the film is my effort to chip away the various layers of the previously communist city to reveal a human condition that is tragic and yet full of hope and joy. The film highlights the aspirations and struggles of people gasping for breath in an ever-expanding metropolis. For the viewer, I have tried to create a real glimpse into the murky waters of Calcutta, with colourful characters, all trying very hard to find a corner of their own without drowning.

ALSO in the parallel short film Orrizzonti section is ‘Mulaqat’ (‘Sandstorm’) by Seemab Gul. Filmed entirely in Karachi during the covid-19 crisis, it chronicles the life of a schoolgirl from Karachi called Zara, who shares a sensual dance video with her virtual boyfriend.
Seemab Gul’s statement: This coming-of-age story navigates the tricky terrain of internet dating in a conservative Muslim society. The film questions the objectification of the female body and its relationship to honour in Pakistani culture. Focusing on female agency, this personal and political film dramatises the desire to gain freedom from harsh societal constraints.

On Saturday (September 4), there will be an international panel on Afghanistan and the situation of Afghan filmmakers and artists – see more details https://www.labiennale.org/en/news/international-panel-afghanistan-and-situation-afghan-filmmakers-and-artists