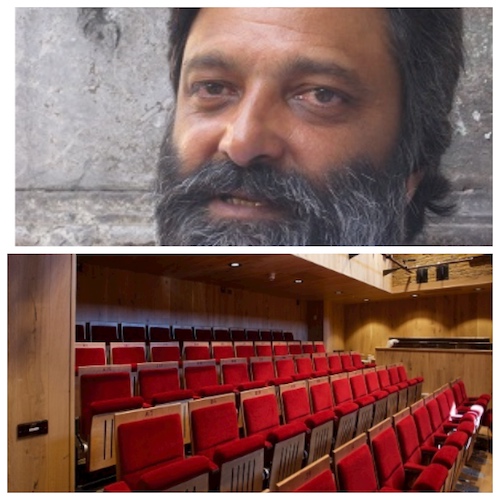 THAT Jatinder Verma, artistic director at Tara Arts, will be stepping down at the end of the year has come as a bit of a bolt from the blue, even though you think it makes logical sense after 43 years at the helm of a theatre company, it may seem quite natural to want to move on.

Many other theatre founders within the British Asian theatrical landscape have done just that – such as Sudha Bhuchar and Kristine Landon-Smith founders of Tamasha Theatre Company and Rukhsana Ahmad and Rita Wolf who co-founded Kali Theatre.

www.asianculturevulture.com will be talking to Verma in more depth about his work in theatre, his achievements and future legacy in due course, but this is a personal reflection.

There is something difficult to imagine about Verma putting his feet up as Tara Arts, since its inception was more than a theatre company and was driven by Verma’s passion and eloquence. It was a provocation that stated, “I am in your face and will tell my story! ignore me if you dare…”

After all, Tara was set up as a direct result of a racist event – the unprovoked murder of a young Sikh boy, Gurdip Singh Chaggar in 1976.

Its first play, ‘Sacrifice’ by Rabindranath Tagore had an anti-war message and was staged at the Battersea Arts Centre (now, BAC) in 1977.

The company’s early plays were about activism and were followed by discussions and some could have been described as agit prop.

I, along with many others such as actor, Shaheen Khan, the now late, Paul Bhattacharjee, Sudha Bhuchar, would not have got into theatre, if it were not for Verma.

We appeared in many of the early works and this ignited an interest in pursuing theatre as a vehicle for “telling our stories” which we continue to this day. I saw some sketches this nascent company did at a Diwali function in Wandsworth Town Hall and thought I want to be part of that and thus my own journey began.

The company used to meet at a community centre in Tooting Bec, and I became part of it, acting in some of the early plays dealing with subject such as the Jallianwalla Bagh massacre, Asian life in England, racism, Indian epics – and it fostered a sense of community and creativity that has stayed with me to this day.

It also led to a flowering of the second generation Asian voices and facilitated several performers to become professional actors, contributing to the wider theatrical landscape.

Verma was inspirational in helping us find our individual voices and developing a style of performance as distinct from a western theatre form.

He introduced us to the Sanskrit classics and when I joined, even taught us our history classes so we could learn about our own shared colonial histories – a cry which has become louder over time.

He has this ability to inspire other artists as even writer Vinay Patel has acknowledged that – it is through Tara and Verma we trace a line through Britain’s South Asian theatre history – which I have been striving to document and continue to do so.

Verma was the first person of colour to have a show at the National Theatre in 1990 staging his own adaptation of Moliere’s ‘Tartuffe’.

This was followed by the first-ever staging at the National of the Sanskrit classic ‘The Little Clay Cart’ (November 1991- 1992).

Acv will bring you an in-depth interview with the man whose work has contributed to changing the landscape of theatre in the UK for the better, but for now I salute him and would encourage him to write a memoir…and contribute to a much needed British Asian theatre history story!

Varma’s departure from Tara Arts was announced in the media on November 19 – he said it was time to move on and that he could continue to make cultural connections through his work and serve the cause of diversity.