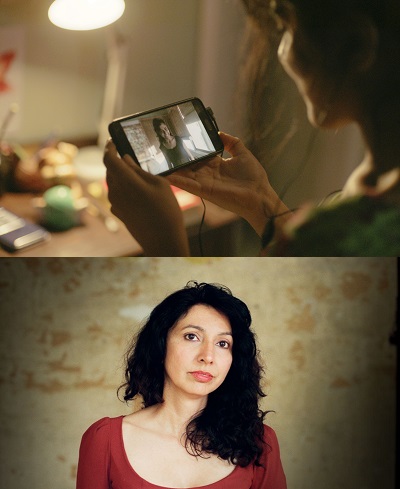 SHOT with poise, elegant in its framing, and well-acted, it’s not difficult to see why ‘Mulaqat’ (translated as ‘Sandstorm’) caught the eye of the programmers for the Venice International Film Festival.

This short film – of 20 minutes – from Pakistan enjoyed its world premiere there in the latter part of the festival, which officially closed yesterday (September 11), and writer-director Seemab Gul, based between London and Karachi, is a talent to watch.

She believes she is quite possibly, the first woman director from Pakistan to have screened a short at the festival, certainly in recent times.

‘Mulaqat’ tells the tale of a young woman/girl (16) who through her mobile phone sends her online ‘boyfriend’ a video of her dancing.

“It’s not exactly a threat,” explained Gul to www.asianculturevulture.com just before touching down in Venice for its world premiere on Thursday evening (September 9) “It’s more like a cousin or a brother asking and being concerned (about how some people might view such a dance).

“It’s a very delicate balance between coercion and outright blackmail.”

He pushes for them to meet – in between we see Zara’s (Parizae Fatima) life and home: still at school, precocious, independent in thought and curious; and with a loving and materially comfortable family and a father who isn’t overly worried by his daughter having a mobile phone.

The film goes right to the heart of a constant and universal dilemma – how much of yourself should you reveal online?

In conservative or more overtly patriarchal societies, as much of South Asia is, at one level – what are the boundaries between young men and women online? In such countries where social opportunities to meet potential partners may be highly restricted – the internet is a useful arena of exchange and exposure.

Gul interrogates this with intelligence and sensitivity. She also doesn’t blatantly take sides and has sympathy for her male protagonist.

“The inspiration for the story came from multiple sources – my sisters who grew up in Karachi, and I researched a lot about online relationships and blackmail online.”

Gul is interested in the cultural boundaries that seemingly govern this space.

“I wanted to cover a part of Pakistan that is very modern, cosmopolitan and where the East meets the West, and I did want to explore female desire in Muslim culture. I didn’t come across it very much when I was growing up – one of the key challenges, is how far can you go and how much freedom do you have in strict Muslim cultures?”

In some circles, in South Asia – and this can cut across religious lines – certain forms of dancing, by young women, especially westernised and deemed as ‘sexy’ , are shameful and unacceptable and liable to social opprobrium and even punishment for flouting social decency.

“I wanted the dance to be ambiguous,” Gul revealed. “Societies can look modern on the surface. A friend of mine read the script, and said: ‘what’s the big deal – it’s only a dance’.

“In some parts of Pakistan, amongst an educated, westernised elite, it’s ok, but I would say for the majority of families it would not be acceptable.”

A mobile phone in the hands of teenagers is an invitation to explore, surely, one might counter.

“‘Mulaqat’ is asking what happens when this new freedom is applied to old values and conservative cultures – I wanted to explore that clash,” posed Gul.

She hopes to take ‘Mulaqat’ to other film festivals and open up a debate among young people themselves.

“I would love for it to be educational and get young to people to talk about boundaries. It should spark an important dialogue.”

There’s a very assured central performance from Parizae Fatima who plays Zara. She has been in theatre productions and has done some television work but this is another level and it is a shame she couldn’t be in Venice because of current covid quarantine restrictions.

“We hope to get her to a North American premiere,” said Gul. “She was 16 when we shot this and she’s incredible. She was very hungry and committed.”

Gul herself grew in Surbiton, in South London, after coming to the UK with her family as a teenager. She has a degree in Fine Art from the Surrey Institute of Art & Design and was a political activist before enrolling at London Film School and honing her craft.

Her first widely broadcast work, ‘Zahida: Pakistan’s first taxi driver’ a 30-minute documentary, screened on Al-Jazeera English a couple of years back, is available on the popular Journeyman Pictures Youtube Channel. It’s been seen by millions in several screenings on the Qatari-based news channel.

For this film, she was initially backed by art dealer turned film producer, Abid Aziz Merchant, whose Sanat Initiative is a well-established art platform now branching out.

The latter stages of funding were provided by Jemima Khan, once married to Pakistan’s present leader and former cricketer, Imran Khan and part of the wealthy Goldsmith family. Gul said she had initially pitched a documentary idea to Khan some time back and returned more successfully when she wanted to get this film over the line.