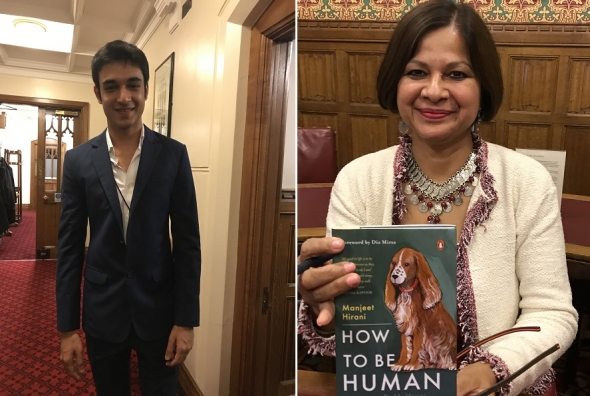 Bollywood royalty (of a sort), airline pilot, mother and wife, and opposed to dog ownership, Manjeet Hirani found herself relenting and writing a blog that has now become a book about how humans have something to learn from their canine pals…

DOGS are an increasingly popular feature of British Asian life – especially as you tend to move up the social ladder.

It’s always been the case in India (more or less) – you will see many domestics walking their owner’s dogs around the big cities.

They are seen in some circles as a status symbol and have many fans – but you could safely say that Manjeet Hirani (pictured above right) – wife of Bollywood star director Rajkumar – was not one of them, until she started to look after a dog herself.

She came to the House of Lords, during London Book Week late last month, to launch ‘How To Be Human – Life Lessons by Buddy Hirani’.

The handbag sized hardback (just 120 pages) has been adapted from debut author Manjeet’s blog, which she started to record her experiences of being a first-time dog owner.

Her writing was picked up by Penguin India and the book has been endorsed by numerous Bollywood stars including Ranbir Kapoor, Amir Khan and John Abraham.

But why are the film fraternity so interested in a book about dogs?

Buddy, the pooch in question is an ex-film star who has been adopted by a filmi family.

Cast in Director Rajkumar Hirani’s hit film ‘PK’, starring Amir Khan and Anuskha Sharma, after shooting finishes Rajkumar couldn’t bare to let the dog go, so he brought it home and gifted it to his wife Manjeet and their teenage son Vir (now a man and pictured left).

Without any time to adjust to the idea, Manjeet’s life turned upside down as she welcomed a new member into the family.

ACV caught up with Manjeet at the launch where she shared some of her favourite anecdotes of being a newbie dog owner.

Starting with the shock of finding out Buddy was moving in, she said: “I was very scared of dogs. Vir always wanted one but because of my fear he was never allowed. At the age of 14 he had given up and all of a sudden, we had one. Buddy had played the depressed dog in ‘PK’ who wanted to commit suicide so I couldn’t turn him away.”

One of the most important tasks a dog owner needs to do is exercise their canine companion by taking it for walks. But coming to terms with walking her dog is what prompted Manjeet to start her blog.

The experience of taking Buddy out for the first time reduced her to tears. It was so different to anything she’d ever experienced so she decided to write about it.

She recalled: “I was clueless. As soon as we left Buddy and I got surrounded by stray dogs, I was so scared. They chased us and barked at us and I didn’t know what to do, so I cried.”

Six months into owning Buddy, Manjeet tried her hand at breeding by pairing Buddy up with a female dog.

In a similar fashion to finding a wife through the sharing ‘bio data’ as is commonly done in India, Manjeet tried to find the perfect match.
Sadly, it didn’t go to plan as Manjeet explained: “He got rejected because of his colour. I was told by one owner ‘my dog is golden and yours is very brown’, I felt as though I had failed as a mother, it did however inform another post!”

Manjeet created 10 blog posts and then one day while at an airport bookshop (she’s also a pilot for Air India), she realised she was sitting on a story she could share with many, many others.

She phoned up Penguin India who immediately liked her pitch but asked her for another 10 chapters so she got to work, describing her observations of how human behaviour could benefit from observing animals; in particular pet dogs.

The writing too came naturally to Manjeet: “It was beautiful – I combined my experience with my imagination but it was more like writing about the link there is between humans and nature than just my personal blog.”

Each chapter has colourful illustrations and it’s a light, fun read read though be warned, it will make you want to have your own puppy.

The book is not her last, she’s already written her next: “My second book is about my aviation life as a female pilot and how aviation too is just like life, from birth to death. It’s about the connections I’ve made with people and how similar that is to flying, taking off, the journey, cruising and landing; just as we do in life.”

Info (India):
‘How to be Human – Life Lessons by Buddy Hirani’ by Manjeet Hirani is out now by Penguin India.
http://penguin.co.in/book/uncategorized/how-to-be-human-life-lessons-from-buddy-hirani/
http://www.amazon.co.uk/How-Human-lessons-Buddy-Hirani/dp/067008915X

How to be human life lessons by Buddy HiraniManjeet HiraniVir Hirani