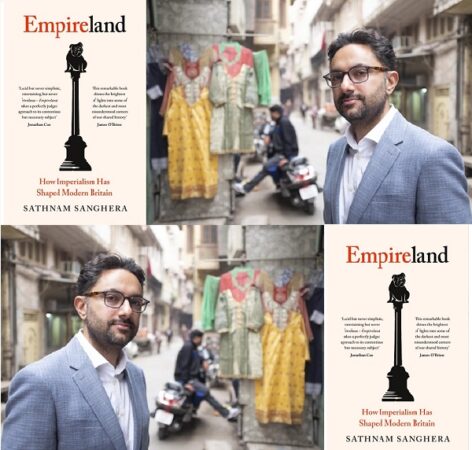 IN HIS latest non-fiction book author and Times journalist Sathnam Sanghera gives an honest account of his own personal ‘miseducation’ and discloses his sheer embarrassment on what he did not know about The British Empire.

Yesterday (April 13) marked exactly 102 years since the inexplicable and brutal mass shooting of innocent Indian civilians, Sikhs as well as Muslims and Hindus in Amritsar and this makes his work even more relevant and deeply poignant. It was what led Sanghera to write ‘Empireland: How Imperialism has shaped Modern Britain‘.

The book starts with Sanghera’s hypothetical suggestion of reviving and acknowledging ‘Empire Day’ as really existed between 1902 and 1956 before it became rebranded to become Commonwealth Day, which is still marked in some parts of former British colonies on May 24.

Sanghera in ‘Empireland’ suggests how a new version of Empire Day 2.0 would really hold up a mirror reflecting the impact and legacy of Empire in our everyday lives from Heinz’s canned Mulligatawny soup to the origins of the traditional Sunday roast being linked to the colonies.

In the second chapter ‘Imperialism and Me’, Sanghera shares insight into his diasporic upbringing; his Punjabi Sikh heritage and uses his own story as he muddles familiar sounding Punjabi words in a local shop, whilst on a trip to India to make a TV documentary.

It was this programme that became his starting point for his latest book.

He states: “I should confess that at this point of my journey into the story of British empire my history is poor.”

This begins his both personal and professional quest into his heritage, the position of Sikhs during Empire and the dark history of the massacre at Amritsar, the holy city of the Sikh religion.

“But to my shame, I know barely anything about it (the Jallianwala Bagh massacre) before coming here, what little knowledge I have deriving from the pivotal scene in Richard Attenborogh’s ‘Gandhi’ (1982).”

He learns how the crowd at Jallianwala Bagh on April 13, 1919 had gathered peacefully to protest – against British Colonial rule and the arrest of figures associated with Independence – close to The Golden Temple, the most sacred site in Sikhism.

The British were scared of a revolt and had banned gatherings, and when the unarmed crowd swelled, the order was given to fire on men, women and children indiscriminately – around a thousand are estimated to have perished according to Indian estimates and many more were injured.

The massacre is one of the key events of the 20th century, arguably marking the moment the Raj lost its grip on the largest empire in human history.

Ordinary civilians were slaughtered and Brigadier-General Reginald Dyer who ordered the shootings was later exonerated by the House of Lords and even financially supported by the likes of Rudyard Kipling.

Sanghera rounds on this shameful and pivotal moment to open his vital new work and begins to survey its wider impact and where it sits in the history of the British Empire. He also looks at how Jallianwala Bagh has shaped British-Sikh relations.

Sanghera’s work goes beyond being a zeitgeist publication that captures our particular interest at this time.

It goes deeper and is part of a narrative that seeks to record history in a global and mature context, exposing deeply ingrained institutional racial prejudice.

It is an in-depth and accessible non-fiction work on how modern Britain has been shaped by its past, clearly debunking myths of what we have been told about how the Empire came to be and how this imperial past is inextricably intertwined and has shaped the daily activities of many today, despite the sun having long set over what was the British Empire.

It goes without saying but this is a book that will be with us for a long time and moves debates about education, decolonisation (opening study up to more than just the conventional British or Anglo-American or European canon) and the teaching of Empire in a direction that should be seen as healthy and positive.

‘Empireland’, by Sathnam Sanghera, published by Viking.
A Paperback will be out in September 2021

www.asianculturevulture.com will be returning to ‘Empireland’ in more detail later this year.