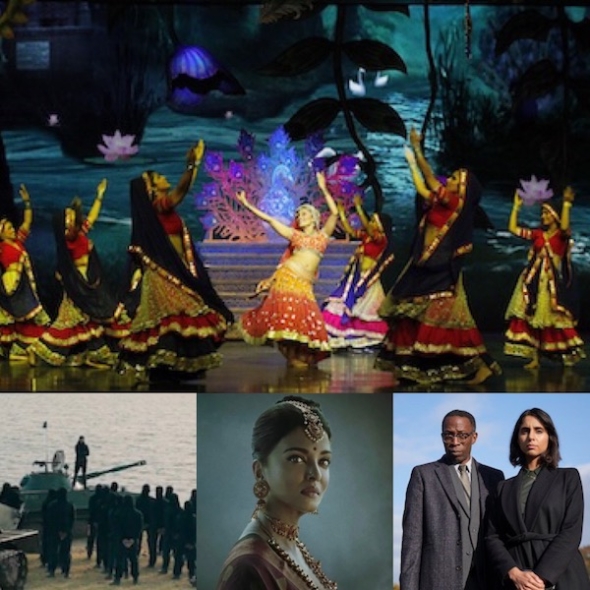 What to sink your teeth into over the next few weeks…

THE LONDON PALLADIUM’s dance show ‘Beyond Bollywood’ is returning to the West End’s Sadler’s Wells Peacock Theatre from tomorrow (August 24) and Saturday (September 3) after a successful run in 2015.
Written, choreographed and directed by Rajeev Goswami, the show is full of colour and vibrancy and dotted with Indian culture, dance and music.
There will be many different Indian dance genres including kalbelia, lezim, bihu, garba and kathak.
Sadler’s Wells posted on their Instagram: “Taking in dance from across the whole of India, Beyond Bollywood is a joyful exploration of music, dance and dazzling costumes.”
Music will be composed by sibling duo Salim-Sulaiman, known for their work on Hindi films and with lyrics by Irfan Siddiqui who has worked on Disney films such as ‘High School Musical’ and ‘Camp Rock’.

ACTOR Anjli Mohindra is to feature in ITV’s newest five-part thriller ‘The Suspect’, which launches on Monday (August 29). ‘Poldark’ star Aidan Turner will play the leading role of Doctor Joe O’ Loughlin, a criminal psychologist who helps an investigation into the murder of a woman before becoming the main suspect. www.asianculturevutlure.com has seen the first episode and reckons it will be a hit.
Mohindra plays DS Riya Devi, a police officer who helps solve the investigation and works alongside DI Vince Ruiz, played by BBC’s ‘Small Axe‘ star, Shaun Parkes.
The police procedural is produced by those behind ‘Line of Duty’, ‘Vigil’ and ‘The Pembrokeshire Murders’ and is adapted from Michael Robotham’s debut novel of the same name.

ANTICIPATION has been building for Tamil epic ‘Ponniyin Selvan: I’, which will be the first Tamil-language film to be released in IMAX worldwide on Friday (September 30).
Directed by Mani Ratnam, he has won numerous awards including the National Film Awards, Filmfare Awards South and India’s fourth highest civilian award the Padma Shri.
The film is based on Tamil author Kalki Krishnamurthy’s novel and, set in the 10th century, revolves around the early life of the most powerful king in South India at the time, Raja Raja the Great played by Tamil star, Vikram. All is not well, however, when Queen Nandini, played by Aishwarya Rai Bachchan, plots the fall of the grand Chola dynasty.
The Chola emperor was known for reinstating their empire and spread to Southeast Asia during his reign between 985 CE to 1014 CE.

‘Pippa’- The creation of Bangladesh…

BOLLYWOOD war epic ‘Pippa’ released its first teaser last week (August 15). With music from AR Rahman and produced by Roy Kapur Films, the film is set to come out on December 2.
Based around Brigadier Balram Singh Mehta’s book ‘The Burning Chaffees’ the film stars Hindi actor Ishaan Khatter (who stars in ‘A Suitable Boy’) as Captain Mehta, who fought on India’s eastern front during the Indo-Pakistan war in 1971 that led to the founding of Bangladesh. Khatter posted to his Instagram that he and everyone involved in the film had put their “heart, gut and soul” into the film and praised India’s defences in a post with the official one-minute plus teaser.
Roy Kapur Films posted the teaser on their Instagram channel with the caption:
“With a great sense of pride, on this 75th Independence Day, we unveil the teaser of #Pippa 🇮🇳
An action-packed war drama that brings to life the valour of our soldiers who fought the historic 1971 India-Pakistan war!
Releasing in the cinemas on 2nd December 2022.”
The title is referenced from a tank called PT-76 which was nicknamed Pippa.