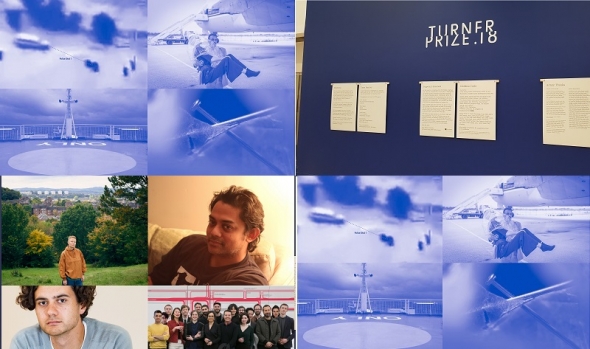 CHARLOTTE PRODGER’S Turner Prize 2018 win was a victory for the intimate and the mythical.

Her video, ‘BRIDGIT’ harked back to a landscape imbued with a spirituality long lost in the modern age – the unruly seas around Scotland and the highland forests (and ancient stone circles) in Aberdeenshire.

While much is made of her sexuality (she offers her own commentary on portions of the film) and the difficulties she encountered as a young person growing up queer in north Scotland, not enough attention, we feel, is paid to the spirituality of her work or its powerful feminine and feminist dimensions.

Perhaps, we are more widely influenced by our own art coverage from last year (2018).

At Edinburgh Art Festival we encountered the work of Ravi Agarwal – a visiting artist from India, he specialises in environmental causes and some of his printwork (made with help from Edinburgh Printmakers) also focuses on the landscape and ancient/Celtic symbols and myths. (More here)

It remains a rich and relatively unexplored subject.

His ‘Tripoli Cancelled’ features a middle-aged brown man in a suit wandering an abandoned airport. Shot in HD and featuring background music, it isn’t all that far from a conventional feature film.

The images are beautiful and remind us that alone, we can do very little but imagine…

Perhaps that theme is more resonant in his ‘Two Meetings and a Funeral’ – it is a study or a video essay on two multi-national organisations that took shape in the 1970s and offered a different vision for the world.

Ultimately, the Non-Aligned Movement, and the Organisation of Islamic Cooperation failed to deliver the change they were seeking.

Mohaiemen looks too at the peculiar position Bangladesh occupied in both. Shown across three large screens, it’s interesting for any student of world politics and is a powerful document of how much the world has changed in the intervening time.

Luke Wills Thompson’s films are incredibly static or at least the one acv saw is… and acv is tempted to say the descriptions of his work are more compelling than the actual films.

Perhaps that is to do him a great disservice. He looks at victims of violence and tries to offer a very different image, ‘spectacle’, you might argue. That his subjects are all black and from both Britain and the US reflect a critical and sharp statement on our world and its injustices (and prejudices).

Forensic Architecture’s ‘The Duration of a Split Second’ is harrowing, disturbing and engaging.

It depicts the clearing of a Bedouin village to make way for a new Israeli settlement. It’s violent, and not professional in some ways – the camera is simply held down, rather than switched off, as tensions rise,

The group’s mission is to draw attention to issues often overlooked, ignored or downplayed by the mainstream media. In these times, it reminds us that shooting a film (even something on your phone) can be a very political act in some spaces.

For some, this may not have been a vintage Turner year. All the work is moving image and videos – and represent a certain political focus.

That is good – but if you care to look at the comment wall just outside, many have declared the works “boring”. That may be harsh but Prodger’s work is both mundane and tough going in patches – and yet in some of the footage of the landscape, there is a sense of wonder in our physical world and why we must care for it much better.