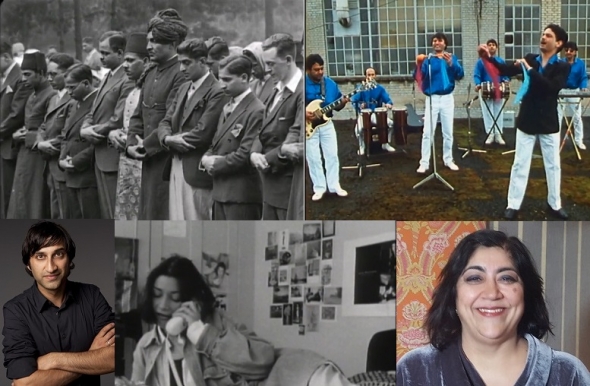 ASIF KAPADIA AND GURINDER CHADHA are just two British Asian filmmakers whose early work has been made available for free online viewing as part of the BFI South Asian Britain on Film initiative.

There are also some fascinating other modern films which are about the community in Britain and about figures who were prominent in their time.

Many of these films are very short (three minutes or less) but there is a huge range, offering unique glimpses of British Asian life in earlier times.

All put online this month, it is part of the wider BFI India on Film Season, which continues at the BFI Southbank London.

Next month also sees the films and works of Sanjay Kak being screened and assessed. Kak was a prominent British Asian filmmaker in the mid-1980s.

Oscar-winner Kapadia (for ‘Amy’ 2016) is the director of ‘Indian Tales’ made while he was a student at the Royal College of Art in 1994.

It looks at how Asian folklore has shaped the artistic and cultural landscape of Brits and Asians alike. It stars Amita Dhiri who went onto star in the cult BBC drama, ‘This Life’ (1996).

Mr Parmar in an ‘Indian Businessman’

Chadha’s documentary, ‘I’m British But…’ (BFI 1989) was the first ever documentary to examine the emergent British Asian music scene and is a sort of visual paean to a genre just emerging then, Bhangra and British Bangla music.

‘The Bradford Godfather’ looks at the life of one the first immigrants to have settled in Britain in the modern era (20th century). Mohammed Faisal Hussain was 73 when the film was shot and had moved to Britain 40 years earlier; he was known as the Godfather in Bradford, where he settled and became involved in filmmaking.

Produced even earlier is ‘Asian Pub Landlord’ – which looks at Hans Raj Dhanjal who ran a pub in Wolverhampton. You can see him struggle with some thick Black Country accents as he lends a familiar friendly ear to customers as a traditional English pub landlord.

Also part of this ‘community’ centred category of films is ‘Indian Businessman’ which charts the rise of Natraj Entertainment and the man behind it, Mr Parmar. He took over the Villa Cross Cinema in Leicester and screened Bollywood movies and became very rich in the process.

History buffs will love news footage showing Mahatma Gandhi’s 1931 trip to the UK for second India Round Table Conference at St James’ Palace. It had been convened to discuss the future of India as the clamour for independence began to grow. Entitled ‘Gandhi in England’ (BFI 1931), it is a short news clips but there also many historical clips like this which have never been publicly available before.

From ‘Insaaf’ in Urdu, a public information film about the 1968 Race Relations Act

There are also categories of film dealing with Ugandan Asians, the military, public information films and history, including Britain’s first purpose- built mosque, the Shah Jahan in Woking, which continues to this day. ‘Oriental Atmosphere’ (BFI, 1928) marks this. (It is pictured above)

Also available to see online is the first ever British made Hindi-language production ‘Pasand Apni Apni’ (BFI 1969) and a documentary as well, ‘London Me Bharat’ (BFI 1972). And if Urdu is more to your ear then ‘Insaaf’ (BFI 1971) is a public information film about the 1968 Race Relations Act and its bid to outlaw blatant discrimination in employment, housing and the provision of public services.

In all, there are 80 newly digitised films covering a times span of a 100 years with some of the earliest from 1914 and covering a period when the British were still firmly in control of India.

Can you help us identify the location of this bustling street in India? Dated as 1906, the city is unfortunately unknown #IndiaOnFilm pic.twitter.com/ldmzT2Gh5w