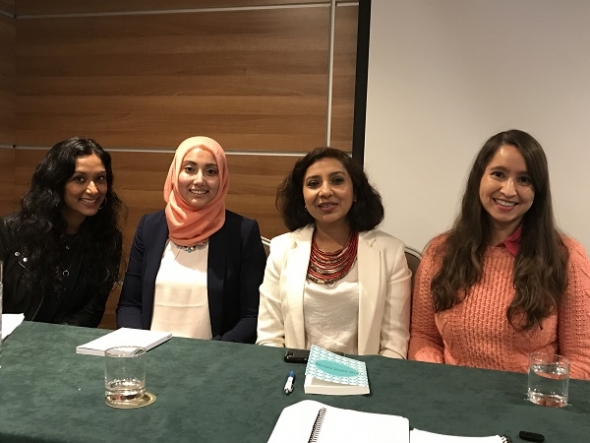 WHEN Leicester based literature enthusiast Farhana Shaikh launched The Asian Writer online magazine back in 2007 she was fuelled by a personal passion to get voices that weren’t represented in the mainstream book world, heard through a new platform.

What started as a website grew into an influential publishing company, Dahlia Publishing, where today she’s helping with new and established writers to get published. Shaikh also runs courses and workshops to assist BAME authors and is getting recognition for her own forays into creative writing.

Gautam Malkani with ‘Distortion’ and Winnie Li and ‘Dark Chapter’

Last year, the inaugural Asian Writer Festival celebrated the site’s 10th anniversary but having it for a second time cemented it as an event that’s both important and hugely useful for anyone from the South Asian diaspora who is interested in being published.

The event featured a host of writing talent, reading their work, sharing their experiences and talking honestly about their journeys to date from that first time they felt confident enough to call themselves a writer, to issues of whether pen names matter and when to draw the line between real life and fiction.

Now don’t worry if you missed it; here’s some ‘takeaways’ to get you ready for National Novel Writing month, which takes place each November – where participants are encouraged to write a little every day for 30 days and hopefully reaching a target of 50,000 words by the end of it.

Here’s five takeaways for aspiring writers from The Asian Writer Festival 2018 held on Saturday, October 20 in The Wesley Euston Hotel.

*Put in the hard graft
Keynote speaker Vaseem Khan (author of the very successful Baby Ganesh detective novels) opened the conference with a tale that will give even the most nervous of writers hope.
He shared his writer’s journey of how it took 24 years of rejection before he finally got a publisher, and since then he’s written a best-seller and landed a multi-book deal.
Vaseem said: “No one is born with a writing gene or being a literary genius, you have to work at it just as you would exercise your tennis skills if you were Roger Federer.”
He went on to describe why practice really does make perfect: “Write every day. If you don’t want to write, edit, and if you don’t want to edit, read as this will help you learn how to create dialogues and characters.”

*Know the rules (though you don’t need to follow them)
The general consensus amongst the writers present at the festival was to be aware of writing rules but don’t be led by them.
Winnie M Li’s ‘Dark Chapter’ is inspired by a true event, her experience of being raped by a teenager and is split into two perspectives: the victim and the rapists.
Winnie drew on her own memories to write the female character’s side but she had to fictionalise her attacker’s story as his life and background was so different to her own.
Li said: “He was 15, an illiterate Irish traveller, what he did was unacceptable, but his life was so different to mine and writing fiction allowed me to imagine that.”
In a discussion about the writing rule of ‘show, don’t tell’, Li explained how she tried to stick to it, but also gave her male character some backstory to explain his motivations. Some of the feedback she received was that this made the story ‘too preachy’ as she was giving the story a moral context which is discouraged in fiction but her personal feeling was she had to do this so that her writing didn’t become harmful and misogynistic.

*Use your experience as a springboard
Gautam Malkani’s Distortion was rejected 19 times before it was crowd funded, allowing him to share a story he hopes will be a resource for anyone facing a situation similar to the one he found himself in: “If I’d had this book as a teenager, life would have been better for me and my mum.”
The novel is about being a young carer; something Gautam and his brother experienced between the ages of 12 and 21, but it’s non-biographical as Malkani explained: “I thought about making it a memoir but making it fiction allowed me to take out the boring bits.”
So rather than tell his story, Gautam used it as a springboard to get the initial idea going but it was speaking to young carers and taking their experiences into account that shaped the book.

*Call yourself a writer
Writer Emma Smith-Barton who’s debut Young Adult novel The Million Pieces of Neena Gill will be published next year spoke with honesty about how it took her years to call herself a writer but firmly advises that if you write anything then you are a writer.
She explained: “I’ve been writing since I as 11, I did a BA I Creative Writing, had a short story published by The Asian Writer and two in Myslexia magazine but I still couldn’t call myself a writer. I could call myself a teacher which is what I did as my day job but not a writer.”
It wasn’t until she was pregnant and had to stop working due to illness that she realised that as she was no longer a teacher, she had to be something else but while she toyed with calling herself a writer she didn’t tell anyone is was her profession. Emma was accepted onto the prestigious Write Now programme by Penguin and it was only when her mentors and editors referred to her a writer that she finally felt confident enough to say she was one. Smith-Barton’s words of wisdom were that no one else should leave it this long and that you should call yourself a writer from the beginning of your journey not when it’s validated by others.

*Don’t compromise on your values
This was a topic that came up throughout the festival and was explored in a session run by literary agents Federica Leonardis and Lorella Belli, kicked off with a questions about your pen name and the issues that come with having an ethnic sounding name.
For Belli the issue was irrelevant, while Leonardis described how she does have clients with different pen names and the impact names can have on a cover, as much as what the cover looks like.
Though she recognised change is happening, she did point out that names can have some impact on a reader choosing a book but that’s not an author’s problem, they need to focus on writing the best book they can and be true to themselves by having the name on the cover that they want’ – the marketing of the book should resolve any other issues.

Similarly an audience member explained that although she is white British, she’d written a character who was Bangladeshi which she discovered didn’t go down well with publishers due to cultural appropriation.
Both Belli and Leonardis expressed their concerns and made it very clear that as you’re writing fiction you have every right to write characters you want. Leonardis encouraged: “If women couldn’t write male characters and the reverse, no stories could be written. As a writer you should write about any type of person you want as long as it’s well written that’s the most important thing, not whether you have experienced being that person – that’s why it’s fiction and not a memoir.”

Feeling inspired to take out a pen and paper (or power up your laptop) and get writing? During the festival Farhana hinted at her next plan to the eager audience: she’s hoping to publish a collection of short stories by British Asian Writers in 2020, so get your thinking camp on now and get ready to submit!

Privacy & Cookies: This site uses cookies. By continuing to use this website, you agree to their use.
To find out more, including how to control cookies, see here: Cookie Policy
← ACV marks 10 years of the London Indian Film Festival (LIFF) with reception and screening of film, ‘Sir’ at BFI Southbank… (gallery)
Sharmila Tagore – 60 years in film and screening of ‘Life Goes on’ and tribute to Girish Karnad… →