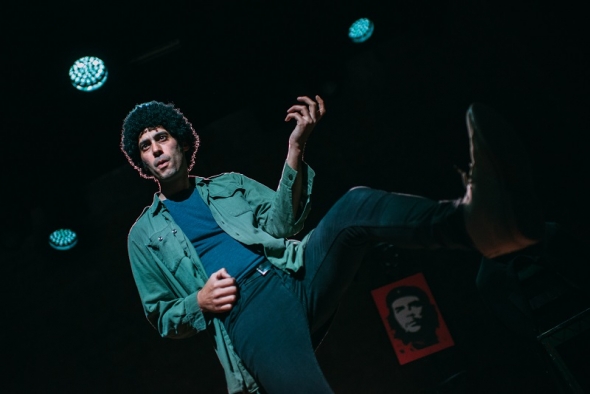 ACTOR Robert Mountford has been performing his one man show, ‘Vagabonds: My Phil Lynott Odyssey’ off and on since he made his debut at the Edinburgh fringe in 2015.

It’s a moving and humorous piece which mixes his own personal story, with that of performer, Phil Lynott of Thin Lizzy fame.

The title itself is taken from ‘Vagabonds of the Western World’ the third album by the band, Thin Lizzy.

“Phil Lynott’s story is deeply tragic but utterly inspiring and I drew those parallels in my world,” he told acv.

Mountford feels particularly honoured as he has been invited to open his show at The Vibe for Philo – an annual festival commemoration that takes place in Dublin on the death anniversary of Lynott on January 4.

The 33rd such event will take place later this week at Whelans a live music venue and the three-day event is dubbed “part celebration, part wake, part convention”.

The Festival itself runs runs from January 3-5 and “Vagabonds will play before the bands come on and it is pretty special,” said Mountford.

Lynott was a prominent and popular figure on the international rock scene and died aged just 36. He led what many would say was a ‘rock and roll lifestyle’ and it caught up with him, eventually.

In the show, Mountford mixes Irish mythology, his own personal story of being an adopted child brought up in the Midlands, his relationship with his adored older brother, “Dave” (David) – whom he idolised with that of the life of Phil Lynott, a mixed race child who was born in West Bromwich but grew up in Dublin with his grandparents.

In the prologue of the play, he tells the audience he wants to explore “what makes a hero?” then takes on the persona of Cú Chulainn an Irish mythical folk hero, before moving on to other heros, such as Lynott and his brother, Dave, who introduced him to rock music, politics and a “rebel imagination”.

Mountford, who trained at RADA told www.asianculturevulture.com that he always wanted to explore humour and to do a one man show, which gave him the opportunity to create his own work, instead of “waiting for the phone to ring”.

The show written by him and Chris Larner (who also directs), he plays many parts, jumping from being himself to others mentioned above, his mother and his childhood friends. He parodies his family life in the Midlands, and reveals he too was adopted and brought up in a Catholic household.

His mother gave him up for adoption and he doesn’t know much about his biological Kashmiri father. Acting was an outlet as he discovered he could be anybody.

Mountford recently completed a tour of ‘The Habit of Art’ the Alan Bennett play directed by Philip Franks, while his other credits have included the title role in Tara Arts production ‘Macbeth’; ‘Anita and Me’ (at Birmingham Rep); ‘Much Ado About Nothing’ (Iqbal Khan RSC West end) and ‘The Black Album’ at the National for Tara Arts.