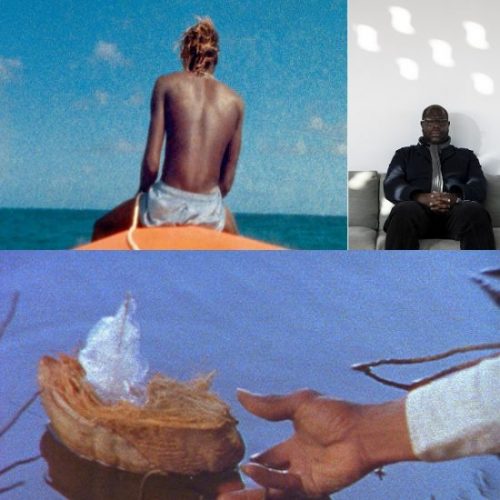 • Only artist to have both an Oscar and Turner Prize
• 3 works never displayed in Britain before
• First major show in 20 years
• Tate Modern Exhibition opened yesterday (February 13-May 11)
• See listing for talks and events, including McQueen in discussion next week

YOU might humorously and a little cheekily remark this is Steve McQueen’s greatest hits show.

For the first time in over 20 years, the visual artist McQueen takes centre stage – his art has not been on display in this manner for quite a time.

He is probably without equal in being the Renaissance artist par excellence in Britain and arguably, the West, today. No other artist can boast both an Oscar and a Turner Prize. His Oscar as a director came for the film, ‘12 Years A Slave’* (2013).

There are 14 works in all on display – all but one contain moving images – there is one powerful installation too ‘Weight’ (2016).

Set aside a decent amount of time to visit this exhibition – some films are very short, others very long – and not meant to be watched – and can’t be – in their entirety – ‘End Credits’ (2012-), a tribute to the 20th Century American black actor and activist Paul Robeson – is over five hours long as a film and the audio is over 42 hours!

Both are poignant films about death, opportunity and how we might deal with the passing of a loved one – or even a stranger or someone we knew only fleetingly but liked and enjoyed meeting.

Perhaps that last statement says a lot about ‘Ashes’ (2002-15) and is a companion piece to ‘Caribs’ Leap’ (2002). This is all about a day in the life of Grenada, in the West Indies, and where part of McQueen’s family heritage lies. In ‘Ashes’ there is film of a young fisherman at the very height of life, one might say, and simply enjoying his environment and life and shot by McQueen when he was in Grenada in 2002.

Fiontán Moran, Tate Modern assistant curator, who helped to put together the exhibition, explained in a press briefing at Tate Modern, earlier this week (February 11), that ‘Ashes’ (2002-15) is something of a tragic postscript to ‘Caribs’ Leap’.

The young man in ‘Carib’s Leap’ was murdered a year later – he stumbled upon a drug dealer’s hidden stash and was killed.

McQueen returned, said Moran, and paid for a headstone to be created in Grenada and the film ‘Ashes’ is a tribute to that young man – and a reminder that when life is good and kind, we must cherish and savour that – for no one can see what lurks around the corner.

Another very personal film which had a personal impact was ‘7th Nov’ (2001). This is another very touching and emotionally powerful work (23mins). In this video interview – but far from a traditional framing – you can’t see the subject’s face – McQueen’s cousin, Marcus, reflects on that fateful date – when he accidentally shot his beloved brother. It’s rare that you hear someone talk so very frankly about what it means to take another person’s life and that too someone close and special to them.

Perhaps of less obvious personal import but strangely fixating and fascinating is the hazy unclear digital image of McQueen in a Paris hotel room before a show the following day and simply lying there with the French TV on and the changing light and perspective it contains (‘Illuminer’).

This is a rich exhibition and as you enter you are confronted by the huge screen depicting ‘Static’ (2009) – which is a film of the Statue of Liberty – and you are forced to contemplate what it means.

Throughout, there are interesting themes and reflections and there is much hidden beneath the obvious surface on migration, displacement, settlement and belonging.

If you have any interest in any of these, you shouldn’t let this exhibition pass you by.

There is also very loosely a more recent ongoing companion piece to McQueen’s latest artwork ‘Year 3’ on show at Tate Britain until May 3 (this year) – which is portrait of Year 3 pupils from around London.

He said of his exhibition at Tate Modern: “I remember my first school trip to Tate when I was an impressionable eight-year-old, which was really the moment I gained an understanding that anything is possible.

“I am very happy to be presenting my work in my hometown of London, especially at Tate Modern, where in some ways my journey as an artist first began.”

McQueen, 50, was born in London, and grew up in Hanwell, west London and studied initially at Ealing, Hammersmith and West London college, and then the Chelsea School of Art and completed a fine art degree at Goldsmith College, University of London, and where he first became interested in film. He won the Turner Prize, Britain’s most prestigious art prize in 1999.

Saturday & Sunday March 14-15, 12pm-6pm
Steve McQueen: It’s Just a Matter of Time, Tate Modern, McAuley Studio
A weekend workshop led by writer and curator Mason Leaver-Yap looking at the different ways writers might respond to moving image artworks. Over the two days participants will discuss a range of experimental approaches to writing and will have the chance to develop their own writing practices, with visits to the Steve McQueen exhibition. (Tickets £60; Concessions £40)

Privacy & Cookies: This site uses cookies. By continuing to use this website, you agree to their use.
To find out more, including how to control cookies, see here: Cookie Policy
← ‘Dishoom!’ – Gurpeet Kaur Bhatti on ‘Sholay’, finding the superhero within and empowering people to speak up…
Toronto International Film Festival – a wrap, our first TIFF (#tiffacv18) Awards and interviews to come… →