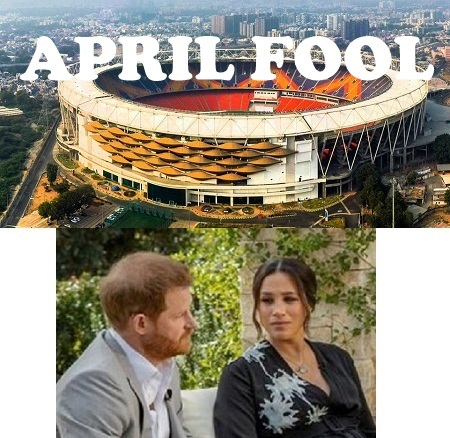 Check the date…yes, this was our April Fool story this year… (see the others ones we have published over the years – links at the bottom)

A BRITISH Asian tycoon has exclusively revealed to ww.asianculturevulture.com he is working on a spectacular culture show that will culminate in a proposed 30-minute live stage interview with Prince Harry and Meghan in the world’s largest cricket stadium.

The successful entrepreneur, who routinely appears in global wealth lists, said he has already been in touch with representatives of Prince Harry and Meghan and is very confident he can secure their agreement.

The stadium being proposed is the Narendra Modi Stadium in Ahmedabad, Gujarat.

It can hold 132,000 spectators and was used when former US President Donald Trump helped to inaugurate the engineering marvel in February 2020, when it first opened its doors to the public following a reported $110 million renovation. It also hosted the recent T20 Series and two Test matches between India and England and is set to host several games in the latest edition of the IPL which begins on April 9 – but is unlikely to feature specatators as a new wave of Covid infections spread across India.

“It’s got to be the Narendra Modi Stadium – how do you better President Trump,” said the businessman, who doesn’t want to be named as early negotiations progress between his representatives and those of Harry and Meghan.

“This is essentially a charity initiative – I will be footing the costs of flying everyone to India and putting them up and all that.

“Ticket sales, global online sales and media exposure and a charity fund – all those monies will go to the groups and charities they represent. We expect to make a very large contribution to Harry and Meghan’s charitable foundation as well.”

He told acv he would like to combine all this with the T20 ICC World Cup Men’s cricket tournament, which is being held in India in November this year.

“It would be great – imagine this either just before or just after – my people are talking to the ICC and tournament people there – if we can’t do it in November, we will look to early 2022 – it might be better for all concerned but I am determined to do this – whatever the timing.”

He said he felt inspired to do this because of growing concerns about his own health.

“I am old, in my 80s and sadly, I’ve been diagnosed with a terminal condition.

“I am ok for now but I want to do something spectacular for the world – if I do deteriorate and cannot see this through – my family have vowed to take this project onto its conclusion – they know how important it is to me.

“Also the professionals who have worked so closely with me for many years, are equally determined. I am confident we can do this – whether I am around or not, it doesn’t matter – the show must and will go on.”

He said he wanted to put the word out through acv because he wants cultural groups and organisations to be involved in the culture show, which will celebrate both the best of Britain and India.

“I want a real mix – it will be a variety show like no other and contain everything from high minded Indian classical music to comedy and Bollywood dance.

“I am very excited about this – my organisers and myself want to make this a totally open process – of course there are people we could go to, but we want to hear from anyone and everyone. We talking to possible comperes and of course the interviewer for the Prince Harry, the Duke of Sussex and Princess Meghan, the Duchess of Sussex section.

“I know we could raise a lot of money for very deserving charities. And this would excite both countries.”

When asked why he wanted to secure Harry and Meghan, the businessman, said: “The world is such a different place to when I started out in India. Who would ever thought a woman of colour could marry into the most famous family in the world.

“Personally, I am very disappointed with everything that has happened. I think they are both fantastic people with so much to contribute. It’s really sad what has happened. Families all have their ups and downs but honestly… I want to remind people what is important about life.”

He said the diagnosis had forced him to look at his own legacy.

“I want something amazing to come out of all this. I didn’t know what to say or think and it (the diagnosis) was in November. I was in a bad way until I talked to people about this idea and they loved it.”

He said he would reveal more as details became available and would give out a website and email address tomorrow – so stay tuned to www.asianculturevulture.com!

No one from Archewell, the organisation set up by the Duke and Duchess of Sussex was available for comment.