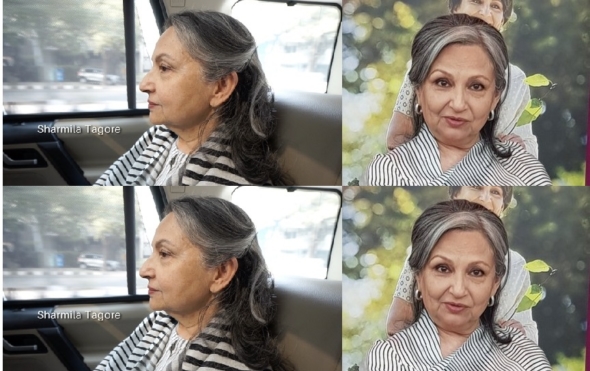 She is one of the most famous names in Indian cinema, but she never got her chance behind the camera; her work on a recent documentary film about women directors led her to share her reflections with us…

INDIAN screen legend Sharmila Tagore – who broke the mould for women in India as an actor – has told www.asianculturevulture.com she came very close to directing two projects and still harbours the ambition to do so.

A screen idol, who was an early muse for the legendary Indian director Satyajit Ray, appearing as the child bride in ‘Apur Sansar’, the final instalment of the director’s famed Apu trilogy in 1959, she went onto establish herself as one of the Indian film industry’s most popular screen figures.

There were a string of hits from the late 1960s and into the 1970s, and she was regarded as an absolute equal to the men she starred alongside, reportedly paid more than her similarly illustrious co-stars, Rajesh Khanna and Dharmendra.

“This is a dream I still nurture,” Sharmila Tagore said of her ambition to direct and responding to acv questions about her involvement in the 14-hour epic documentary project, made by Mark Cousins and available in full from last month on the BFI player, ‘Women Make Film’. (See link below to read about this.).

Organised by themes, such as politics, sex, death, comedy and many other subject classifications, the documentary shows how women directors from 1907 to the present day, have framed stories with the emphasis on how the directors have used their camera to tell their stories – and the commentary is provided by Tagore and several other notable women from the world of film, including Jane Fonda. In the film, Tagore narrates the sections on Dreams, Home, Gear Change and Religion.

“I actually did want to direct,” Tagore told acv. I did think about directing very seriously.”

She recalls how she embarked on producing a 13-part TV series for Katha, a leading publisher of Indian comics and graphic works, depicting stories from Indian mythology, for children, mainly.

“But the channel heads that I approached were unconvinced about the commercial viability of such a project.”

Ghosh is one of the most celebrated auteur filmmakers of recent times from India and died in 2013, aged 49.

Tagore is still seen by many as the epitome of on-screen Indian grace and beauty and daringly donned a bikini for ‘An Evening in Paris’ (1967) – becoming the first Indian actor to do so in popular cinema.

She was also chair of the Indian censor board (2004-2011) and served on the main Cannes Film Festival jury in 2009. Her marriage to India’s youngest ever cricket captain, Tiger Pataudi (and the Nawab of a princely state) in 1969 only added to her lustre. Their son Saif Ali Khan is a Bollywood star and her daughter Soha has also acted and is now more of a writer, while other daughter Saba is a jewellery designer.

Tagore feels if she had had more support for her idea, she would have got the green light to make it.

“Today, no one questions the viability of anthology projects. Looking back, I feel I should have had a partner who could have looked after the business and marketing side of the projects.”

She also came close to directing a feature film in the mid-1980s, she told us.

She asked another much respected figure, playwright Vijay Tendulkar to help her.

“I had a story idea about an autistic child that I had asked Vijay Tendulkar to develop.

“I was quite passionate about it and even wrote up several scenes but the project did not work out.”

She intimated that it was difficult to take on the responsibility of directing a feature film and look after her family – a pressure women feel more than men, even today.

“As an actress, I could finish my shift and come home but as a director, the work would never leave me. I think I was overwhelmed with my work and the responsibility of family life,” she explained.

She also felt working practices at the time in India meant there were other challenges that made such a project more daunting than it might have been.

“If at the time, we had the modern means of communication that we have today and a more professional industry where punctuality and discipline could ensure better time management, I probably would have been able to make it work,” she outlined.

“So yes, I did think about directing very seriously,” she told acv in an email exchange.

Her role in ‘Women Make Film’ is all the more striking – because she is the only woman narrator on the film, not based in the West. The other narrators are Tilda Swinton, Debra Winger, Kerry Fox, Thandie Newton and Adjoa Andoh.

Tagore said she was delighted to have been working again with Cousins, having helped him with his earlier, ‘The Story of Film: An Odyssey’ (2011).

“It is particularly rewarding to work with a friend on a project that one strongly believes in. I felt that this project was, in scope and scale, quite unprecedented,” said Tagore, who is also the great-grand niece of Indian Literature Nobel Laureate Rabindranath Tagore.

She felt the contribution of women behind the camera had either been ignored or neglected and they did bring something different to the art form.

“Women, by and large, experience the world differently from men simply because the world is tilted in favour of men.

“For this reason, women can offer a different perspective and sensibility. This is women’s most important contribution to cinema.

“However, it is equally important to state that women don’t have a consensual or singular vision of the world.

“The diverse identities, experiences, geographical and social locations that women occupy, make their perspectives diverse. It is this diversity that we should seek to express. I am happy that such a diversity can be seen in the film made by Mark Cousins” she told acv.

She has been at home in Delhi since the Pandemic and recently served as part of an Indian online short film competition jury and told the media she has been taking classes on Greek and Roman literature and poetry, and using the time to watch contemporary features.

Cousins said he wanted Tagore to work on ‘Women Make Film’ quite simply, because she is “one of the greats” and “she has real creative credibility”. He is familiar with Indian cinema, having worked with another Bollywood screen legend Amitabh Bachchan, and the much admired indie filmmaker Mani Kaul (1944-2011) for ‘The Story of Film: An Odyssey’, and cites contemporary documentary-maker Anand Patwardhan as a particular inspiration.