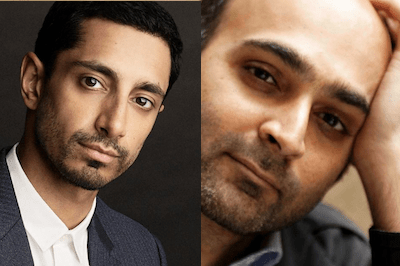 HE IS ONE of the hottest actors on the planet at the moment.

He is one of most successful of contemporary writers and is also of Pakistani heritage.

Together, they will discuss the subject of migration and magic.

The actor and the writer will share their thoughts on migration and magic for the London Literature Festival on Sunday (October 28) at the Southbank Centre and have more than a passing association.

Riz Ahmed and Mohsin Hamid are most obviously bound by Hamid’s bestseller and Booker-nominated ‘The Reluctant Fundamentalist’ (2007) – Ahmed starred in the film version (2012) made by Mira Nair.

Arguably, it was Ahmed’s Hollywood’s breakthrough role and you could make the case that without this part, there would be no ‘Night of’ and no Emmy – Ahmed is the first South Asian man to win this prestigious US TV award.

Hamid’s latest novel, ‘Exit West’ is a panoramic study of a couple who find themselves marooned in one place but looking to escape to another.

Hamid grew up in Pakistan but went to the US to study and later worked in banking and lived in London as well, becoming a full-time writer and moving back to Pakistan.

Ahmed can be seen in the Hollywood blockbuster ‘Venom’ and also has a lead part in ‘The Sisters Brothers’, which had a UK premiere at the recent London Film Festival. It is an alternative Western directed by Jacques Audiard, who made the critically acclaimed, ‘The Prophet’ and ‘Rust and Bone’.

‘The Sisters Brothers’ enjoyed its North America premiere at the Toronto International Film Festival (TIFF) last month and acv asked Ahmed about the role and what if anything did he find in the character that related to him. You can read that story here.

Ahmed also raps, and is part of a US-baed outfit, called the Swet Shop Boys. He lives mostly in Brooklyn these days.

He is also a writer – contributing to the seminal ‘The Good Immigrant’ edited by Nikesh Shukla.
And last year it was announced he would create a major six part drama series for BBC2 called, ‘Englistan’.

It is a multi-generational drama, and will cover a period from the late 1980s to the present day and aims to show an ordinary London Muslim family cope with the pressures of the times.

It is likely that Ahmed will draw upon his varied experience of growing up in Wembley. He won a scholarship to a famous public school, Merchant’s Taylors and then attended Oxford University before getting into acting.

Hamid’s latest work, ‘Exit West’ was cited by US President Barack Obama as one of his best reads in 2017, and his first novel, ‘Moth Smoke’ (2000) signified the advent of a major Pakistani and South Asian writing talent and has been borne out by prizes and accolades.

Before the talk, he told the Press Association, he was a little fed up of hearing men complaining and criticised Brexit.