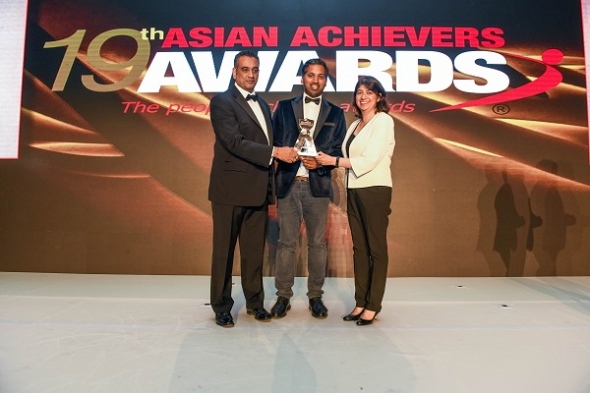 A JOURNALIST, a community activist, a lawyer and a diversity champion were among those recently recognised at the 19th Asian Achievers Awards (AAA) in London.

Faisal Islam, Param Singh on behalf of his brother, Onkardeep, Krishna Omkar and Neela Patel, all spoke to www.asianculturevulture.com about the respective wins – first announced on The Grosvenor in Mayfair on September 6.

The AAAs – as they are fondly known — is run by Asian Business Publications Group (publishers of Gujarat Samachar in the UK) and recognises contributions of South Asians in the world of business and the professions, and this year the group chose to highlight “inclusivity” as one of the main themes of its awards evening.

Faisal Islam, a familiar face on Sky News for a few years, is now Economics Editor at the BBC, won the Media, Arts and Culture Award for his broadcast journalism.

A proud Mancunian, he has won many glittering prizes in his career including the Royal Television Society Award (2017), Interview of the Year for his grilling of then Prime Minister David Cameron.

Speaking after receiving his AAA, he told acv that he was “honoured and humbled to be holding politics to account,” and if his stories could serve as an inspiration for the next generation, he was delighted.

Islam said although the Asian community has developed over the past 20 years from being rooted in conservative values and despite being incredibly sociable, they did not talk about difficult subjects and these taboos “can put incredible pressures on modern life”. He cited mental health as an example of a taboo subject. “I’m not sure our community copes with this very well and we need to talk more openly about it.”

Faisal has also experienced racism during his career as a reporter, but he was not the type of person who dwelled on it, and said he found that some of it came with the territory.

“When I started doing politics, people generally have a hostile relationship with political reporters, and I did get quite a lot of angry Twitter action, I didn’t want to be a victim so I basically ignored it. When I intervened, with a bit of humour and assertiveness you can be in control of the situation. I don’t want to overplay it, but I come from a typical Asian family network where I was told when I was ten you need to be twice as good as the next person.”

Islam explained that he has tried to “develop specialist expertise” and although “at various junctures people have tried to get me to write about minority issues specifically and I have always said ‘No’. I am a dispassionate objective journalist.”

“It’s quite interesting as soon as you go into subjective journalism, as soon as you let yourself be defined by who you are, what you are, where you are from, it can help you in the short term but I fear for some of my colleagues it can turn into a bit of a cul-de-sac.

“I’ve covered politics, I covered economics, and journalism generally is about being ruthlessly objective so if you start to do opinion based journalism based on your ethnicity or religion you have to be careful. It can start to over-define you.”

When asked which Asian business personality he’d most like to interview, he said he was split between Microsoft CEO, Satya Nadella and Reliance Industries CEO, Mukesh Ambani – “a fascinating figure who has developed a massive mobile phone network in India to see if he’d be up for an interrogative interview.”

Launched in 2015, Ambani, India’s richest man created the Jio mobile network, offering low price deals which included unlimited data – from a standing start it has gone onto become the country’s number one mobile phone operator with more than 300 million customers.

Param Singh, who collected the award on behalf of his brother, Onkardeep Singh, for his ‘Achievement in Community Services’, as founding member of the City Sikhs Network (CSN).

Singh said the CSN was all about inclusion and among the first Sikh groups openly inviting people of different backgrounds and sexual orientations to its fold.

Krishna Omkar was awarded Professional of the Year for his work in the field of LGBTQ activism. He works as a corporate lawyer with King & Spalding, undertaking mergers and acquisitions in the city and got involved with LGBTQ activism particularly on the legal side in a pro bono capacity as one of his friends was a petitioners in the Section 377 decriminalisation case in India which successfully challenged the ban on same sex relationships.

Omkar welcomed the platform that ABPL AAA had provided to discuss inclusivity as he felt it is part of Asian culture.

Another inspirational person was of the evening was Neeta Patel, awarded Woman of the Year. She was very emotional upon receiving the award: “It’s quite humbling I feel quite emotional about it, I am not sure why, I haven’t saved lives”.

Patel, who speaks in very measured tones explained that “inclusivity” was something ingrained in her work ethic since she began her very first job as a sales rep with a subsidiary of BT in 1986.

Patel, whose parents came to the UK as immigrants from Kenya in 1973 with four children and had very little money, looking for a new home and a new place to settle the family, said — that her parents had to learn a new language and new customs, and there was a part of me that thought why are we different. But, she soon realised “that everyone has something to add, something to give and something to offer and everyone is trying so that has been a leitmotif in my management career in last 20 years”.

Patel said she had just been appointed to a board of plc. Tech called Allianz Technology Trust which is a half billion pound investment trust and she is the Chief Executive Officer for Centre for Entrepreneurs, where she tries to connect the creative industries and technology together.

“In what I am doing right now, I would love to see somebody with a fine arts degree working with a chemical engineer, somebody with a drama and design degree working with computer scientist because that’s where the best ideas and products come from when creative industries sit down and work with coders, computers engineers, I genuinely feel that. I seem some of the best businesses coming though my foundation”

There was some controversy and murmurs from the room when the Life Achievement Award was given to Anil Agarwal, chairman of London-listed resources conglomerate, Vedanta Resources.

In recent years, the company has been a target of environmentalists and famously lost its battle to build a bauxite plant in Eastern India after local tribal groups complained that their way of life would have been destroyed by the industrial activity. Much of this obscures Agarwal’s incredible journey from Bihar – one of India’s poorest states to Mumbai, where he first traded in unwanted cable and began to build a resources’ powerhouse with a global footprint.

Comperes Nitin Ganatra and Nisha Parmar kept things moving along on the evening and there were, performances by Epika dance, and the bikers as well as an auction run by Lord Jeffrey Archer which raised over £131,500 for Yuva Unstoppable, an NGO helping to create infrastructure for schools in cities in India and educating underprivileged children.

In all nine awards were presented on the evening.

Privacy & Cookies: This site uses cookies. By continuing to use this website, you agree to their use.
To find out more, including how to control cookies, see here: Cookie Policy
← Empress India ‘more enduring and pervasive’ – Professor Miles Taylor asserts, as he discusses Queen Victoria role with Shrabani Basu, author of ‘Victoria and Abdul’ tomorrow at ZEE JLF at British Library
London Men’s Fashion Week: British Bangladeshi designer Rahemur Rahman puts the natural world at the centre of his new collection →