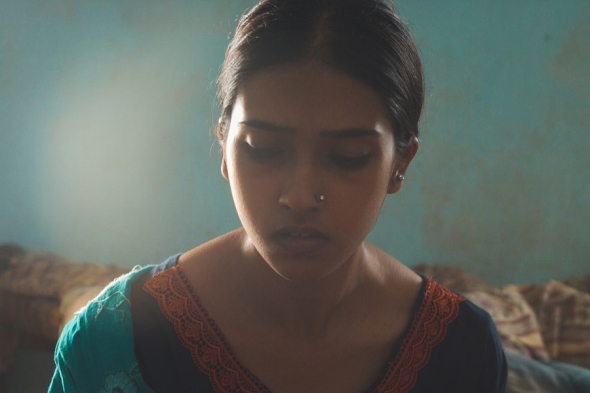 IT SEEMS unlikely on the face of it – a feminist Pakistani western but that is precisely what ‘My Pure Land’ is.

Written and directed by Brit Sarmad Masud, the film is inspired by true events and tells the story of how an 18-year-old girl resists a gang of armed rowdies led by her uncle and looks to protect her property and her family.

Beautifully shot on a modest budget and with a very strong performance from Suhaee (pronounced Suhai) Abro, ‘My Pure Land’ shimmers and draws you in – and just like in any Western, you know know who are the good guys (well, Suhaee playing Nazo – and her family) and who are the baddies.

At one point Nazo (Suhaee Abro) goes to visit her father in jail. Set designer Caroline Bailey (wife of Sarmad) fell ill after getting carbon monoxide poisoning in the studio where she created the jail. She was hospitalised but made a full recovery to rejoin her husband on set.
“I couldn’t have made this film without her,” Masud told www.asianculturevulture.com

What is remarkable is the central performance – Suhaee is a dancer and has never acted in a feature film.

In ‘My Pure Land’ she exudes a steely, determined, powerful and engaging presence, and it will be interesting to see whether she can capitalise on the talent she clearly exhibits in what is Masud’s first feature too.

The London-based filmmaker has enjoyed some success making shorts with ‘Two Dosas’ featuring in the 2014 London Film Festival, winning a clutch of awards, being longlisted for both a BAFTA and an Oscar in its category, and Masud was also behind the 2009 Urdu-language ‘Adha Cup’ on Channel 4.

“I had made a short in Pakistan and was getting married in 2014 and my wife (‘My Pure Land’ set designer Caroline Bailey) joked: ‘When are you going to grow up and get a proper job?’,” he recounted to www.asianculturevulture.com

He knew he needed to take the step up.

He explained: “Initially, I was thinking about a making a version of ‘Copland’ (1997 with Robert De Niro on the trail of corrupt police officers in New Jersey), but then came across the story of Nazo Dharejo, it immediately struck a chord with me, it was a beautiful story.”

Dharejo is something of a folk hero in her village for standing up to authority (some of it corrupt and elitist), and showed she could be as tough and resolute as any man – that comes through really well in the film and encapsulates an important message for Masud.

“I pitched it as a feminist western but within that is a Trojan Horse story of a father and daughter.

“Nazo’s father was a forward-thinking man for that generation and you never see a Pakistani or Muslim father like that in the media or in film but they exist. People are proud of that.

“The essence of it is that she did what she wanted and she was supported by her father and regardless of what you think about Pakistan, I don’t think the word feminism and Islam and Pakistan should be oxymorons (contradictory) – they can go together.

At first, Masud raised the money to make ‘My Pure Land’ through friends and family, but then got a meeting with Everton Football Club owner, theatre and film producer Bill Kenwright – but not for this film.

“They were looking for a director for a film they were going to make. I successfully talked myself out of a job they were offering and pitched a modern day feminist Western set in Pakistan – and it turns out Bill likes a Western.”

The finance provided by Kenwright was still modest, in fact, Masud describes it as a micro-budget and declined to disclose any figures, but said: “It’s less that what a Premier League Footballer gets paid in a week.”

Despite the limitations of a micro-budget, Masud shows what you can do with imagination, a decent story and most all, strong characters.

It’s even more amazing that none of the actors are names others might recognise.

Getting both Suhaee and Syed Tanveer Hussain, (Nazo’s father and referred to as ‘Baba’ in the film) who are the core of the film, was something of a coup too – but not for the usual reasons.

“I had a fixer in Pakistan and he kept sending pictures of people he thought were appropriate but they all had green contact lenses and were very fair-skinned; I said look, ‘we are making this in a village, they are going to stick out like a sore thumb’, so I sent him a couple of pictures for reference – Freida Pinto in ‘Trishna’ (Michael Winterbottom’s 2012 remake of novel ‘Tess of the d’Ubervilles’ with Riz Ahmed and set in contemporary India) and Sameena Jabeen Ahmed (who won best newcomer at the BFI London Film Festival Awards in 2014 for ‘Catch Me Daddy’.)

“I couldn’t find Nazo, and then someone showed me a pictue of Suhaee, and she looked really interesting. We did a Skype audition and the internet was so bad it looked like a watercolour, I couldn’t tell anything.”

Nazo (Suhaee Abro) far right with on screen family; Baba (Syed Tanveer-Hussain) her father in the film is second left

The film was shot around a farmhouse a short distance outside Lahore; the Nazo Dharejo story is set in Sindh, but Masud didn’t want the place or the time to be too specific.

“Suhaee flew in from Karachi the next day and she did the casting, I said to her – what do you think? She was not like anyone else, she said she wanted to do it again. I knew when she walked in, she was right.”

Tanveer Hussain actually came with a friend who auditioned – but when Masud saw him thought he was perfect for ‘Baba’.

“I wanted a Nana Patekar (a famous Bollywood actor who exudes sincerity and honesty) Pakistani equivalent. Tanveer Bhai acts a little in the theatre, again, I knew straightaway.”

Masud isn’t mad about the necessary publicity trail for a film and is slightly reluctant to do Q&As and the like, but he realises this film has something important to say about Pakistan and that it could act as an incentive to other aspiring filmmakers from the British Pakistani community.

“People said I should shoot in Morocco or India, but I was adamant it’s got to come out of Pakistan, so that people can be proud of it and so we can put the country on the map for the right reasons.

“I wanted the film to speak for itself, but I do feel a sense of responsibility (to talk about filmmaking) – how many British Pakistani filmmakers are there? It’s just such a shame.

“If we can create a path and leave the door semi-ajar for a kid, say from Bradford, to make a film, then it’s the difference and it helps if we can get audiences in there. It will show cinema owners there is an audience and an appetite for watching films like this.

“If a kid watches it and sees a brown man with a beard showing a film in multiplex – that is a role model I never saw while growing up.”

STOP PRESS: The film has been selected to be Britain’s entry into the Foreign Language category for next year’s Oscars

The film opens tomorrow in selected cinemas across the UK