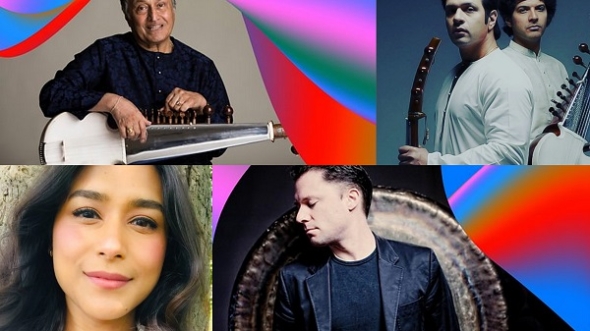 ONE OF THE GREAT events on the classical music calendar in Britain has just begun and there is a South Asian element to look out for – and it’s a big moment for a young presenter.

The Proms are described as the world’s largest classical musical festival. It all kicked off on July 15 and ends on September 10 and mostly it is hosted at the Royal Albert Hall in west London. Much of it too can be seen recorded (with a few live concerts) on the BBC (in the UK only – see link below).

Perhaps most significantly Amjad Ali Khan, widely regarded as one of the greatest sarod players of his generation, is joined by sons Amaan & Ayaan for a special morning concert on Sunday, August 21 as part of The BBC Proms.

We have an interview with Amaan and Ayaan, where they talk about their excitement about playing at the Royal Albert Hall (Rah) for the first time and what it means for the them to make their proms debut as a trio with their illustrious father. They both are stars in their own right. That interview should be out in early August. (For concert link, see below).

Taking place tomorrow (Saturday, July 23) is the CBeebies Prom – yes, a classical concert for children taking place at the Rah in the morning as part of the Proms. The same show is repeated in an afternoon performance too.

One of several presenters on the day is Puja Panchkoty – who has been one of the mainstays of the CBeebies series, ‘Andy’s Adventures’.

She plays one of Andy Day’s regular sidekicks – scientist ‘Jen’ who is Andy’s assistant.

Panchkoty spoke to www.asianculturevulture.com about her excitement presenting this concert – it will be her debut at the Rah.

“It’s been put together in the most wonderful way and Andy is one of the other presenters too.

“It’s for young viewers and will be themed around the environment and very immersive.”

It is Prom 12 and is titled an ‘Ocean Adventure’ and is an hour-long show and includes a world premiere of a new ‘Whalesong’ by Mason Bates and there will be plenty of lively, engaging tracks.

“It will be about finding animals, and there’s a strong message about the environment. It’s the first time I’m appearing at the Rah. I am a very small part of a big jigsaw and this is something much bigger than myself – you might be slightly nervous about it, but it’s also exciting – you want to do your best and get the message across, I am really looking forward to it and being part of the wonderful team,” she told acv ahead of the rehearsal period.

Growing up in Glasgow, the Scot is a media studies graduate from Stirling University, and actually started professionally on CBeebies when she was 16 in a drama.

“I loved it and then doing a degree was kind of a way of finding peace with my ambition to act and doing something fairly academic, while still being interested in acting.”

Since graduating, she’s featured in a few TV and film roles and is an established presence on ‘Andy’s Adventures’.

“Jen’s a great character, she’s very tech savvy and I have a lot of Mums and Dads who say their children can relate to Jen.”

She enjoyed drama at school and did a lot of theatre when she was young – presenting and working with children now is something she relishes.

“Acting and presenting are not that different, and embodying a person and delivering a message is about playing a character, I am never closed to opportunities to flexing that muscle,” she said about work beyond CBeebies.