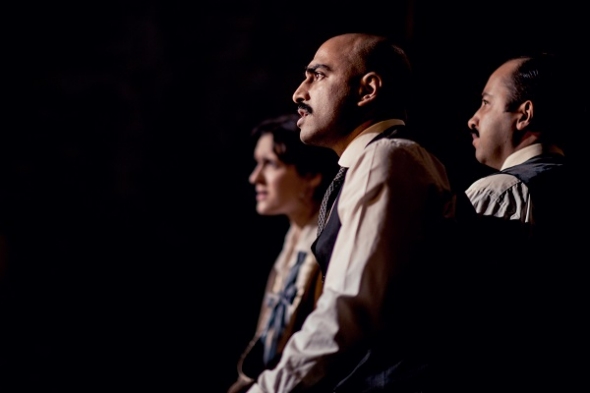 AS A WORK, ‘A Passage to India’ continues to enthrall because of the strength of the characters and the situations EM Forster puts them in – in the India of the early 20th century British Raj.

The latest stage adaptation by Simon Dormandy and directed by Dormandy and Sebastian Armesto, and currently ending its UK run at the Park Theatre in North London is perhaps more Indian in character than others.

There is some singing and dancing – well dancing may not be quite the right word – but movement all the same.

There’s an arresting start and the drama is punctuated by a couple of these scenes where there is a form of ensemble movement.

Asif Khan’s ‘Dr Aziz’ is both charming and slightly awkward and gauche. Forster’s innate sympathy is beautifully portrayed, but Khan gives it a more distinct and even cutting, edge. Proud, intelligent, cultured and learned, Dr Aziz is affronted by the casual and formal racism which is the Raj’s stock in trade – he reacts in a way that his critics would dismiss as a man with ‘a big chip on his shoulders’.

As well he might, Forster suggests – but how far are the British, as arbitrators and dispensers of justice, willing to go? Forster concludes, not very.

While Dr Aziz’s friendship with Fielding (Richard Goulding) is thoroughly tested and seen to be so – the more intriguing potential romance between Adela (Phoebe Pryce) is a little under explored (but perhaps David Lean’s 1984 film version over-plays it).

Impressionistic and somewhat seduced by India itself, Adela yearns for something passionate and all-consuming, but finds the diffidence of the English men immediately around her, unappealing and uninspiring. Yet, of course, what she might countenance in her imagination cannot be actualised in reality and forms the dramatic ambiguity that gives this work its continuing resonance.

This is an imaginative production and the live and original music by Kuljit Bhamra give it further weight and power. We might not be able to rewrite history (wholly) but novels like Forster’s and productions like these with characters such as Dr Aziz, show surely that some aspects of a colonial mentality remain and still need to be tackled. (Sailesh Ram)