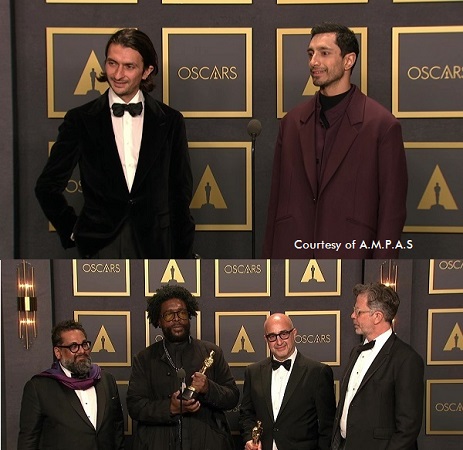 RIZ AHMED AND ANEIL KARIA have done it!

Their short live action film about an apocalyptic scary future has won them an Oscar.

The well-known actor who already has an Emmy for his role in the US drama, ‘The Night of’ (2016) now has an Oscar and Karia, who has made one award-winning feature with Ben Whishaw, ‘Surge’ (2019) are holding the coveted statuette – their first reaction to the Academy about their award – was that it was “nice”. (See the video below).

In the press room after the awards last night, Karia initially described it the Oscar as “mad”, while Ahmed in response to a question about what it meant for South Asian stories, said: “I think it’s really important to tell all kinds of stories, stories about joy, stories about suffering, and about all types of people.

“That’s really the point of what we are doing here as storytellers. You know, a story is a place where you can imagine yourself into someone else’s experience, and by doing that it increases your empathy. It opens your heart and your mind, and it broadens your horizons about who you can relate to and how we are all the same.”

Karia said at the start: “It’s just something we never expected and to end up here is insane, to be honest.”

www.asianculturevulture.com has been following this film since it first came out in April 2020 on the creative platform We Present and on Ahmed’s YouTube Channel, in lockdown, when he was in a spurt of creativity, releasing his album of the same name and then again more recently when the film featured on an Oscars longlist last year and acv was invited to watch the film on the big screen at the W Hotel In London and see a short post screening Q&A with Ahmed & Karia talking to Mark Keromode, BBC film critic and one of Britain’s best known reviewers.

We later talked to Karia about the making of ‘The Long Goodbye’ and his career to date (See link below). He first met Ahmed through director Yann Demange, who like Karia, had directed episodes of the popular and critically acclaimed Sky series, ‘Top Boy’. The two got on and agreed to work together and talking to Kermode disclosed that they egged each other on to make the film as impactful as possible.

It starts with Ahmed’ s character being put through his dance paces by a young cousin and then squabbling with others in the house as they clearly prep for a family wedding – but the celebratory atmosphere changes when masked men enter their street and then start rounding up all the brown men – not just from that house but the whole road. The climax is brutal but ends with Ahmed somehow managing what could be a dying but compelling soliloquy.

Both have talked about the film being about a nightmare scenario but Ahmed last night in the press room reminded everyone that the film was about joy too – it starts very gently, comically and anyone can relate to the family scenes.

Ahmed said: “In a time when lots of migrants, refugees, and immigrants are being dehumanised, I think it’s really important to tell stories that change that.

“And what we’ve tried to do with our film is, yeah, show the challenges, the dangers of where we might be headed, but it’s also to celebrate the joy and the community of the immigrant family at the heart of this story.”

It sounds like the two will be working together after this success – both expressed a desire to and Karia expanded on this in our interview in December.

Last night, Ahmed said: “So we will continue telling stories that complicate and elevate our experience on screen so people can really empathise.”

Karia again explained that the film had come from a conversation and dialogue and that it was very much a product of the pair’s imagination.

“(The win) has really blown our minds. We made it from a really personal place.”

He explained: “It was an exercise in not being kind of strategic about how you develop an idea.”

As in our interview he talked briefly about the process of working with the actors – of letting them improvise and bringing their own interpretation to what was happening.

“It was an exercise about looking inward and wrenching out what’s deep inside them, what you feel like you need to make rather than what you think you should be making,” he said in the post Oscars’ press room.

Ahmed said they only had enough money to make a short at the time – funding came from the We Transfer/ We Present platform.

Karia praised Ahmed for his articulacy – this award and some other categories were pre-recorded but shown live and only Ahmed made a formal acceptance speech.

In this, he said: “In such divided times, we believe the road to story is to remind us there is no us and them. There’s just us. And this, this is for everyone who feels that they don’t belong, anyone who feels that they’re stuck in a no man’s land. You’re not alone. We’ll meet you there. That’s where the future is. Peace.”

Karia’s first reaction showed how far the two had come with this film.

He told the press: “If you could have seen a five-minute snapshot of our shoot, the kind of chaotic, low-flying nature of, you know, of it all, on the cold streets of Leatherhead, quite underwhelming town in England, you can understand why it was a leap to imagine ourselves here today. So, yeah, it’s a mad one. It feels good in conclusion.”

The other South Asian winner on the evening was ‘Summer of Soul’ producer and now Oscar documentary feature winner Joseph Patel who commented on Ahmed and Karia’s win too.

He told the press room: “I am in a room full of journalists, so I have to say this because I would be remiss not to. Riz Ahmed, tonight, became the 9th South Asian ever to win an Academy Award. I became the 10th.

Patel is understood to originate from Baroda in Gujarat and started out as a music and culture journalist and started to produce TV and digital content for MTV News Docs, Vice Media and other outlets and lives in Brooklyn with his wife and dog.

‘Summer of Soul’ is about the Harlem Culture Festival in 1969 and it is described as “part music, part historical record created around an epic event that celebrated black history, culture and fashion”. Director Ahmir ‘Questlove’ Thompson is the co-front front man of the band, The Roots, who are the resident musicians for ‘The Tonight Show with Jimmy Fallon‘ in the US.

The film premiered at the Sundance Film Festival in 2021 and won both the Grand Jury Prize and the Audience Award there. Patel, Thompson and producer Robert Fyvolent also have a Bafta for ‘Summer of Soul’.

Among the films that did well across the board were ‘Dune’.

The film has a South Asian connection in that the company, Dneg, owned by Indian Namit Malhotra, helped to bring the director’s vision to the big screen.

Malhotra spoke to acv on Saturday (March 26) and said that ‘Dune’ would come to represent a cinematic watershed and you would be able to tell what kind of film had been made before ‘Dune’ and what had come out after it.

We will have more on Malhotra, who started out with just three people and a company called Prime Focus in India, and Dneg later, ahead of the Bollywood release, ‘Brahmāstra’, scheduled to release in September.

Among the other notable wins were indie film ‘Coda’ which won the Best Picture award. It is about a young girl who loves to sing but has deaf parents. Welsh Emilia Jones plays the lead character. Adapted from the French film, ‘La Famille Bélier’ and directed by Sian Heder, it also won Troy Kotsur an award for Best Supporting Actor, to add to his Bafta. Heder also won in the Best Adapted Screenplay.

Ariane DeBose won for Best Supporting Actress in ‘West Side Story’, while Will Smith won Best Actor for ‘King Richard’ and Jane Campion, the Best Director Oscar for ‘The Power of the Dog‘.

Smith’s win has been overshadowed by the controversy of him striking comedian Chris Rock across the face after he made a joke about Smith’s wife Jade Pinkett Smith having short hair, when it is widely known that she suffers from alopecia.

There was disappointment for several other South Asian nominees but at least they were able to get together and network at a party hosted by star Priyanka Chopra and others just ahead of the ceremony itself. (See below for list and details of the Chopra’s post publicising the gathering).

Privacy & Cookies: This site uses cookies. By continuing to use this website, you agree to their use.
To find out more, including how to control cookies, see here: Cookie Policy
← Film festival bird bites: ‘A Night of Knowing Nothing’ Toronto award, ‘Paka’; Satyajit Ray London weekend; ‘Invisible Demons’ capital to capital -TIFF, LIFF and LFF…
‘Avijatrik’ (‘The Wanderlust of Apu’) – new follow-on film to Satyajit Ray’s ‘Apur Sansar’ (‘The World of Apu’) comes to England for the first time… →