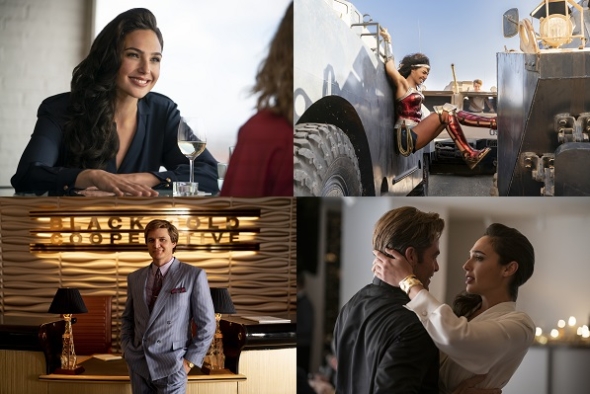 Warner Brothers blockbuster is available in cinemas now (in the UK)…

OUR CURRENT incumbent of the White House might recognise a bit of himself in the character of ‘Maxwell Lord’ (Pedro Pascal) in director Patty Jenkin’s new – ‘Wonder Woman 1984’.

Of course any resemblance to POTUS is purely a matter of interpretation or coincidence – you naughty person, you!

And well, that is damning – after all who likes losers – as a line in the film goes…haha.

More seriously, this blockbuster – postponed from an original summer release – is be available in some cinemas in the UK, where restrictions will allow, from today (December 16).

This is Gal Gadot’s movie through and through – she also takes an executive producer credit as well – and if you like her, you will like this film – both as Wonder Woman herself and Diana Prince, the rather more modest anthropologist and archaeologist, employed at the Smithsonian in Washington – one of the world’s most prestigious museums.

An ancient and mysterious gemstone lands up at the Smithsonian – Barbara Minerva (Kristen Wiig), a new recruit is tasked with looking after it and helping the FBI following a bungled heist – in steps Lord as a benefactor who covets the stone, while Diana (Gadot) only latterly realises its significance to her. That is the plot, crudely speaking.

Is it worth it making a trip to the cinema for?

Yes, if you like a blockbuster with some emotional pull, humour, nostalgia and decent quotient of narrative engagement, and special effects – at least at the beginning.

The childhood Diana (played by Lilly Aspell) scenes of mythical Greece (the DC Comic fictional island of Themyscira) are enchanting and spectacular – especially in IMAX – how we saw this film and the early foiled gem heist – where Wonder Woman reveals herself in 1984 – is well done as well.

However – don’t be too taken in by the feminist angle – the women are almost all unspeakably glamorous and beautiful – even Wiig who is presented as a rather dowdy, gawky gemologist needs only a change of clothes and slight attitude shift to morph into 1980s power babe.

The story itself isn’t anything spectacular – the ancient and mysterious gem lies at the heart of the drama and strange-goings on, as the world stands on the precipice of an apocalypse, engineered by the villainous, power-mad Lord.

He is a very memorable character because he seems so much like Donald Trump (haha, sorry…) – a passion for TV, slimy and insecure, but fabulously wealthy (seemingly), and desperate for a world not just to like him, but love him.

The only element that keeps him grounded is his seven-year-old son Alistair (Lucian Perez) whom he has access to – Lord has split from his wife, but she is nowhere to be seen in this.

There is no clear time travel as such but the plot around Pine’s character is not well delineated in this regard – or at least not for this reviewer. Critics and film fans have speculated as to why 1984 was chosen – director Jenkins, who directed the original 2017 smash ‘Wonder Woman’ says this is the time when ‘Wonder Woman’ (the original Lynda Carter) was it heights – fair enough, still seems a bit tenuous, but it adds a fun element to the proceedings with all the clothes.

The special effects are decent enough – the opening in Themyscira is very strong in that – set as it is in Diana Prince’s childhood of the Amazons, where there are only women – again all tall and toned and almost criminally, physically impeccable. It’s Hollywood – but there is a good, deeper origins story, in Themyscira, to be had sometime in this evolving franchise.

While ‘Wonder Woman 1984’ is a good tale and decently told with some nods to contemporary events and characters – and notions and ideas about what is truth, it doesn’t really get above this to be anything more than a very watchable and enjoyable blockbuster, if that is your seasonal bag.

And while watching on a smaller screen may not be quite the experience this film should be, there is enough going on for it to be an enjoyable couple of hours or so to view digitally.

Lastly and a little inconsequentially, there is also a cameo for Asim Chaudhry (aka ‘Chabuddy G’) as as Barbara and Diana museum colleague ‘Roger’ – Hollywood watch out! But blink and you will miss him.

The film is out on general cinema release in the UK now and will be available in the US on Christmas Day in selected theatres and HBO. It should be available in India from December 25 too. In the UK, it may become available on streaming but there is nothing offical on this yet.