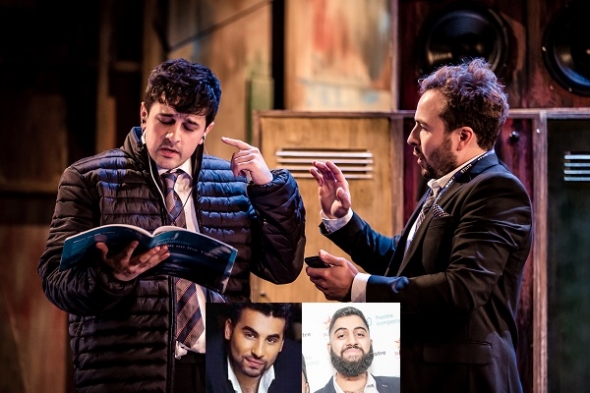 IN 2013, the documentary of a boy with a stammer warmed the nation’s hearts in ‘Educating Yorkshire’.
Musharaf Asghar, known as ‘Mushy’, was one of the pupils featured in the Channel 4 programme about a secondary school in Dewsbury, Yorkshire, and was shown struggling with his stammer and getting very down about it.
Then in the finale, it all came together after weeks of coaching and practice and help from friends, family and teachers, particularly Matt Burton, he was able to overcome his stammer and addressed a school assembly – and won the hearts of a nation – the particular clip went viral and ever since Mushy has become of a something of a celebrity and now gives motivational speeches – but the story behind that story is far less well known…
The programme provided the basis of a very successful musical, ‘Mushy: Lyrically Speaking’ which was staged last year and was the subject of rave reviews – and now tomorrow, there’s a chance of seeing the production on the web from 7.30pm tomorrow (Friday, February 7 – see the line below).
What many people don’t realise is that the play goes deeper and looks at problems Mushy had after the success of the TV programme; and being a musical, it has rap and grime in it.
ACV met the well-known film and TV actor Ameet Chana to talk about his first time as a director on this production.
It was created by the Rifco Theatre company, based in Watford and whose creative director is Pravesh Kumar. ACV saw the production when it was staged in Slough on tour late last year. Kumar wrote the book, which is the term for the narrative structure of the drama, encompassing the plot. The music was composed by well-known artist Niraj Chag and famous British rapper, Raxstar wrote the lyrics for the rap songs in ‘Mushy – Lyrically speaking’. There are three actors who play all the characters and the three are Varun Raj (‘Mushy’); Oliver Longstaff (Mr Burton) and Medhavi Patel (‘Ammi’).

www.asianculturevulture.com (ACV): The play has a very big heart – what drew you to it and how did you come to be the director?

Ameet Chana (AC): I was appointed associate director of Rifco in October 2018 and within weeks we had a conversation about ‘what are you going to direct…?’ I was handling the associates programme and the digital arm of Rifco and then Pravesh said he had seen this documentary, ‘Educating Yorkshire’. He had spoken to Mushy, and told me he was on board. There’s this voice of a young British Asian who has something to overcome. We spent hours talking to him and filming interviews and we walked away – thinking there’s a story to tell here and it’s not the story everyone knows.

ACV: Can you explain how the headphones helped Mushy?

AC: If you remember there is the film, ‘The King’s Speech’ (in this 2010 film, King George VI overcomes his stammer to speak to the nation in 1936 and is based on real events at the time) and the King uses these headphones and having seen ‘The King’s Speech’ the night before, Mushy thought he’d give it a go.
But in that one moment the nation fell in love with him (overcoming his stammer) and also thought that this kid was cured in that one momentary thing. It was quite the opposite. He became quite insular and closed himself off, because he didn’t want to come across as a liar or a fake to the country. And he sort of stopped going out and started rehabilitating himself in his bedroom and phoning these call centres.

AC: I thought that was a great angle of a story – this nation’s sweetheart, but he’s sat in his bedroom phoning Vodafone and O2 (and other mobile operators) because he found out from somewhere they are not allowed to put the phone down on callers.

ACV: So, he’s trying to learn by speaking…?

AC: He used to sit there for hours talking to 02 and EE (and others) about getting a new phone, but he didn’t buy any.

ACV: How did the musical element come into it?

AC: The music angle came from him – when I first met him, I did a 20-questions quick fire thing with him. And one of these questions I asked was, ‘what kind of music do you listen to? He said: Rap and grime’.

ACV: Did he tell you why liked that music more than other genres?

AC: Yes, it was because he was able to learn the lyrics and listen to them on his headphones and recite them back without stammering.

ACV: How did he react when he first saw the play?

AC: Genuinely, he was emotionally speechless, he brought his mum and his family, his cousins and brothers to the opening night at Watford and he couldn’t have been more moved by it. ‘He said: I can’t believe you’ve taken something that I’ve struggled with all my life and turned it into a kind of a hopeful story, and that too, a rap musical’.

ACV: How much is this story real and how much is fictional? There’s an announcement at the beginning which says some things have been changed for dramatic effect, can you explain that a little please?

AC: It’s Mushy, that’s the real Mushy in his own voice. Ultimately, you have to remember we are putting on a piece of theatre and there is drama. When you meet people at an interview, they will give you hints of something but they won’t be a hundred per cent straight with you.

ACV: What was going on, then?

AC: Quite a bit, but you will have to see ‘Mushy – Lyrically speaking’ to find out…

Privacy & Cookies: This site uses cookies. By continuing to use this website, you agree to their use.
To find out more, including how to control cookies, see here: Cookie Policy
← ‘Jallikattu’ wild passions of men and beast, director Lijo Jose Pellissery and actor Santhy Balachandran talk about their film – London Film Festival 2019
‘A Doll’s House’ – powerful and insightful Tanika Gupta adaptation turns Ibsen classic into play about exotica, race and power… →