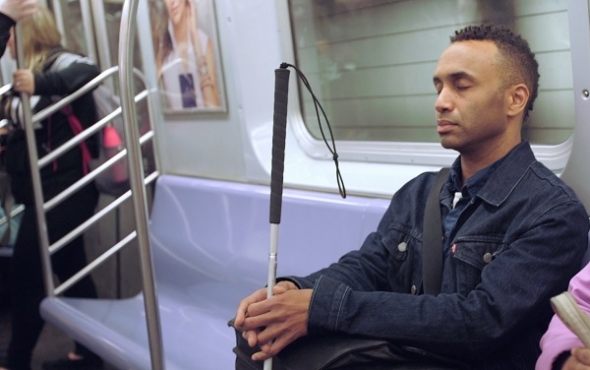 “I’M THE OTHER of the other of the other,” Rodney Evans tells the audience at the International premiere of his documentary ‘Vision Portraits’ which screened at the BFI Flare London LGBTQ+ Film Festival on Saturday (March 23).

Being black, gay and disabled makes him a minority in the film industry he admitted, but he hasn’t let that stop him from following his filmmaker dreams.

‘Vision Portraits’ is Evan’s reflections on how he continues to be a filmmaker despite only having 8 per cent functioning eyesight. His emotional story is interwoven with three other remarkable individuals who also suffer from sight loss, but who continue to lead creative careers.

A raw, tender and sensitive film from the start, we’re introduced to their many challenges and achievements which makes for compelling viewing.

Photographer John Dugdale, Dancer Kayla Hamilton and writer Ryan Knighton all recall anecdotes of how they developed their sight problems and how they’ve come to terms with it.

Dugdale lost his sight at the age of 30 following a stroke. One of his most revealing observations is when he speaks about the colours he can see in his mind, which are similar to the ever-changing nature of the aurora borealis over the night sky. He also explains the sense of ‘freedom’ that exists when you can’t see.

Rodney too talks about his daily life and recalls an alarming incident when he once fell at a station in the gap between a train and a platform which though traumatic, he recalls with light-hearted commentary.

There are moments of the film that are completely silent, which enhance the sensory experience of watching it. At times there are simply words on the screen reflecting the feelings of desolation Rodney has from finding himself in a liminal space; not fully blind and not sighted either.

Making the film however, helped him realise that if one day he is fully blind, it’s not the end.

He summed up: “We live in a culture that’s so much about branding and self-promotion and if you come out as a filmmaker that’s visually impaired it’s another strike against you.

“I was wary of doing this and coming clean about my truth of who I am and what my abilities are, but it was amazing to meet these artists that were making this mind-blowing work and the ways that they were approaching it with such courage and bravery and fearlessness – it lit a fire under me and made me feel like the possibilities are wide open.”

‘Vision Portraits’ is a film that will challenge any perceptions you have about sight and loss of sight and what it means to be a creative.

It’s a balanced, well-paced and beautifully edited documentary that puts disability and minority voices in the spotlight; but that’s not the reason it will be remembered.

The film’s greatest strengths lie in its honesty and vulnerability: two traits that many documentary makers attempt to achieve but in reality find it hard to do, Rodney Evans on the other hand has just proved himself to be the master of it.

*Poonam Brah’s short film, ‘Home Girl’ also screened at BFI Flare. Part of a set of seven short films that screened on Sunday as part of the ‘Calm inside the storm’ billing, it looks at the choices facing ‘Roya’ (Ayesha Kala) when her mother dies.

Written by Iman Qureshi and developed by Film London, it’s a tale of romance and hope…

Both films screened at BFI Flare London LGBTQ+ Film Festival which started on Thursday (March 21) and runs at the BFI until Sunday (March 31). The programme includes feature films, documentaries and shorts that celebrate sexual and gender diversity from around the world. Check out the full programme at www.bfi.org.uk/flare