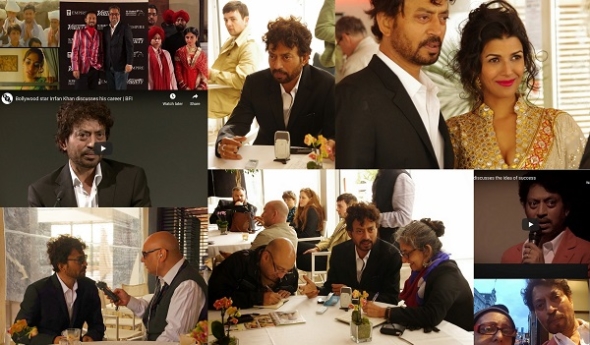 IRRFAN KHAN first came to www.asianculturevulture.com‘s attention in 2013 at the Cannes Film Festival as both he and co-star Nimrat Kaur were there for the world premiere of their film, ‘The Lunchbox’.

ACV editor Sailesh Ram and contributing editor Suman Bhuchar interviewed him. Khan explained to acv why he had a producer credit on the film, saying he believed in the project and its international appeal. That interview is here.

Kaur can be seen in the current (for UK audiences) global hit series of ‘Homeland’ and was slightly in awe of Khan back then and clearly respected his achievements as an actor – she herself was making the transition from independent cinema to mainstream Hindi cinema – or Bollywood as it better known – and has established herself internationally now. Acv interview’s with Kaur about ‘The Lunchbox’ is here.

Nawazuddin Siddiqui, another co-star of ‘The Lunchbox’ paid tribute in the Indian media and said there was no ‘feud’ between him and Khan. They were friends and Siddiqui looked up to Khan and saw him as a much-valued mentor. In fact he had first acted for him in a film Khan had directed in 2000. (See link below for more).

Journalist Rakesh Mathur, reporting for Resonance FM programme, ‘Sanskriti’, was also there and recalls the encounter with the actor. “I asked Irrfan Khan what kind of difference he felt between working for the Indian directors and the international directors?”

He replied: “Each film is a creation of a director’s imagination. An actor has to understand that creation and help build this world of dreams. That’s what I try to do in any film. Yes, the international cinema provides new opportunities of doing things differently.”

Many first came to know of his talent in his wonderful and mesmerising performance in Asif Kapadia’s ‘The Warrior’ (2001) which won the BAFTA for Best British Film.

Kapadia tweeted with the simple but emotional – “Love you Irrfan bhai” and later wrote about his relationship with Khan (see link below), saying there were like brothers and that when he had come to cast, most of the Mumbai actors he had auditioned for his low budget feature – with little dialogue and influenced by the sparse style of directors Robert Bresson and Sergio Leone – were “clueless”. Not Khan. And so began a 21-year-long close friendship.

The two shared a fabulous conversation at the BFI Southbank in July 2013 as part of the London Indian Film Festival. ACV still remembers it as one of the outstanding talks that it has had the privilege of attending. It seems outrageous that not more people have seen this and listened to Khan in his own words and tell us about his evolution as an actor and as a man. You can watch the talk below.

Not too long after ‘The Warrior’ came ‘The Namesake’ (2006) directed by Mira Nair and based on Jhumpa Lahiri’s Pulitzer prize-winning novel of the same name – with the film scripted by long-time Nair collaborator and scriptwriter Sooni Taraporevala. The music for that film was scored by Nitin Sawhney, who paid his own emotional tribute to Khan this week too.

In 2007, Khan made ‘The Mighty Heart’ a film by British director Michael Winterbottom about the kidnap and murder of US Journalist Daniel Pearl. Angelina Jolie played Marianne Pearl, and Irfan Khan (as he was known then) played ‘The Captain’ – the chief of police investigating the case. Jolie who played Pearl’s widow, issued a statement, saying he had been a pleasure to work with and she remembered the “intensity of his commitment, and equally his smile”.

British Pakistani documentary director Ahmed Jamal, particularly recalls, Khan’s thrill at having an Armani designed suit to wear at the Red Carpet premiere of the film in Cannes that year. Jamal was a consultant to the film and had made an award-winning documentary about Pearl’s murder.

Then there was also the film, ‘Partition’ (2007) by Canadian Vic Sarin alongside the popular Jimi Mistry (perhaps best-known for ‘Coronation Street’ and ‘East is East’).

In the same year, out came ‘The Darjeeling Limited’ – directed by the American Wes Anderson. He said he wrote a part specially for Khan because he wanted to work with him!

British actor Amara Karan was one of the stars of the film. She told acv: “This was my first role after drama school and I was absolutely overwhelmed and honoured to be working with Irfan Khan.
“He was a magnetic presence. He doesn’t say anything on screen. Such a unique talent, so sexy. We didn’t have any scenes together in the film together but I am a huge fan of his work. Such a rare actor.”

In 2008 there was ‘Slumdog Millionaire’ – and director Danny Boyle paid fulsome tribute to Khan’s input in the film for the BBC. (See the link below). Other stars’ tributes are covered on that page too.

Khan brought an incredible gravitas to the closing scenes of Ang Lee’s 2012 ‘Life of Pi’ (adapted from Yann Martel’s Booker Prize-winning novel of same title). Lee paid tribute to Khan, speaking to Variety, said: “Irrfan was a great artist, a true gentleman and a brave fighter. His passing away is cinema’s loss. We will miss him dearly. May you Rest in Peace my dear friend.” (See the link below for more on this.)

Anup Singh directed Khan in the film, ‘Qissa: The Tale of the Lonely Ghost’ (2013) and ‘The Song of Scorpions’ (2017). He shared his memories of working with the actor and some pictures from his personal album, with us.

“Irrfan Khan had seen my film ‘The Name of the River’ (‘Ekti Nodir Naam’, 2003) and had liked it, so when I approached him to work with me, he remembered the film and there was some trust between us already.” (Both artists also studied at the National School of Drama in Delhi.)

“This depth did not emerge as large gestures or a high tone of voice – it could be a hum or a blink or a simple shift of the head – these nuances deeply connected to how he was growing as a person.”

Anup Singh then goes on to illustrate what he means by explaining that Irrfan Khan was obsessed with flying kites and during lunch breaks would disappear to do that. “If you wanted to find him you only had to look up to the sky and where there was a kite, there was Khan,” he added. “One day I asked him about his fondness for kites. He explained that you can control kites but it’s one gust of wind that can bring the kite down and he found that acting was also similar. There are things you can control and things that you can’t fathom.”

Sangeeta Datta, writer, director and founder of Baithak UK (a cultural organisation promoting music, art and learning), arranged an evening of Indian Cinema at British Academy of Film & Television Arts (BAFTA) 2017 featuring leading lights of Indian cinema, Javed Aktar, Shabana Azmi and Farhan Akhtar – and Khan attended a guest. Khan addressed the audience and share an onstage conversation with Azmi – In this he talks about “dancing on suffering” and how it changed his perception of making such the film ‘Qissa’.

There is more here.

Datta concluded: “He was always inspiring and honest. In the last two years he said he learnt to discover the magic of life, the essence of the moment. Irrfan fought like a warrior and so did his wife Sutapa (Sikdar). Irrfan’s magnificent work leaves us with indelible moments of great cinema. His filmography needs to be celebrated. He raised the bar in many ways with his craft and his humanity.”

In the UK, the Bagri Foundation London Indian Film Festival paid tribute to him. Founder and director Cary Rajinder Sawhney remembered Khan’s star status in 2013 for LIFF and visiting him to present an Icon Award in 2018 when he was ill.

In October 2018, British actor and dancer, Nisha Aaliya worked with Khan on a TV commercial for Syska (an Indian electrical company) shown only in India. She remembers him joking about the age difference between them and having to play a couple – “‘Beti ki umar ke Saamne mujhe khadha kar diya'”. (‘They have put me in front of someone who could be my daughter’s age’.) But it helped break the ice.
She told acv: “He was an incredible energy to be around; to learn from so early in my career. He asked about my background, my career and my dance. He gave me some valuable advice and encouraged me to go to Mumbai for work. He had the most majestic presence and spoke with a sense of calmness and coolness. He made sure the people around him were comfortable. A huge loss to the world of Cinema. You are and will always be truly inspirational. May your soul Rest in Peace Irrfan Sir 😔.”

British musician Soumik Datta also paid tribute to Khan, inspired by the music of the film, ‘Piku’.
You can view this here.