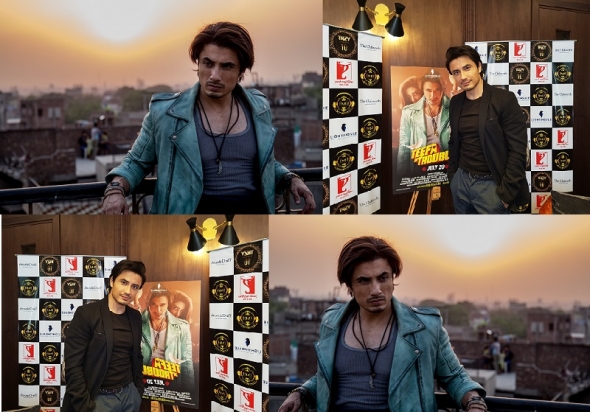 One of only a handful of Pakistani artists to break into Bollywood in a different time, his first homegrown production could really make or break him…

FOR A TIME, model and singer Ali Zafar was smashing it as a Pakistani actor working in Bollywood.

There were seven productions he featured in, with ‘Tera Bin Laden’ (2010) being among the best known, and Zafar had star billing.

He was last seen in Bollywood in the off-beat ‘Dear Zindagi’ (2016) which starred youth icon Alia Bhatt and the seemingly ever-green Shah Rukh Khan.

From tomorrow (July 20), audiences will get a chance to assess Zafar in his first Pakistani feature film.

‘Teefa in Trouble’ hits theatres worldwide and is being distributed in a number of countries (25) by Indian production powerhouse, Yash Raj.

The film not only stars Zafar – he is responsible for the story and this is his first production under his own production outfit, Lightingale Productions.

He told www.asianculturevulture.com that ‘Teefa in Trouble’ is just the sort of film he wants to see and he believes it makes a statement about Pakistani cinema.

“Audiences want to be entertained,” he declared. “And we’ve made this film the way we wanted to make it.”

It’s clearly aimed at being a mass crowd pleaser – the ‘Teefa’ of the title is ‘Latif’, played by Zafar and he’s a lovable rogue figure who works for a Lahori gangster.

His mission in the film is to kidnap ‘Anya’ (Maya Ali) and bring her to Lahore from Poland where her father is also a goonish villain.

Ali told www.asianculturevulture.com:“Teefa does a lot of stuff in the film, from very hard core Kung Fu martial arts action to songs and he’s also a funny guy.

“People will see a very different side of me, and appreciate the nuances, it’s not just a comedy, not just an action movie, not just a romance.”

He believes that ‘Teefa in Trouble’ will lay down a marker internationally for Pakistani films and their development.

Since the effective ban on Pakistani actors working in Indian cinema since September 2016, more homegrown work is being made in Pakistan itself.

Zafar told us: “There is something of a revival in Pakistani cinema and I think to resurrect the industry profoundly (in Pakistan) and internationally, we need to make something like ‘Teefa in Trouble’.”

Maya Ali and Ali Zafar in ‘Teefa in Trouble’

That he has got Yash Raj Films on board is a considerable coup. The prolific Bollywood outfit produced ‘Kill Dil’ (2012) in which Zafar was paired with the (then) rising now very much established star, Ranveer Singh.

“Yash Raj loved it when they saw ‘Teefa in Trouble’.

“I share an old bond with them. It’s a relationship based on mutual respect and admiration, I believe.”

Zafar trained specifically for his role.

“There were months and months of training and physical endurance work and I learned fighting techniques – a lot went into the preparation of this character.”

He wants it to look as good as anything Hollywood or Bollywood is doing right now.

“It had to look authentic and I’ve done all the stunts, barring a few which the director (Ashan Rahim) forbade me to do.”

Zafar and Rahim made music videos together and are long-time collaborators. The story came from the two chatting casually at an eatery back home.

Maya Ali in ‘Teefa in Trouble’

“It was a very strange moment,” Ali recalled. “We were eating some very desi, spicy food in Lahore and the story came to me and I started discussing it with Ashan and he got very excited and we both kept developing the idea.”

Ali said that he has always been interested in the filmmaking process and was a student of plot and screenplays from the time he was first working in Bollywood.

He now wants to take his success from that time and put it back into Pakistani cinema.

“I feel I’ve got a responsibility from my experience and learning so much about movies in Bollywood – which is perhaps the biggest movie industry in the world (it is in terms of the number of productions evrey year) and apply that knowledge to create a film which contributes to the revival of cinema in Pakistan and raises the bar. In terms of content and entertainment, I want large numbers of people to see it and make it a commercial success.”

That ambition might be thwarted by some continuing personal controversy.

Some have called for a boycott of the film in Pakistan itself – in support of singer Meesha shafi who has made sexual harassment allegations against Zafar.

He has denied wrongdoing and has filed a legal case of defamation against Shafi in Pakistan and says he is very confident of being cleared. His wife Ayesha and co-star Ali continue to support him.

In London last week to promote ‘Teefa in Trouble’, he stuck to talking about the film only.

Zafar Ali tells us why you should see ‘Teefa in Trouble’

Privacy & Cookies: This site uses cookies. By continuing to use this website, you agree to their use.
To find out more, including how to control cookies, see here: Cookie Policy
← London Film Festival 2021 (video): ‘7 Days’ – The power of comedy during covid: Roshan Sethi and Karan Soni about their unusual romcom…
ACV Bird Eye Review Show (video) – Episode 18: ‘Ankahi Kahaniya’; ‘House of Secrets – the Burari Deaths’; ‘Tabbar’ (Pavan Malhotra) chat… →