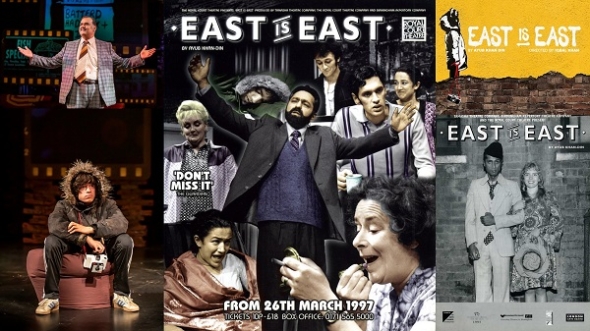 This play celebrates 25 years with a new production that has just opened at the National Theatre in London after premiering in Birmingham last month. Suman Bhuchar, acv associate editor, was there from right from the start…

IT’S HARD to believe that it’s been 25 years since the play, ‘East is East’ was presented to British audiences, and in this piece, I want to share some background on how it happened and some personal reflections from the creative team behind the original show.*

In 1996, I was working with Tamasha Theatre Company, then headed by two artists and friends, Kristine Landon-Smith and Sudha Bhuchar who had set up the company in 1989 in order to bring ‘Asian stories on stage’, while I undertook the press and marketing for the company, which meant promoting the work and encouraging British Asian audiences to come to the theatre.

By 1996, Tamasha had produced several successful plays, ‘Untouchable’ (1989) , based on the book by Mulk Raj Anand about the day in the life of a ‘dalit’ boy and performed alternately in Hindi and English; ‘House of the Sun’ (1991) based on the novel by Meira Chand about Sindhi migrants living in a block of flats in Bombay (as Mumbai was known in those days); ‘Women of the Dust’ (1993) developed from research and written by Ruth Carter on the lives of the itinerant women labourers working on construction sites in Delhi; ‘A Shaft of Sunlight’ (1994) by Abhijat Joshi (now a successful screenwriter in Mumbai) on the communal conflicts in India and ‘A Yearning’ (1995) inspired by Federico Garcia Lorca’s ‘Yerma’. (You can read more on these plays in Tamasha Theatre Company’s website, projects archive section – see the link below).

And, due to all my marketing and audience development work, the company was known to Asian audiences.

So, in 1996, Tamasha undertook a writers’ workshop in collaboration with the Royal Court and supported by the London Arts Board and The Peggy Ramsay foundation and ‘East is East’ was one of the stories to come out of that workshop.

As the company directors, said at the time in the original programme of the show: “This is the first play to be produced on the British stage that really gets under the skin of what it is to be of mixed race origin within the Asian community, growing up in a culture that is predominantly working class British. It is a complex subject and perceptions of what it means are often far from the truth. Both worlds inevitably influence the characters in the play.”

The work went on to be produced with the Birmingham Rep as a small-scale show in The Studio, with the first preview on October 8, 1996 (running till October 26 that year).

Immediately after the show, the then artistic director, Bill Alexander came up to me and said: “You have a hit on your hands.”

At the time, Ayub Khan Din was known as an actor and his autobiographical story of growing up in 1970s Salford, part of a mixed race family, struck a chord with audiences.

The original publicity material described the show as “George Khan an early immigrant to Britain marries a local girl, and together they run a fish and chip shop assisted reluctantly by their six children. The story centres around 12 year old Sajid and his rite of passage from shy boy to teenager…”.

The play went on to be performed at Crucible Studios, Sheffield from October 29 to November 2, then at the Ben Kingsley Theatre, Pendleton College, Salford from 13 to November 16 – in the writer’s own home town; at the Royal Court Theatre Upstairs (formerly the Ambassador’s Theatre from November 19 to December 7) and then the Bristol Old Vic Studio from December 10 – 14 in its original small scale incarnation.

The original run sold out very quickly as ‘word of mouth’ on the show was so positive, and as Sudha Bhuchar explained, it cried out for a future life on the big stage.

“The indomitable Philip Headley, artistic director of Theatre Royal Stratford East (who had partnered Tamasha on our production of ‘House of the Sun’) invited us over for a memorable coffee at his flat.

He and I did the sums on the back of an envelope and shook on the deal.”

‘East is East’ transferred to the Theatre Royal Stratford East in February 1997 and onto the Duke of York’s in April, (the Royal Court’s main stage venue at the time) where we celebrated its 100th performance on April 9th and the show sold out for months. The rest as they say is history.