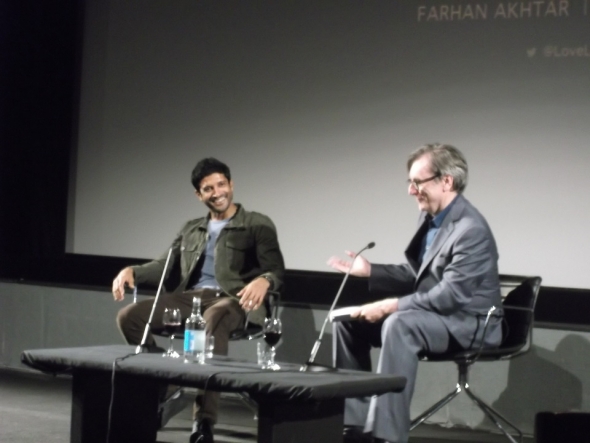 DIRECTOR, screenwriter and star of the film “Bhaag Milkha Bhaag”, Farhan Akhtar has called upon Indian filmmakers to show more courage and be bolder in bringing taboo topics to the big screen.

He also said that he does not see the crop of new films emerging from India as ‘parallel cinema’ or ‘new wave’.

Speaking to Nick James, the editor of UK film aficionado magazine, “Sight & Sound” at a screen talk at the British Film Institute (BFI) Southbank, as part of the London Indian Film Festival (July 10-17), Akhtar said the better quality of Bollywood films shouldn’t be seen as a radical departure from the past.

But most of all, it is courage he wants Indian filmmakers to possess and exhibit.

“Courage is the most important thing that filmmakers and writers need to have,” he said last Wednesday (July 16) near the end of this 90-minute talk. “We do all try our best, (but) there’s also a kind of very strange system we work in – of censorship, of not thinking about certain things as topics for film.

“It’s a thought that goes: ‘Our film may not get a release, so let’s not bother’. Filmmakers need to show a lot more courage.”

Akhtar is among a handful of filmmakers credited with bringing a new sensibility to Bollywood, creating more realistic and engaging storylines and taking more chances on challenging audiences as a director, producer, writer and actor.

Asked by a member of the audience about the state of Indian filmmaking and how he viewed it, he responded: “I don’t feel the need to call anything parallel cinema or new wave.

“It’s becoming more and more mainstream, and there is an emergence of new talent and their influences are from all over the world. The exposure (to other films and cultures) is just so much more.

“They (new filmmakers) want to tell stories that are more in tune with who they are – as opposed to what it is people want to see.

“It’s been happening for a while, it’s going to get even more powerful as a voice, the young filmmaker voice, telling his or her story. That’s where I see a change.”

Akhtar has a wide-ranging and very diverse portfolio of work.

He announced himself as a director with the film “Dil Chatha Hai” in 2001, but before that had worked as song lyricist and assistant director and hails from a filmmaking family.

His father Javed is one of India’s most high profile public figures and is a poet, screenwriter and lyricist. His mother Irani is a director and actor.

He delighted the audience at the BFI Southbank, causing quite a stir and hugged a two-year-old girl and another fan on the stage and revealed many things about the twists and turns of his unusual career and what it was like working with such stars as Shah Rukh Khan.

You can read that story HERE

Main picture: Farhan Akhtar and Nick James at the BFI