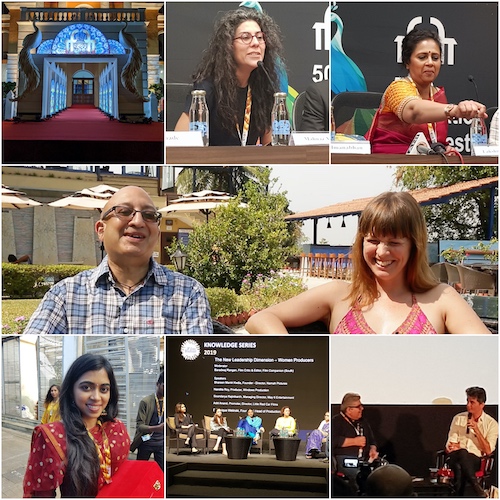 🖥 Interview with Mahnaz Mohammadi, director of ‘Son-Mother’ which featured in the international competition section at IFFI 50. Mohammadi is one of a group of new Iranian directors making a mark on the world stage. A woman who courageously faces obstacles to her craft, she has made a film of insight and power and shines a spotlight on single mothers in Iran, and the plight of children whose education is affected by social issues.

🖥 Interview with Laxmy Ramakrishnan – the director behind ‘House Owner’ – a Tamil language feature which brings home the pain of those who care for loved ones suffering from dementia and associated illnesses. A former army colonel lives in the past – while his wife has to live in the here and now and get them both out of the house, as flood waters threaten their very existence. Based on true events – the Chennai floods of 2015. We speak to director Ramakrishnan, and her husband producer on this film, Gopalakrishnan, and actors Kishore Kumar, a well-established professional in Indian cinema who plays the lead character of the ‘Old Colonel’ and Lovelyn Chandrasekhar, who makes her film debut as the young Radha married to the young soldier who will become a Colonel.

🖥 Vani Tripathi: a powerful voice within the governmen and is also an actor and continues to serve on the Central Board of Film Certification (CBFC) in India. She talked to us about creativity, India’s soft power through films and giving those from small towns and villages the opportunity to make films, harnessing new technology and perhaps giving them a ladder to climb, where nothing exists at present. We first spoke to her in Cannes in 2017.

🖥 Brits at Film Bazaar – we interview several film personalities as they descend on the market section of IFFI – this is where deals are done, and scripts are bought and sold, some first films are developed – and all the business sides of the film industry are catered for – it’s also where film programmers including Samir Bhamra, the creative director of the UK Asian Film Festival sources content for next year’s festival – March 25-April 5 2019. We also catch up with Naman Ramachandran, Variety film journalist and programmer for the London Indian Film Festival in June. He reported on India being close to signing off on an incentivisation scheme for foreign filmmakers to come and shoot in India. It is expected India will offer up to a 30 per cent rebate if filmmakers locate their production in India – and along with the single window clearance system in place, makes the proposition of making films in the country a lot more attractive. He also wrote that the Indian Government is looking to host a culture summit – along the lines of a Davos (where global political and business leaders discuss policy) and bring together creatives in the culture sector with technology specialists. Look out for announcements when these go official…

🎥 Actor Wagner Moura – the star of Netflix series, ‘Narcos’ was undoubtedly one of the stars of the fest. The Brazilian’s first directorial effort, ‘Marighella’ picked up an IFFI accolade and in the masterclass with well-known Indian critic and film journalist, Rajeev Masand, Moura showed he is one of the figures to watch Stateside. Now based in Los Angeles, he talked about taking up the part, gaining weight to play feared and admired drug baron, Pablo Escobar, and shared his thoughts on filmmaking and his opposition to the government of Jair Bolsonaro, the controversial president of Brazil.

🎥 One of the personalities we met at the festival was Mr U Radhakrishnan, who was one of the leading lights behind the running of the Film Society of India, which was originally inspired and founded by the legendary filmmaker Satyajit Ray. Next year IFFI will celebrate Ray’s contribution to Indian cinema. The societies which sprung up around the country screened films that otherwise would not have reached India. “We wanted to see films not as entertainment, but for their artistic value”, Radhakrishnan told www.asianculturevulture.com. A scientist by background and living in Delhi, he hosted one of the daily open forums at IFFI – a quirky feature of the festival where anyone can attend a panel discussion with prominent film figures on a topic pertaining to cinema or associated activities. Radhakrishnan hosted the debate on ‘How real are the reality based feature films?’ Among the panel participants on Tuesday (November 26) was Dan Wolman, an Israeli filmmaker presented with a Lifetime Achievement Award at last year’s IFFI.

Privacy & Cookies: This site uses cookies. By continuing to use this website, you agree to their use.
To find out more, including how to control cookies, see here: Cookie Policy
← Aparna Sen: Sticking to my guns and making the films I wanted to – leading Indian director tells BFI…
Superfan – The Nav Bhatia Story – you cannot help but love this guy! →