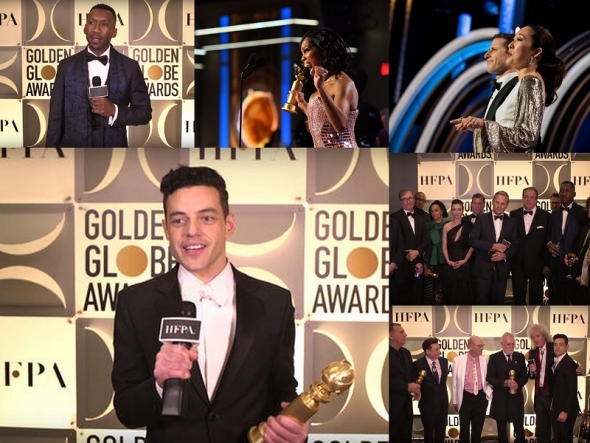 HOLLYWOOD is beginning to embrace diverse talent and give actors from minority communities the recognition they have always deserved – if the Golden Globes are anything to go by last night.

‘Bohemian Rhaspody’ was the big winner on the night, collecting two major awards – including the best picture award in the drama section.

The film is a biopic of the life and times of Freddie Mercury who fronted the hugely successful British band, Queen.

Mercury was born Farrokh Bulsara in Tanzania (Zanzibar) and came from an Indian Parsi (Zoroastrian) family and moved to West London in the 1970s with his parents and sister. The Parsis originally emanated from Iran (ancient Persia) and follow the Zoroastrian faith. They were more or less forced out of Persia when Islam began to spread and dominate the region, and many settled in western India.

Malek, who is of Egyptian heritage, won in the best actor category for a film.

He collected the award in front of Queen band members Roger Taylor and Brian May and they joined for him for pictures with his trophy later and spoke about the film’s triumph.

Malek paid a touching tribute to Freddie Mercury from the winning podium and later said he felt connected to the star who died in 1991 and thought about him every day. (see video below).

There were also major wins for ‘Green Book’ – a film about a black pianist and his white chauffeur, set in the segregated south of the US in 1960s. It is directed by Peter Farrelly.

It won the best picture in the musical or comedy category and lead actor Mahershala Ali won the best actor performance in a supporting role in the film.

Ali, who won an Oscar for ‘Moonlight’ now has a Golden Globe to add to trophy cabinet.

Regina King won in the best supporting woman film actress category for her role as the mother of a girlfriend of a man wrongly accused of rape and incarcerated as he awaits a trial. in ‘If Beale Street Could Talk’ the new Barry Jenkins film. He shot to prominence with the Oscar winning ‘Moonlight’. The film is an adaptation of a James Baldwin novel of the same name and set in 1960s New York. The Beale Street refers to a particular African-American conscience.

She said she would only work on projects where 50 per cent of the input was from women.

Darren Criss, who won the best actor performance in a TV series, for ‘The Assassination of Gianni Versace: American Crime Story’ thanked his Filipino mother on receiving his award and dedicated it to her, saying most of the good things in life were down to his mum. Aww.

He said: “This has been a marvellous year for representation in Hollywood and I am so enormously proud to be a teeny, tiny, part of that, as the son of firecracker Filipino woman.”

Oh won in the best actress in a TV drama category for her role in ‘Killing Eve’ and became the first Asian (Canadian-Korean) to win multiple Globes – she had won the supporting role award in 2006 for TV series,‘Grey’s Anatomy’.

She compered the event with Andy Samberg and felt the Globes were a moment of change (before she received the award).

In her opening monologue, she said: “I said yes to the fear of being on this stage tonight because I wanted… to look out onto this audience and witness this moment of change.

“Next year could be different, but right now this moment is real. Because I see you… all these faces of change. And now so will everyone else.”

When she won, she thanked her parents in Korean and bowed.

‘Killing Eve’ is a BBC production that first aired in the US and is written by Phoebe Waller-Bridge, who wrote and starred in the hit comedy series, ‘Fleabag’.

The Golden Globes were created by the Hollywood Foreign Press Association, and represent journalists from some 55 different countries and it first formed under a different guise in the 1940s. One of its early mottos was ‘Unity Without Discrimination of Religion or Race’.

Videos
Rami Malek in the press room following his win

BEST PERFORMANCE BY AN ACTRESS IN A MOTION PICTURE – DRAMA: Glenn Close

BEST PERFORMANCE BY AN ACTOR IN A MOTION PICTURE – DRAMA: Rami Malek, for Bohemian Rhapsody

BEST PERFORMANCE BY AN ACTRESS IN A MOTION PICTURE – MUSICAL OR COMEDY: Olivia Colman, for The Favorite

BEST PERFORMANCE BY AN ACTOR IN A MOTION PICTURE – MUSICAL OR COMEDY: Christian Bale, for Vice

BEST PERFORMANCE BY AN ACTRESS IN A SUPPORTING ROLE IN ANY MOTION PICTURE: Regina King

BEST PERFORMANCE BY AN ACTOR IN A SUPPORTING ROLE IN ANY MOTION PICTURE: Mahershala Ali, for Green Book

BEST PERFORMANCE BY AN ACTRESS IN A TELEVISION SERIES – DRAMA: Sandra Oh, for Killing Eve

BEST PERFORMANCE BY AN ACTOR IN A TELEVISION SERIES – DRAMA: Richard Madden, for Bodyguard

BEST PERFORMANCE BY AN ACTRESS IN A TELEVISION SERIES – MUSICAL OR COMEDY: Rachel Monahan, for The Marvelous Mrs Maisel

BEST PERFORMANCE BY AN ACTOR IN A TELEVISION SERIES – MUSICAL OR COMEDY: Michael Douglas, for The Kominsky Method

BEST PERFORMANCE BY AN ACTRESS IN A TELEVISION LIMITED SERIES OR FILM MADE FOR TELEVISION: Patricia Arquette, for Escape from Dannemora

BEST PERFORMANCE BY AN ACTOR IN A TELEVISION LIMITED SERIES OR FILM MADE FOR TELEVISION: Darren Criss, forThe Assassination of Gianni Versace

BEST PERFORMANCE BY A SUPPORTING ACTOR IN A TELEVISION LIMITED SERIES OR FILM MADE FOR TELEVISION: Ben Wishaw, for A Very English Scandal

BEST PERFORMANCE BY A SUPPORTING ACTRESS IN A TELEVISION LIMITED SERIES OR FILM MADE FOR TELEVISION: Patricia Clarkson, for Sharp Objects

Privacy & Cookies: This site uses cookies. By continuing to use this website, you agree to their use.
To find out more, including how to control cookies, see here: Cookie Policy
← Nrityagram – Odissi style comes to Science Museum, embodiment of Protima Bedi (former model and late wife of Bollywood star) vision
‘Verna’ (review) – Shining a brave spotlight on rape and women in Pakistan… →