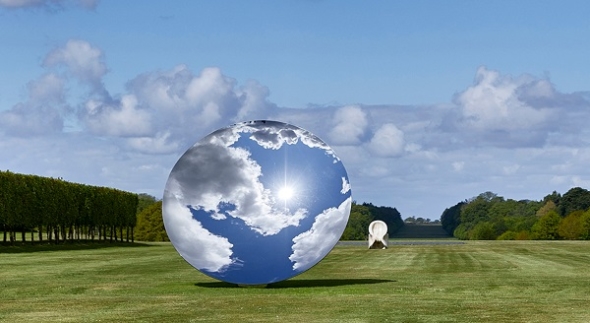 ARTIST Anish Kapoor’s largest outdoor exhibition in the UK is open to the public from today (July 12).

There are 24 works in all at Houghton Hall in Norfolk. Some of the larger works – mirrors and stone sculptures had to be specially transported to the grounds of the mansion. Some areas around the heavier exhibits had to be reinforced to stop the objects from sinking into the ground.

Among the exhibits is ‘Sky Mirror’ (2018) – which has the effect of turning the world upside down and there are also a series of carved marble sculptures from 2001-2003. A number of works, including some sandstone sculptures will be displayed inside Houghton Hall.

The exhibition was originally set to open in March, but the Government Lockdown meant it did not go ahead as planned.

Just this week, Kapoor has been vocal in the press for calling out “tokenism”, telling The Guardian newspaper that he wasn’t impressed by the way some galleries arranged exhibits from artists outside the west. He said his criticisms applied to Tate Modern, though he focused on the way the Museum of Modern in Art (referred to as MoMA) has just rearranged exhibits after a near £500m refurbishment.

Lord Cholmondeley, owner of Houghton Hall, said of the exhibition: “Anish Kapoor is a magician. His elegant reflective pieces throw back the world in mysterious ways.

“We are proud to have the opportunity to present an important group of Anish Kapoor’s work at Houghton, and are delighted to be able to welcome visitors once again.”

He said elsewhere that it had been sad that only he and his family could enjoy the sights and that half a season was better than none at all. The exhibition will run until November 1.

Of Indian origin, Sir Anish, has been a champion of liberal causes and was bitterly opposed to Brexit and has criticised the government over immigration and arts policies in the past.

He is one of Britain’s best known and popular artists – the ArcelorMittal Orbit in the Olympic Park in Stratford, east London is one of the iconic structures still associated with the games in the capital.

Kapoor also holds one of the record audiences for a show at the Royal Academy and is no stranger to controversy, having taken a patent out on the blackest black colour available – thereby preventing other artists from freely using it.

Houghton Hall was created for Robert Walpole, British prime minister (1721-1742) with the house being more or less complete in 1722. It is regarded as one of the great examples of Palladian architecture. Since 1976, parts of the award-winning grounds and the house have been open to the public.

Strict social distancing measures are in force and there is limited entry and tickets must be pre-booked.

The present exhibition has been curated by Mario Codognato and he is director of the Anish Kapoor Foundation.

Presented by Houghton Hall and sponsored by Dorotheum with support from Lisson Gallery.