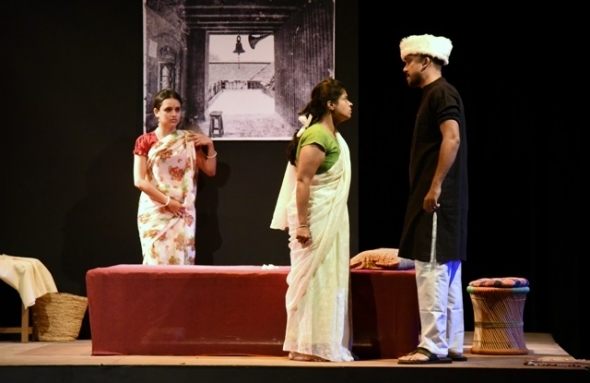 One of the country’s finest writers gets rare English performance…

TRY NOT TO MISS the opportunity to see, ‘A Friend’s Story’ which arrives at the Globe Theatre for two performances only as part of the India@UK2017 season (UK India Year of Culture, as announced in February of this year).

The play is the final part of the Festival of Independence that has been going on at the Globe on London’s Southbank and is curated by Tanika Gupta, whose own play, ‘Lions and Tigers’, has just ended wowing the audiences and critics alike.

‘A Friend’s Story’ is a revolutionary play, by one of India’s foremost playwrights and scriptwriters, Vijay Tendulkar, and it is a rare chance for audiences in London to be able to see his work performed in English.

This play, ‘Mitrachi Goshta’ was originally written in Marathi by the writer sometime in early 1980s and was first performed in India in 1981. Tendulkar was 80 when he died in 2008.

Set in a college campus in Poona (now Pune) during the 1940s it is essentially a story of three student friends caught in a complex love triangle.

Bapu is a shy young man, Mitra, is a young woman struggling to cope with her sexuality and the third protagonist is Nama, another girl to whom she is attracted.

It is an early play to deal with same sex relationships and the writer said it was drawn from real life.

This English translation – by author, Gowri Ramnarayan – was published by Oxford University Press in 2001.

It premiered at the National Centre for the Performing Arts (NCPA), experimental theatre, Mumbai in 2015, as part of the venue’s drive to present classic Indian writing to a new generation of audiences.

Akash Khurana, the director who presented the show then (and now), along with the NCPA, spoke to the Hindustan Times newspaper at that time.

He said: “I have always been fascinated by the quality of Tendulkar’s writing. It is quite extraordinary.

“In this particular play, his characters are strong, yet extremely vulnerable. It is one of the most challenging plays I have undertaken.”

He explained that that the theme of the play continues to resonate.

Tendulkar’s career spanned over five decades and he is a recipient of the Padma Bhushan and Sangeet Natak Akademi Fellowship.

He has written works which are widely considered to be classics and part of the modern playwrighting canon in India.

‘Sakharam Binder’ (‘Sakharam The Binder’ 1972) is about a man subjugating women; ‘Ghashiram Kotwal’ (Officer Ghashiram, 1972) is a political satire but was composed as a musical and was also made into a film.

These are seminal works of independent cinema (also known as ‘parallel’) which have much to say about contemporary Indian life.

Although society is more accepting of same sex relationships, this play serves as a timely reminder of how far India has to go on the issue of LGBT rights.

Indeed, some would say it is highly ironic that the play which lays bare the issues surrounding same sex relationships is effectively sponsored by an Indian government that chose not to overturn a court ruling upholding Section 377 – which continues to outlaw gay relationships in India.