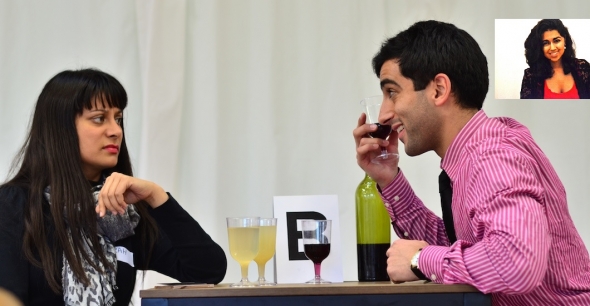 LOVE can be a bruising affair and it’s rarely a simple or easy ‘process’.

Add in the social whirl of London and some cultural baggage and you have a perfect recipe for comedy and drama.

‘Speed’ mines some of this and more and is the debut play by Iman Qureshi (pictured inset) in a new theatre season of plays and readings by Kali theatre.

Set at a speed dating event in London, ‘Speed’ uncovers the stories of three men and two women.

Opening on Tuesday (December 2) for five nights, Qureshi told www.asianculturevulture.com : “Dating is a great way to tell stories and it’s about the stories people tell themselves and their prospective partners.

“The drama and tension of all that is heightened at a speeding dating event.

“Each man talks to each woman and then dispersed within that, each character has a monologue, where they share their feelings and their secrets more.”

The characters are all Asian, but Qureshi, who is currently a 27-year-old full-time law student, has been careful not to go down a well-trodden path of family friction or familiar themes to create the dramatic backdrop or backstory.

She said: “I really wanted to write characters that are Asian but don’t walk around thinking of themselves as Asian – they’re just people and it’s about their experiences of love and relationships.”

Hell, some people don’t even know or believe or even realise Asians date at all – so strong is the ‘arranged’ or ‘assisted’ marriage narrative in the wider world, especially outside of London and many UK cities.

“There is a lot about Asian families in the mass media – I actually wanted to pull away from that – so there is no mention of family at all. It’s a deliberate thing – I am tired of the Asian family (thing)” said Qureshi.

It’s brave and original in that respect – especially for a new writer – to want to create characters that do not conform to convenient or familiar and rather obvious tropes.

There is nothing wrong in writing about family intrinsically, but there’s a danger of it becoming clichéd and unremarkable, something Qureshi has been aware of in a more general context.

“The play’s about being in your 20s and trying to establish yourself and your career and who you are as a person, living in London.  It can come across as a cliché but it came out of (real) issues I was having, as well as for the people around me too.”

In October, Qureshi appeared on a panel of writers and activists at the South Asian Literature Festival talking about gay issues and representation and made an impassioned plea for people not to be labelled or categorised.

“There’s a gay element (in the play) in the sense that it says that you won’t be happy unless you are true to who you are.

“If you accept who you are, others will accept it and it’s like a genie conveying a message.

“With dating, especially online dating, there’s a lot of labelling, it’s about a person’s eye colour, hair, skin colour, background, job – and we as people are so much more than the labels we are given – I am not against labels, they can be useful, but at the same time they can be very restrictive.”

As you would expect, Qureshi is naturally excited by her first production and the play represents a two-year journey for her.

“I wrote the play when I was 25 and last year it had a reading and it helped define the characters and sharpened out the rough edges. I am really excited and the actors have been amazing – it’s incredible to see them in rehearsals.”

The play, directed by Poonam Brah, is staged at Tristan Bates Theatre in central London.

It begins a season of other plays and readings from Kali this December, all staged at the Tristan Bates Theatre. There are readings of works by ten new playwrights, developed by Kali, beginning on Saturday, December 7.

There is also ‘Twelve’, which gives a voice to 12 women, who are the victims of honour-motivated murders on average in a year, according to the Metropolitan Police.

Janet Steel, Kali theatre artistic director, said: “The reason for the title ’12’ is that it is the one statistic that is used by the police as to how many women are killed through ‘honour’ violence in the UK each year – I feel that we don’t know any real statistics, but we are using 12 female Asian writers to write about these women.”

In the New Year, Kali will stage ‘The Husbands’ by Sharmila Chauhan in the Pentabus Theatre in Ludlow, Shropshire.

*For more details about Kali and its forthcoming programme, please see  http://www.kalitheatre.co.uk/

Privacy & Cookies: This site uses cookies. By continuing to use this website, you agree to their use.
To find out more, including how to control cookies, see here: Cookie Policy
← ‘A Passage to India’, Asif Khan talks about role and burgeoning career as actor, writer, playwright and producer – who also has Channel 4 writing bursary
‘Handlooms’ – Immersive theatre in a sari shop? Witness it for yourself with show in real time in real sari shops… →