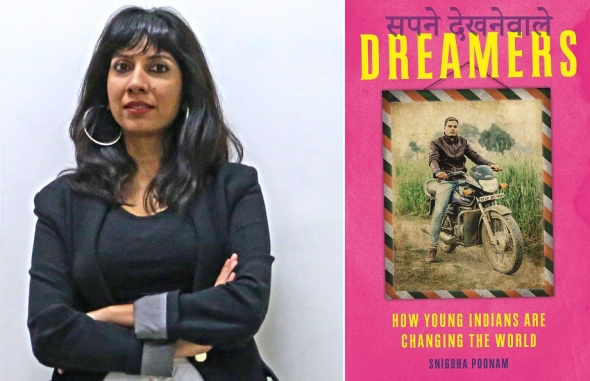 With more than half of its population under 25, a million people a month joining the workforce – and set to become the world’s most populous nation too, what is it young Indians want exactly…

JOURNALIST and author Snigdha Poonam, who is based in India, has looked into the soul of a young nation by talking to its protagonists and finds a group of people with high expectations and a particular sense of their country’s destiny but uncertain about the way ahead as the economy (according to your politics) falters or is getting there albeit slowly – and asks how will these half a billion people change our world? We asked her some questions, via email, ahead of a visit to London this week.
Poonam will also be addressing some of the central themes of her work at a public talk on Wednesday (January 17) at Asia House, the business, arts and cultural learning institute, in Central London, with moderator Nomia Iqbal. (See below for the link to more information about this and booking tickets).

www.asianculturevulture.com (ACV): What led you to write your book, ‘Dreamers: How Young Indians Are Changing The World’?

Snigdha Poonam (SP): As a journalist based in Delhi, I specialise in stories of young Indians making sense of a world spinning off its axis.
More than half of India’s population is under the age of twenty-five. It is the largest number of young people of any country on earth. I was convinced that decoding them – perhaps six hundred million people – was crucial to decoding contemporary India.
The country is going through the trickiest phase of its transformation—political, economic, cultural—and no has more at stake than people starting out their adult lives. The more I talked to young Indians in remote corners of the country about their lives, from political preferences to dating choices, the more I felt the need to go closer.
In mid-2014 I began travelling to small towns and villages to find out what young Indians want, how they intend to get there, and how their dreams will change their world and ours.
‘Dreamers’ covers the journeys of six of them as they chase their dreams of becoming wealthy, famous and powerful–media mogul, motivational speaker, elected politician, Bollywood star…

ACV: Can you please give us a glimpse of the way you think young Indians are changing the world?

SP: As hundreds of millions of English-speaking, technologically smart people who are faced with a growing lack of opportunities in their own country – a million people enter the Indian workforce every month, only a tiny fraction end up with jobs – and who feel India deserves to rule the world, young Indians are increasingly looking outside to fulfill their dreams of wealth and power.
This mix of underutilised talent and misplaced chauvinism means both good and bad things for the world. Take tech-support scammers. In 2016, Microsoft published a global survey showing two in every three people had been exposed to a tech-support scam in the preceding 12 months. Americans lose around $1.5bn (£1bn) to tech-support scams every year; 86% of them originate in India. As part of reporting Dreamers, I embedded myself in the world of Delhi’s vast network of con call centres and found that for large numbers of high-school and college graduates arriving in the capital looking for a job, cheating vulnerable strangers in faraway countries is the only way to enter the job market. For the masterminds of these scams, who are attracted to a lifestyle involving luxury cars, late-night parties, exotic holidays and beautiful women, running these scams is the easiest route to making thousands of pounds every day.

ACV: How do young and brilliant Indians lower down the social strata cope with chasing their ambitions in a hierarchical society, often resistant to change and even the idea of social mobility?

SP: In many ways: by moving to cities, which provide them with agency and anonymity, through education and entrepreneurship, through affirmative action. India has an old quota system for disadvantaged groups in public jobs, publicly funded colleges, and electoral assemblies -and through political mobilisation, starting from university elections, where the minorities – lower-caste groups, tribes, Muslims, Christians, women – have been locked in a vigorous fight with the mainstream, which is led by high-caste Hindu men, to assert their rights.

ACV: It’s quite noticeable (through social media and similar platforms), that some young Indians are very liberal and progressive but society as a whole in India remains conservative and the presiding government led by Prime Minister Narendra Modi and his Bharatiya Janata Party (BJP) would never describe themselves as liberal – so how can they challenge orthodoxy and create a more liberal space?

SP: From marrying outside of their caste or religion, which can be for many young Indians the ultimate transgression against tradition; by protesting in the streets and on social media against the national culture of discrimination – Hindu majoritarianism, caste violence, sexual harassment; and by trying to change India’s politics by entering it.
Dreamers follows, for example, the journey of a young woman in a small town in north India who becomes the first woman in her imperial university’s 128-year history to contest the president’s post at the students’ union to assert her idea of India as a democracy where everyone -Hindu, Muslim, Dalit, Woman – has an equal chance at freedom and opportunity.

ACV: What do young Indians think about Britain, if anything? And the West in general? Do they have any discernible views about British Asians?

SP: It has been 70 years since India won independence from Britain, but young Indians continue to seek a constant and aggressive validation of their country’s special place in the world. They are more exposed to the West than their parents and grandparents – from the brands they buy, to the universities they attend – but also more anxious for evidence of India’s pre-eminence in a globalised world.
You only have to go online and go through the discussions young Indians are having with each other about India and the world. It’s a bubble loaded with hyperbole: “First country in the world to produce steel”; “largest postal network in the world”; “highest cricket ground in the world.” You have to be brave to argue with an entry pronouncing “Sanskrit in the most suitable language for computer software” or “India’s GDP overtook China’s in May 2015”. Recently, however, as the economy sinks and the opportunities shrink, young Indians have begun to express doubts about their and their country’s future, asking each other if “India will ever become a superpower” or if the chosen prime minister “Narendra Modi is good for India”.
Their attitudes to Britain remain coloured by postcolonial angst; as some of call-centre scammers scaring British pensioners into buying expensive security software for their perfectly healthy computers told me, they see the scam as a revenge against “200 years of slavery.”