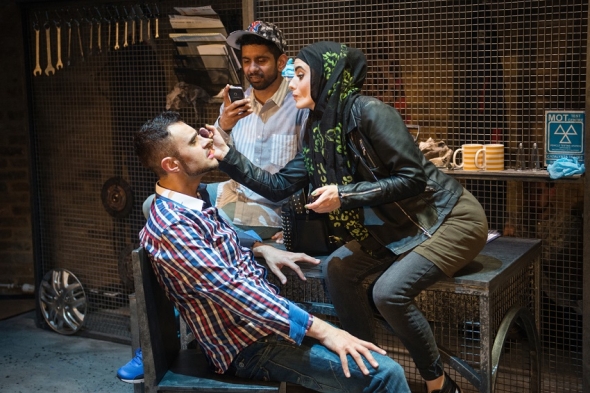 THERE perhaps could not be a better time for a play like ‘Combustion’ to reach our theatres.

The play written by actor-writer Asif Khan and set in Bradford, deals with second generation British Asian/Pakistani Muslims and the society around them.

It first premiered at Tara Theatre in South London last month and completes its run at Arcola Theatre, Hackney today (June 24) before going around the country and finishing in Bradford itself as part of the city’s literature festival.

Khan, a product of the city and RADA (Royal Academy of Dramatic Art) is a fast rising star in the theatre world – and his reputation has been further enhanced now with the play being nominated for two Offies – (Off West End awards) including best new play. Khan also appeared in a recent BBC Hot Talent writing list.

‘Combustion’ also has a nomination for Mitesh Soni in a best supporting role in a play.

Both nominations are for the Arcola Theatre production and the play is directed by Nona Sheppherd and produced by Tara and Khan’s own production outfit, AIK Productions.

Khan spoke to www.asianculturevulture.com last month, while the play was still in rehearsals and before the more recent terror attacks (Manchester & London Bridge).

While the positive representations of faith have appeared on (social) media in relation to the horrifying Grenfell Tower tragedy and the shocking attack on worshippers in Finsbury Park, London, the general mass media narrative is mostly unhelpful and prejudicial – as Khan himself pointed out.

“What inspired me to write it was my frustrations as a British Muslim – moderate and liberal – and I felt like my voice was not being heard or my opinions were not put in the newspapers or on TV,” he told www.asianculturevulture.com

In some ways, the terms Khan uses aren’t satisfactory in themselves – no criticism of him intended.

Mostly, he just means ‘normal’ in the way that most people abhor violence and don’t approve of anyone being forced to do things against their will. Most us are liberal and moderate – in so much as those terms mean anything in a non-politically precise context.

Muslims are not the other – to be categorised as ‘liberal’ or ‘moderate’, (though it may be fashionable in some media circles to play this game), they are you and me. And the way ‘they’ (it isn’t us and them) react to violence and terrorism is no different. Period. Does it even need to be said…?

Into this tricky space (because certain politically motivated groups have a vested interest in keeping it so), Khan’s ‘Combustion’ is an important and vital play.

It’s funny, believable and rooted in the everyday, Khan stressed.

“I wanted to tackle issues but with humour,” he emphasised. “It’s partially set in a garage in Bradford.”

‘Shaz’ (Beruce Khan) owns this garage and sounds like your almost archetypal wide boy (but having not seen the play, it’s an interpretation of Asif Khan’s brief character description).

“He’s got some marriage plans on the go and he’s got his business and a sister and a mum and he represents the ordinary Pakistani man,” said playwright Khan.

He suggested that it is the sister character though, he is rather closer to in his own personal outlook.

‘Samina’ (Shireen Farkhoy) studies at Bradford University and appears more politically conscious and is interested in justice and social causes.

The comedy that might arise from Shaz, ‘Faisal’ and ‘Ali’ (two other garage workers) and their differences is somewhat neutralised by the emergence of ‘Andy’ (Nigel Hastings), a leader of a right-wing nationalist group that is exploiting the fallout from a grooming scandal.

Khan, from all accounts, has put together a veritable cast of characters and inserted them into a ringer of a tough and very believable social situation – along the way there is comedy and social insight.

“There are issues within the Muslim community I want to deal with, as well,” Khan declared.

It feels like an important moment for a play to deal with all the nuances and do so from a position of respect and understanding.

Khan appears to have put issues on the table and it’s important in changing a mass media narrative which does few people any real favours really – and even if it sounds a bit starker than it probably should, it’s worth reminding everyone what led him to write ‘Combustion’ in the very first place.

Khan said: “I don’t feel like people are given a platform to condemn these terrible acts and say this is completely wrong and there are plenty of Muslims who condemn it.”

Privacy & Cookies: This site uses cookies. By continuing to use this website, you agree to their use.
To find out more, including how to control cookies, see here: Cookie Policy
← ‘How To Be Human – Life Lessons by Buddy Hirani’ – book is hit among film glitterati and comes to the UK now…
Nicholas Prasad on his role in contemporary ‘Mafia’ setting for Shakespeare’s ‘Much Ado About Nothing’ →