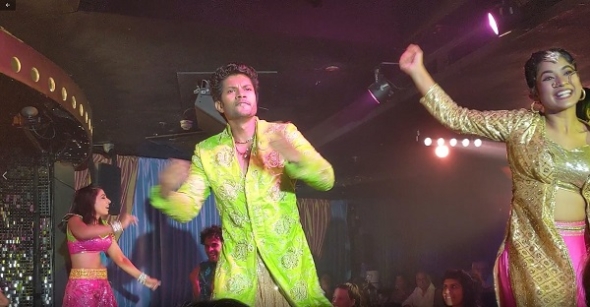 FANCY a trip to Mumbai?

Well, perhaps, it isn’t really the best time to go with the monsoon raging…but there is a small corner of London that has been transformed into a Mumbai hideaway and has entertainment and food to make you feel like you are in the Indian city of dreams.

The show, ‘Mumbai Masala’ is currently playing in London and is described as an “immersive Bollywood cabaret”.

This is a show which involves typically energetic Bollywood signature tracks, dancing – and the food and participation are optional.

It’s positioned as the first show of its kind in the West End – even though it is in Fenchurch Street at the edge of the City of London and really more east than west, but we don’t have to be pernickety.

On the evening, www.asianculturevulture.com visited there were ten dancers – with an equal split between men and women.

It’s a lively, fun evening and if you are into your Indian cuisine, it is worth eating too. Nisha Parmar, who was in the semi-final of ‘Masterchef in 2018, has designed a seven course Indian menu (with prosecco) and it doesn’t disappoint whether you go for the non-veg or vegetarian options or vegan.

The show has a story and while it isn’t going to move you terribly emotionally – it might get you out of your seat and encourage you to shake a hip in true Bollywood fashion.

Some of the most recent tracks from hit films get a play out. There is music from Lagaan; Devdas;, Musafir; Bunty Aur Babli; Jhoom Barabar Jhoom; Rang de Basanti; Dhoom; and Dhoom 2; and AR Rahman tracks from ‘Slumdog Millionaire’.

The set is such that you feel you are sitting in Mumbai’s film city or should that be the legendary Mehboob Studio.

Dancers get the show under way and you don’t know what to expect until Chef Kurry Balti (Chander Khanna) appears – he just looks like a distinguished Indian gentleman in a rather fetching sherwani.

He explains that what we are about to see is his story – how he fell in love and how his food business took him to Mumbai and the film world and what he learnt along the way.

It’s a jaunty tale and when put in the context of some Bollywood plots, actually quite reasonable and relatable.

Khanna has a lot of presence and is a charismatic narrator – most of the show is a musical but without any live music.

The dancers are good and all-in-all, it’s a very enjoyable and pleasant evening and some of you may feel a little ‘homesick’ if you love your Bollywood, Mumbai or India, even more generally. It does feel a bit like actually being there for around 90 minutes and being entertained in that way.

As for the food, it is excellent – a very well considered and appropriate menu and not overpowering as some Indian dishes might be – given this billing.

If you have seen ‘Taj Express’ or ‘Merchants of Bollywood’ which previously came to the West End and are more like traditional musicals, then this is a more modest production but no less enjoyable for it.

Two of the leads appeared in Merchants and they are Sadhvi Majumdar and Sushant Pujari. The choreography has been done by the Pujari Brothers. It’s written and directed by Toby Gough and produced by Proud, a company which specialises in cabaret, live events, restaurants and started with a gallery in Camden.

There are various deals and packages and some are suitable for families too – see the link below for further details.