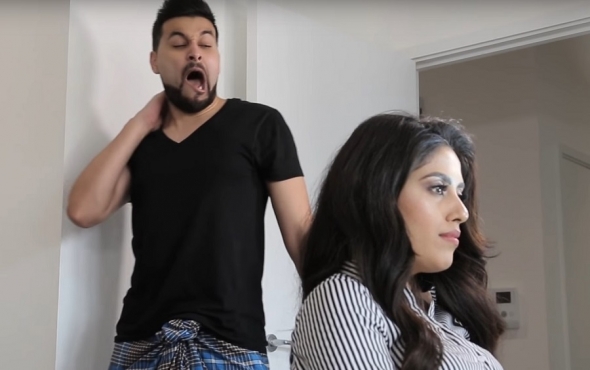 No, they are artists or superheroes who just happen to work in a shop.

That might be a line straight out of the cult Youtube series that is ‘Corner Shop Show’ but it isn’t – at least for now.

Islah Abdur-Rahman (above left) is the creative behind the Youtube channel which he created in late 2013.

It’s come a long way since then, ratcheting up nearly 35,000 subscribers and a following which is active and engaged outside of watching the comedy drama just on Youtube.

What perhaps makes it different from other Youtube series is that Rahman and his team host premieres of their special episodes, before they upload them to Youtube – they hosted four premieres during their last season.

Also, Rahman is no one-man channel, this is like a sitcom series with half a dozen regular characters and many more supporting roles.

It revolves around Malik (Abdur-Rahman himself) and his faithful but not always very smart sidekick Tony (series co-creator and co-writer Michael Truong) running a South London corner shop.

Malik’s dad has left him in charge and the series has followed the ups (not getting evicted) and downs (a video of Malik arguing with a black customer goes viral as he is accused of racism).

It’s funny, relatable and captures the character of South London’s diverse communities in a way not many mainstream comedies are doing in the UK right now.

The Corner Shop folks engage directly with their viewers, encouraging them to support their premieres (to raise money) and watch a special episode broadcast on a big projector screen. There’s popcorn and drinks, and it’s all styled as a cinematic experience.

There’s also a red carpet, pictures and interviews and the series often sees established stars such as Ameet Chana and rising ones such as Tanya Robb of ‘Hollyoaks’ and Hamza Jeetoa from BBC’s ‘My Jihad’ make an appearance in the comedy drama and lend their support.

Last year the LA-based but London-born singer Sonna Rele appeared as a sweet-tongued busker in a Christmas special.

We last caught up with Abdur-Rahman in November 2015, as he and his team embarked on what they billed to be a feature like finale to series 1 and the final episode of 10, and a conclusion of their first season.

But it didn’t quite happen like that – and after a break where Rahman and his other co-writers and leads took time out to work on other projects, they are back. They raised £2,000 from the last fundraising initiative and ploughed it into new equipment.

Episode 10 will be unveiled at their latest premieres on Saturday (July 29) at Rich Mix in Shoreditch, London and then broadcast to the world on Sunday (July 30).

It’s the start of Season 2 now and five more episodes have already been scripted.

Some fans have waited for a long time and while Abdur-Rahman and his team have put up a host of supporting material from outtakes to short interviews with cast members from episode 10, you can sense the comedy’s followers are getting a little anxious.

There have been practical issues from raising finance to make more episodes, to losing use of the shop they filmed in.

Abdur-Rahman told www.asianculturevulture.com getting the keys to a shop where they could film lifted them all.

He explained: “We put out a Facebook post and asked anyone if they have a shop to let us use, and by God’s grace a really generous family gave us the keys to their shop!

“Now we’re back, ‘Corner Shop’ is looking like it never has before! More content for our fans to watch! We’re continuing the storyline and numerically on YouTube, so if anyone wants to binge watch they don’t get confused with the line up! Next up – Episode 10!”

The story has moved on, in that Malik is now fighting for not just for his own survival, but that of a whole community – the local Mayor is plotting to build a shiny new shopping mall in the area and bulldoze the shops that lie in his way.

“Malik, Tony and a few others stand to oppose him to save their careers, getting closer to the truth each time,” Abdur-Rahman told us.

He said he hasn’t given a lot of thought to what happens after Series 2 but the fact that he has built an audience and is striving to deliver keeps him motivated.

As is customary, there are new characters and there is a significant new addition in Karishma Bhandari who plays Malik’s twin sister, Maleeka – older by 15 minutes.

Bhandari told www.asianculturevulture.com: “They don’t really get on – she’s getting married and a lot of the new series will about the marriage. She’s very sorted compared to Malik.”

Expect fireworks and comic tantrums between the two.

Bhandari auditioned for the role and has a fair bit of experience, having worked in India and on a Bollywood film (‘Club Dancer’) as well as appearing in minor roles in ‘The Muppets Most Wanted’ and ‘The Inbetweeners 2’.

She’s loved working on the latest episodes and many are keen to see just what effect she will have on her fictional younger brother.

Having just returned from a work scouting trip to the US, she’s seriously considering a move stateside.

“The casting range is bigger,” she said. “They were agents out there saying we can put you up for auditions, you have a diverse look, you can play Hispanic.”

She said that when she goes to some auditions here and looks to play the Asian character, they reject her.

“They want a particular look and I don’t look like a a typical Indian girl, it’s like they want me to get a tan and dye my hair jet black. Are you telling me every Indian girl looks like that?”

Bhandari is of Punjabi origin and is based in Essex and grew up there, studying at Robert Clack School in Dagenham and then at Barking Broadway Theatre doing Performing Arts.

Listing
The special screening of Episode 10 of ‘Corner Shop Show‘ is part of Takeover (until August 12) – a festival dedicated to exploring the interests and creativity of 16-25 year olds.

Episode 10 will be uploaded to Youtube on Sunday, July 30.

Privacy & Cookies: This site uses cookies. By continuing to use this website, you agree to their use.
To find out more, including how to control cookies, see here: Cookie Policy
← Banita Sandhu: British student says I hated my skin colour (growing up) and believes opportunities better in Bollywood than UK – playing ‘stereotyped Asian lesbians’
Kiln Theatre (Tricycle) new season – ‘We’ve changed name and diversity and gender themes are bolder and prouder’, claims Indhu Rubasingham →