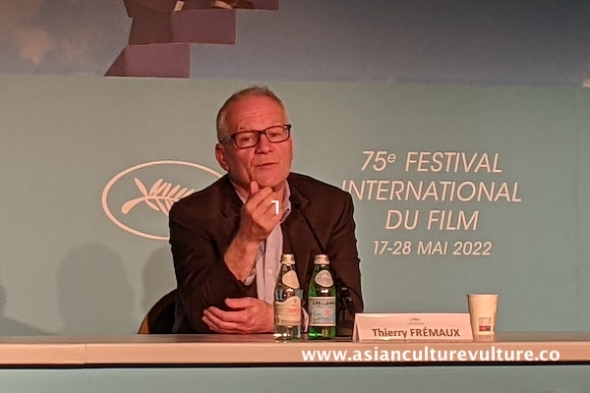 THIERRY FREMAUX, delegate general of the Cannes Film Festival, has come under fire for not selecting many black director films this year – there is only one in the 70-strong new films official line up of films here (May 17-29).

Anne Cisse’s ‘Salam’ has a special screening, while ‘Father & Soldier’ is a film set in both Senegal and France but is directed by the white Mathieu Vadepied.

Fremaux also defended the selection of India as the country of focus for the market section, celebrating both 75 years of Independence of India from British Colonial rule in what is the 75th edition of the world’s biggest and most glamorous film festival, as well.

At a press conference yesterday (May 16) Fremaux speaking to the press at an afternoon conference mainly in French, said that festival had a different stance to the government of France or other bodies who are boycotting Russia or not supporting those that have not spoken out against the war in Ukraine.

Journalists asked why India had been given the country of honour badge in this festival, with special initiatives to mark its films and filmmakers in the market section and whether this was connected to the Rafale fighter jet deal between France and India and the recent meeting of Indian leader Narendra Modi with French President Emmanuel Macron in Paris.

Fremaux responded: “One might consider that you should sanction countries that support Russia – well no, we haven’t gone that far.”

India would say that it doesn’t support the war by Russia against Ukraine, but has stepped back from openly voicing criticism at what is seen as a reliable and longterm friendly partner nation. Much of India’a defence equipment is purchased from Russia.

Fremaux also had to defend the festival’s selection of just a handful of women this year – he pointed out that the top prize last year went to Julia Ducournau’s ‘Titane’ and to be fair to Fremaux in 2020’s cancelled edition – British director Steve McQueen’s BBC trilogy of narrative fiction films about British (black social) history in the 1970s had been chosen to screen at Cannes before the festival was scrapped because of the global pandemic.

Fremaux explained that when the film was selected the war had not broken out and there was no specific sanction against Russian backed films.

The festival is also screening ‘Mariupolis 2’ a documentary by Lithuanian director Mantas Kvedaravicius who was filming in the city and tragically died in Russian attacks on the city.

Responding to a question about covid, Fremaux said the Chinese had not been able to travel but much of the film world has returned to the Croisette and there are very few formal restrictions regarding the festival and covid this year – even mask wearing is optional.

Elsewhere, there has been a problem with issuing festival badges and the film ticketing app – but as the festival moved towards its first official day, there appeared to be significant improvements and things returning to normal.

For Bollywood fans today (May 17), there is the eagerly anticipated appearance of Deepika Padukone who is serving on the main competition jury this year. There is a press conference later this afternoon.

Much of the early buzz at the festival will be around Tom Cruise’s ‘Top Gun Maverick’ – but with red carpet launches in London and other commitments, Cruise is only staying for a special Rendezvous to talk about his long and highly successful career.

Baz Lurhman’s ‘Elvis’ is among the other eagerly anticipated world premieres here.

Follow us as we report from Cannes 75…see our travel pictures soon!