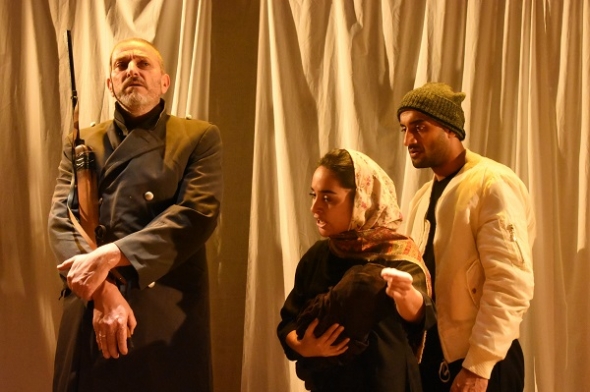 New play set during the Refugee Crisis in Europe has power and purpose, as country grapples with Shamima Begum issue…

DESPERATE folks clambering onto Europe’s beaches may not be a common sight on our TV screens any more, but just two years ago, thousands were doing this.

Throw in the Paris and Nice terror attacks, the Brexit vote, Donald Trump beginning his journey to the White House, and the UK’s own experience of sectaranism and violence further back and you have a pretty potent mix.

The daily images of refugees from Syria and Libya prompted playwright and actor Jonathan Brown from Sussex-based theatre outfit, Something Underground, to write a play, ‘Of Our Own Making’ which comes to its final show tomorrow night (February 16) at Tara Arts in London.

It deals with a huge range of issues – not just refugees but Islamist radicalisation and responsibility – and powerfully encases them in a very human story of loyalty, faith and deceit; and there is a thrilling and ‘will they, won’t they ending’.

Its topicality is simply heightened by issues surrounding Shamima Begum.
The now pregnant 19-year-old Bethnal Green schoolgirl wants to return ‘home’, having lived in Islamic State (IS) territory and pledged her allegiances to the fundamentalist and hard-line Islamist terror group.

While Brown’s play centres mostly on the experiences of three refugees from the Middle East, making their way to Britain and Europe, via Libya, it also links them to a young British journalist and a government interrogator and two of the refugees have significant back stories that play out to chilling effect in the final quarter.

Some of Brown’s own insights have also been gleaned from the tragic death of 26-year-old Anna Campbell, who died in northern Syria fighting for the Kurdish Women’s Protection Units, known as the YPG against IS. Her father Dirk Campbell lives close to Brown and is a music composer for theatre and film and has contributed music to ‘Of our own making’.

“I wanted the characters to tell the story and not to make it one-dimensional,” Brown told acv earlier this week before the Begum story broke.

Hidden within is the backstory about the female journalist (Erin Elkin) – and without wanting to give away too much away – she is from Northern Ireland and arrives in Greece looking for a story for the Daily Mail.

“It’s about two worlds meeting. She is haunted from the past and her own father’s involvement in sectarian conflict and she meets Saif who has also been haunted by sectarian troubles,” Brown narrated.

It’s a powerful juxtaposition – though during the play it might not hit you quite as much as when you come to think about it later.

One of the other aspects of the play that really hits you is about the process of grooming and how it often afflicts those who are very vulnerable already and ripe for picking, as it were.

Brown, who has a teaching background, and has worked with excluded pupils and ran workshops prior to this play with schoolboys, exploring grooming, alienation, isolation and violence, feels there are connections and shared experiences that often take a young person to extremes.

He said as well as the direct experience of the workshops, he was also partly influenced by another play, Javaad Alipoor’s ‘The Believers are but Brothers’ which had a run at the Bush Theatre last year. ‘Of Our own making’ has a wider and more ambitious scope and a strong international dimension.

“Alipoor located radicalisation as a crisis of masculinity – I think there’s something in that. I’ve been part of men’s groups and been to men’s conferences and am interested in the male experience, and have issues with my own father and been interested in absent fathers and often these young men are vulnerable to being groomed.”

The story of ‘Hussan’ (Hamza Siddique) is particularly powerful and encapsulates a certain Britian Asian experience that can easily happen and is very relatable.

“It can be when you have no role models and there is nobody to guide these lost souls. Any child in that position can be moulded,” Brown explained.

‘Saif’s (Vincent Kerschbaum) story is also very effecting – a doctor in Iraq, he finds himself drawn into a conflict not of his own making and certainly not of his own choosing and his options became very narrow.

“I am interested in the idea of conscription and is there no path to redemption?

“The tag line is ‘it takes a village to radicalise a child’. It is intended to be a parallel to young men who are groomed into far right gangs. And in this, Britain, or the world, is the village.”

‘Our of own making’ continues until Saturday, February 16 only, 7.30pm

Privacy & Cookies: This site uses cookies. By continuing to use this website, you agree to their use.
To find out more, including how to control cookies, see here: Cookie Policy
← Voices at The Globe – young and often marginalised take centre stage with Shakespeare and inspire
Sindhu Vee – ‘Sandhog’ Edinburgh Fringe Festival #Edfringe- the open marriage question… love and cheese toasties →