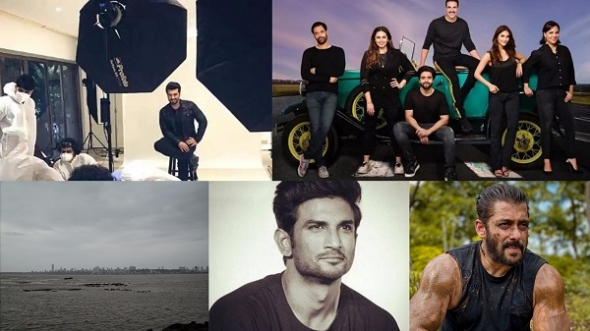 As the late Sushant Singh Rajput dominates entertainment headlines, Bollywood crawls back to normalcy one step at a time, reports our intrepid cinema watcher at heart of tinseltown…

I’m back, reporting from a monsoon drenched Mumbai that is still battling the pandemic.

Cases are still on the rise here though the government wants us to believe otherwise.

In Bollywood, the late Sushant Singh Rajput is still making news. In fact, more than what he used to when he was alive.

Almost daily, Indian news outlets are abuzz with either new revelations or comments from a fellow star about Singh’s death.

A few ago, BJP politician Subramanian Swamy had written to the Indian PM Narendra Modi requesting for a CBI (Central Bureau of Investigation) probe into the suicide of Singh. The CBI is a bit like the FBI in America and has more investigative powers.

Modi acknowledged the letter, thereby giving people reason to believe a bigger probe is on the anvil.

It may be noted that star Kangana Ranaut, Shekhar Suman and BJP MP, actor Roopa Ganguly had also called for a CBI enquiry. But the biggest twist in the suicide saga came in the form of a police complaint filed by Singh’s father KK Singh in Patna, accusing his son’s girlfriend, Rhea Chakraborty of abetment to suicide, criminal conspiracy and cheating.

Chakraborty’s father, mother and brother are also named in the FIR (First Information Report), which is how many criminal cases begin in India.

KK Singh also claimed that Chakraborty, who was living in with his son, had left his home and taken away his cash, jewellery, laptop, credit card and medical prescriptions.

He also alleged in the complaint that after Chakraborty blocked Singh’s phone number, Singh had told his sister that she may disclose the contents of his prescriptions to the Indian media with the implication being that Singh would be unable to get work and be seen as being mentally unstable.

In the police complaint, Singh’s Dad also said he feared Chakraborty could also start accusing him of abetting the suicide of his former manager Disha Salian. In India there is such a criminal offence.

After the complaint was filed, a police team from Patna landed in Mumbai and started questioning Chakraborty and her family members, and looked into the statements of people such as Sanjay Leela Bhansali, Apoorva Mehta, who is the CEO of Karan Johar’s Dharma Productions and Mahesh Bhatt, which were recorded by the Mumbai Police earlier.

Earlier this week, while being interviewed by a radio station, AR Rahman was asked why he was doing few Bollywood films, to which, the noted composer replied that it was because a ‘gang’ in the film industry is working against him.

This, coming from someone who is known to be shy and mostly introverted, shocked not only Bollywood insiders but fans as well.

Rahman is huge in India because he has been instrumental in spreading the tentacles of Bollywood music far beyond its traditional fan base, the Indian diaspora.

The general view here is that if a person of his stature can be sidelined, then those in the lower rung are far more vulnerable.

It may be recalled that Singh’s suicide had started a debate about nepotism shortly after the star’s death in June.

And, now, we are hearing voices about ‘gangeism’ in Tinseltown.

In a series of tweets, singer Sona Mohapatra spoke about how her husband, composer Ram Sampath, was targeted by an “illiterate, self-important gang”.

The controversy is still bubbling away and the coming days are likely to see more reactions.

But what about the all-important Bollywood movies, which have found a new launch pad nowadays, on streaming or OTT – as it is colloquially referred to here?

Officially, Mumbai is still under lockdown with a lot of restrictions still in place.

TV shows have resumed shooting by adhering to government’s Standard Operating Procedure guidelines, though most Bollywood production houses are still contemplating their next move.

Salman Khan, who has remained at his Panvel farm outside Mumbai (about 35 miles south-east of Central Mumbai) since the early lockdown (in March), and rising star, Disha Patani are scheduled to restart shooting for ‘Radhe’ at a Mumbai studio soon; the shoot was originally scheduled for Azerbaijan.

Akshay Kumar is set to fly to Scotland to shoot his movie ‘Bell Bottom’ – though the production could face present quarantine regulations.

Kumar has shot nine ad commercials in the city. Vidya Balan and Ayushmann Khurrana shot for endorsements in Mumbai and Chandigarh, respectively. Arjun Kapoor has also taken to Instagram to share a shoot photo.

But there is a word of caution. It is believed that Abhishek Bachchan caught the virus while visiting a dubbing studio every day.

He and his dad Amitabh Bachchan are still recuperating in the hospital. Aishwarya Rai Bachchan and daughter Aaradhya have recovered and left the hospital over the weekend. It’s thought Big B is likely to follow suit soon.

Till next month, stay safe and look out for Nat’s monthly show next week and other film news on www.asianculturevulture.com