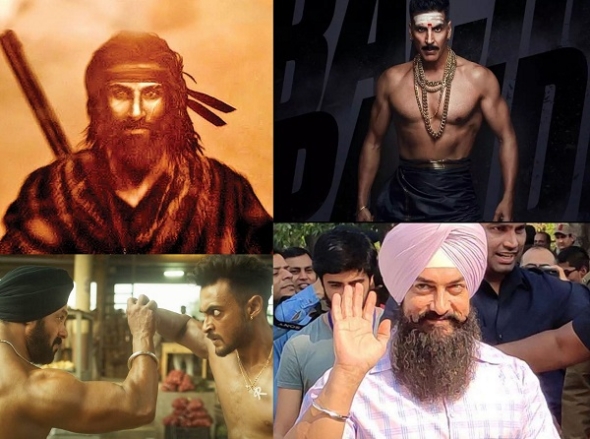 When it comes to good cinema, 2021 has a lot in store. Here’s the lowdown from our cineaste in Mumbai…

IT WAS A ROUGH year – 2020. The pandemic halted shoots and robbed it of millions in box office revenue.

The suicide of Sushant Singh Rajput came as another blow. It led to a public backlash against nepotism in the industry and was followed by arrests and questioning of film stars in drug related cases, which rumble on…

With theatres opening now and talk of vaccinating a large chunk of the population in the next few months, the outlook is certainly much rosier and there is a buzz about some releases unspooling this year and next.

But just in case your excitement levels haven’t quite reached fever pitch, there’s also these to consider…

Bachchan Pandey For those who don’t read the Bollywood pages first thing in the mornings, superstar Akshay Kumar has six films lined up this year including ‘Sooryavanshi’, ‘Prithviraj’’, ‘Bell Bottom’ (a 1980s period piece shot in Glasgow) , ‘Atrangi Re’ and ‘Raksha Bandhan’.
In ‘Bachchan Pandey’ he reunites with his ‘Housefull 4’ co-star Kriti Sanon. Directed by Farhad Samji, the story of the film revolves around a gangster who wants to be an actor. The film’s crew started shooting in Rajasthan this month. The latest on this is that it will release only in 2022 now.

Pathan
Shah Rukh Khan, who’s had a string of flops in the recent past, returns in this action thriller opposite Deepika Padukone. Directed by Siddharth Anand, it also stars John Abraham and Salman Khan in a cameo. Yash Raj Films, which is producing the film hasn’t given away much about this project.

Krrish 4
Director Rakesh Roshan’s film will also have a superheroine this time around along with the superhero Hrithik Roshan. Hrithik had played ‘Krish’ the main character and Rohit in the previous parts.
The upcoming film will bring back characters, Jaddu and Rohit from the dead. Hrithik also plays a third role – that of an antagonist. Since the film is still in the scripting stage, it is more than likely to release only in the last quarter of the year, at the earliest.

Maidaan
Other than ‘Bhuj: The Pride of India’, this would be the second film for Ajay Devgn in 2021. Helmed by Amit Ravindernath Sharma, it tells the story of Syed Abdul Rahim, one of India’s most successful football coaches. The film had stopped shooting last year but is understood to have resumed now.

Antim: The Final Truth
Other than last year’s ‘Radhe’, which will is likely to release on Eid (May 2021), this will be Salman Khan’s second film of the year. Directed by Mahesh Manjrekar, it also features Khan’s brother-in-law Aayush Sharma. Reportedly, Khan plays a Sikh cop in the film.

Ek Villain 2
This Mohit Suri directed venture is another keenly awaited film. Interestingly, Aditya Roy Kapur, who featured in the film’s first instalment in 2014, is not part of this. In fact, he has been replaced by John Abraham; Disha Patani also stars in the movie. Abraham’s three unreleased films of last year, ‘Mumbai Saga’, ‘Satyameva Jayate 2’, ‘Attack’ and ‘Pathan,’ where he plays an antagonist up against SRK, and his production ‘Sardar & Grandson’, are also slated for 2021 releases.

Shamshera
Set in the 19th century, the film is based on a dacoit tribe’s fight against the British. Ranbir Kapoor, who will be also seen in Karan Johar’s big budget production ‘Brahmāstra’ in 2021, plays the roles of Shamshera and his father in the film, while Vaani Kapoor stars as a dancer. Sanjay Dutt is also part of the cast.

Cirkus
Hit-maker Rohit Shetty’s latest movie, which is a take on the classic Shakespearean play, ‘The Comedy of Errors’, started shooting late last year. Set in 1967, it has Ranveer Singh, whose other two films ‘’83’ and ‘Jayeshbhai Jordaar’ are also in line for a release this year, playing double roles. Pooja Hegde and Jacqueline Fernandez also feature in this film.

Laal Singh Chaddha
This Hindi adaptation of Tom Hanks’ Forrest Gump featuring Aamir Khan and Kareena Kapoor Khan encountered the covid roadblock last year. Salman Khan is also reported to be doing a cameo for the film, which is expected to hit theatres during Christmas 2021.