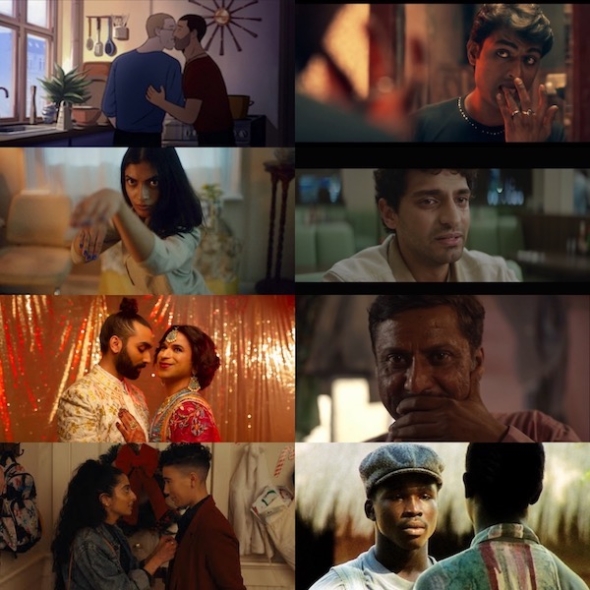 BFI FLARE – the London festival that focuses on LGBTQIA+ inspiring stories – starts tomorrow (March 16-27) and has some unique stories coming to the big screen – both features and a host of shorts.

There will be six world premieres, 56 features and 84 short films, from 42 countries.

Opening this year’s festival will be Alli Haapasalo’s coming of age drama ‘Girl Picture’, about three teenagers on the brink of womanhood. It won Sundance Film Festival’s World Cinematic Dramatic Audience Award early this year and featured at Berlinale last month as well. www.asianculturevulture.com saw this powerful, intense, beautiful Finnish film and predicts that its three main leads have great potential international careers in front of them if they so desire… (See our review)

With three Oscar nominations, ‘Flee’ is part of the Best of the Year category, directed by Jonas Poher Rasmussen and based on the true story of Amin, and how he fled Afghanistan to Denmark. ACV has covered Flee from its world premiere in Sundance last year. (See here for stories).

There is a strongly British flavour to Hetain Patel’s short film ‘Trinity’ , whilst Pradipta Ray’s ‘Muhafiz‘ (meaning ‘protector’) is also part of the Strength in Vulnerability programme which looks at people of colour stories. The short films are divided into three different programme strands.

Director Arun Fulara’s short, ‘SUNDAY’, is part of the Everything Changes programme, whilst ‘Queer Parivaar’ by Shiva Raichandani, ‘Coming Out With The Help Of A Time Machine’ by Naman Gupta and ‘The Syed Family Xmas Eve Game Night’ directed Fawzia Mirza, are all part of the Family Affairs shorts programme.

An acclaimed artist who works across media, he explores the female voice and shows that physicality has its own language, and the visual references to his Indian heritage aim to narrate a British Asian experience on screen. ‘Trinity’ is part of his trilogy of short films, and is the last of the three, after ‘The Jump’ (2015) and ‘Don’t Look at the Finger’ (2017), bringing together different aspects of the film world over five years. Acv has covered Patel’s work over the years.

Hindi film ‘Muhafiz’ (meaning ‘protector’) follows a gay Hindu man as he plucks up the courage to defend a Muslim against sectarian violence. Also an actor and writer, director Ray wrote and directed ‘The Night is Young’ in 2012, a short drama about three couples-one straight and two queer- who defy the norms to be with each other.

Fulara’s ‘SUNDAY’ ( which he wrote and directed) sees Kamble, a middle-aged gay man form a crush on the younger man who cuts his hair. Based in Mumbai, Fulara has written and directed another short film ‘My Mother’s Girlfriend’, a story of two women who have to keep their relationship secret from one of their sons.

‘Queer Parivaar’ by UK-based Raichandani is set on the eve of queer couple Madhav and Sufi’s wedding when a mysterious woman arrives with a secret family history. Raichandani is a non-binary British-Indian filmmaker and performance artist, and released a documentary ‘Peach Paradise’ earlier this year, about a non-binary Japanese-Irish drag artist working on the UK cabaret scene as they try to dismantle racial stereotypes. There was a special screening of their film in London last night for cast and crew. Well-known artist and media figure Asifa Lahore talked about their role in the film and about their career as an actor.

Gupta’s American-made sci-fi dramedy ‘Coming Out With The Help Of A Time Machine’ follows Sid as he tries to work out the best way to come out to his parents multiple times, with the help of his time machine, which takes him back to the same moment to ensure it goes perfectly. Gupta is a director and writer and co-wrote TV series ‘Civil Disobedience’, an anthology of views on social issues, which has won various awards.

Other films in the festival include West Africa’s first film about homosexuality, ‘Dakan’, which is directed by Mohamed Camara, and follows two gay men from different societal classes as they fight to be together; and Korean film ‘A Distant Place’ directed by Park Kun-Young, about a sheepherder raising his niece being visited by two people from his past.

For all listings and further details, please see: https://whatson.bfi.org.uk/flare/Online/default.asp

Muhafiz and Trinity as part of the Strength in Vulnerability programme will be screened on March 18 (5.50pm) and March 19 (4.20pm) at BFI Southbank, NFT3.

SUNDAY as part of the Everything Changes programme will be screened on March 21 (8.30pm) BFI Southbank NFT1.

Queer Parivaar, Coming Out With The Help Of A Time Machine and The Syed Family Xmas Eve Game Night as part of the Family Affairs programme will be screened on March 17 (8.40pm) and March 18 (8.40pm) at Studio.