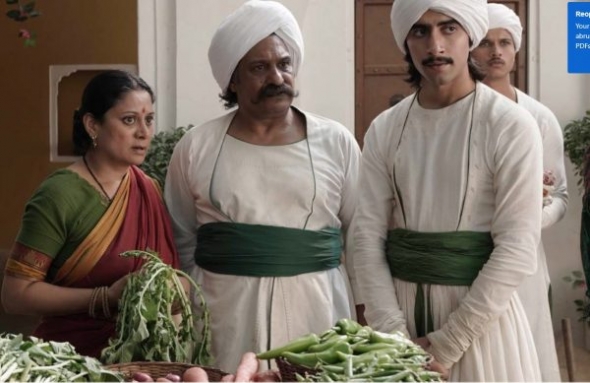 The build-up is over for ITV’s latest period drama as viewers are transported to historical India – complete with lavish costumes and stunning set locations.

set in 1795 (before the British Raj), ‘Beecham House’ follows the story of John Beecham (Tom Bateman), a former East India Company soldier who is looking to settle himself and his extended household in Delhi.

However, the mysterious Mr Beecham is hiding many secrets, particularly when he arrives with a mixed-race baby without any explanation.

And two episodes later, we still know very little of the ruggedly handsome John Beecham – who is quickly becoming a favourite with viewers.

What we do know is his house is slowly filling up with a variety of clashing characters – particularly his mother, Mrs Beecham (Lesley Nichol).

Brash and blatantly racist, she doesn’t do much to hide her disgust at ‘the natives’ and brings along Violet Woodhouse (Bessie Carter) for some not-so-subtle matchmaking for John.

However, John has his eyes set on English governess, Miss Osbourne (Dakota Blue Richards). And the feeling seems mutual despite the icy cold treatment she receives from his mother.

The latest episode also added John’s brother into the mix who has been MIA for some time. Slowly becoming another favourite amongst viewers, we can tell the flirtatious Daniel Beecham (Leo Suter) is going to cause havoc as he is already eyeing up the nursemaid, Chanchal (Shriya Pilgaonkar).

Another mysterious Indian woman, Chandrika (Pallavi Sharda) has also entered the house – with John claiming she’s the baby’s Aunt. But do we believe him?

As if that wasn’t enough to keep up with, John’s rivals, the Emperor (Roshan Seth) and General Castillon (Gregory Fitoussi) are keeping a close eye on him as they suspect he’s still involved with the controversial East India Company.

Set in the capital, but filmed in Jaipur, Beecham House is a true feast for the eyes – with exotic locations and colours galore.

But with just four episodes to go, we’re hoping more will be revealed in the next episode as we’re left many unanswered questions. Particularly, who exactly is the baby’s mother…?