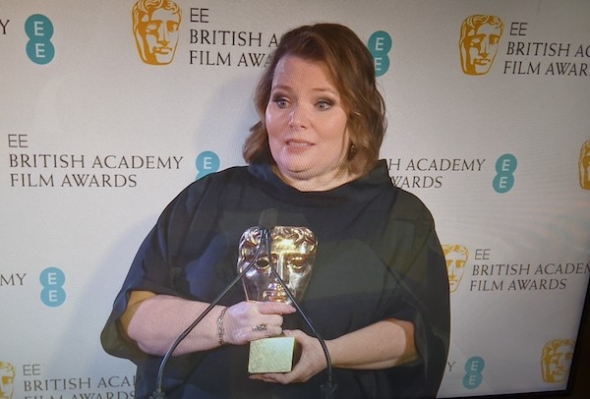 JOANNA SCANLAN who won the Bafta in the Leading Actress Category tonight paid tribute to first time ‘After Love’ film director Aleem Khan and his mother – both of whom were in the audience at the Royal Albert Hall.

On accepting her first Bafta (she has been nominated for the TV equivalent three times), she also praised the BFI, and the BBC which helped to finance such “small films”.

Though not autobiographical,  ‘After Love’ tells the story of a white British woman whose devotion to her husband includes becoming a Muslim – and the film starts with his sudden death and her discovering that her deceased husband has a parallel family across the Channel in Calais. She travels across the sea to find out more but encountering the family she reveals nothing.

It is a beautifully calibrated film exploring the contours of Britishness, identity, culture and faith and other very universal themes such love, memory and grief.

It is also a work of huge promise –  Khan both wrote and directed the film and revealed a lot about the inspiration and origins for ‘After Love’ in his interview with us when the film was released in June last year. (Please see http://asianculturevulture.com/portfolios/after-love-british-writer-directors-first-film-is-a-gem-and-explores-cultural-difference-and-family-ties/)

Scanlan, speaking to the press after receiving her Bafta, said it was a privilege and honour being an actor and that she loved working with Khan.

“The exciting thing is that he is an inspiration to other people who want to tell their story in their own way.”

She added: “He has such a beginners’ mind and an uncompromising vision. This is his own story disguised in a lot of emotion. It’s his story and it’s from his solar plexus.”

Scanlan said she was excited about what might Khan go onto do.

She ended her podium win address with a salute to her husband, Neil.

“There is no such thing as after love,” she said to the thousands watching inside the Royal Albert Hall (RAH).

In another of the other remarkable stories of the night, ex-Metropolitan police cop Gamal G Turawa revealed how in 2002 he stood on a station platform and had considered suicide. He is the subject of the short film, ‘The Black Cop’ which won the Best British Short Film.

Directed by Cherish Oteke and part financed by the Guardian, the film explores the experiences of Turawa when he served in the force. ACV has not seen the film.

Turawa, speaking at the winners’ press conference and picking up where he left off on stage at the RAH, said he felt things were finally changing and a wider range of stories were being told.

When he revealed how far his personal journey had come to the press, he became emotional and the audience simply burst into applause.

Oteka said the win was a sign that there was improvement – and different people’s stories were not just being told but recognised and appreciated. She said finally Diversity was being akcnowledged – a theme Lashana Lynch also made in her speeches after getting the EE Rising Star Award which is voted on by the public.

It was also a good night for ‘Coda’ which one in one of the most high profile categories with Troy Kotsur winning in the Supporting Actor Category and writer-director Sian Heder in the Best Adapted category.

Best Film went to Jane Campion’s ‘The Power of the Dog‘ which had its UK premiere at last year’s London Film Festival.

Among the presenters this year were Asim Choudhry, Conrad Khana and Himmesh Patel.

The Harder They Fall won Outstanding Debut for Jeymes Samuel.

Summer of Soul (…Or, When the Revolution Could Not Be Televised) won Documentary.

Drive My Car won Film Not in the English Language.

Leading Actor was won by Will Smith for King Richard.

Leading Actress was won by Joanna Scanlan for After Love.

The EE Rising Star Award, voted for by the public, went to Lashana Lynch.

Privacy & Cookies: This site uses cookies. By continuing to use this website, you agree to their use.
To find out more, including how to control cookies, see here: Cookie Policy
← SXSW 2021 – ‘Alone Together’ – music documentary on pop star Charli XCX reveals artistic process and creators say losing control helped…
SXSW 2021: A great festival experience as Barry Jenkins and composer Nicholas Britell discuss work on forthcoming ‘The Underground Railroad’ →